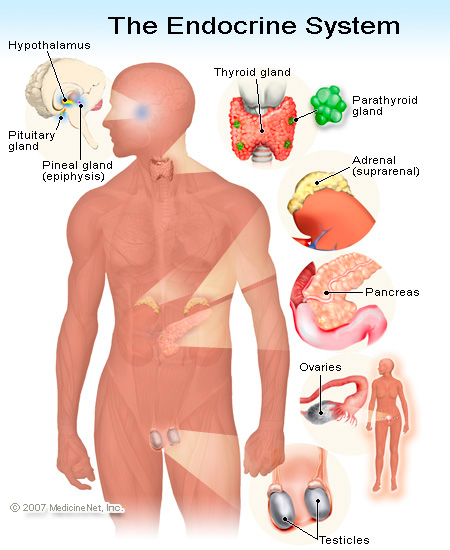 The Endocrine System, includes all the glands and hormones within those glands, throughout the human body. The nervous system  stimulates and controls the glands, along with chemical receptors inside the blood, and hormones developed by other glands. The Endocrine system regulates organ functions. so that the body’s gland can maintain homeostasis. Hormones regulated a high level of body processes such as cellular metabolism, reproduction sugar and mineral homeostasis, digestion, heart rates and sexual development.

The Basic Anatomy of the Endocrine System

The first part of the Endocrine system is the Hypothalamus. The Hypothalamus is a part of the brain , that is superior and anterior to the brain stem and inferior to the thalamus. It has many different jobs, serving the body’s nervous system. It is also responsible fro controlling the endocrine system directly through the pituitary gland. The hypothalamus also contains special neurosecretory cells that secrete hormones. 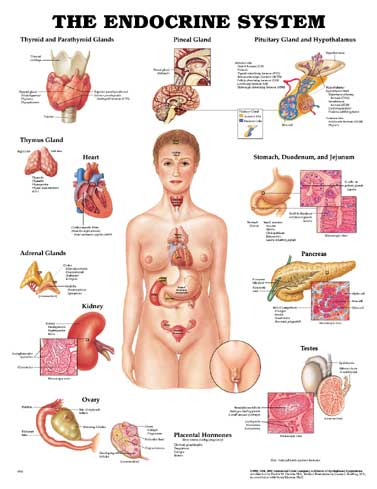 The pineal gland is quite small, mass of glandular tissue, and have the shape of a pinecone. This is found in the posterior region of the thalamus. The pineal gland will produce  the melatonin hormone that regulates the body’s circadian rhythm, also known as  the sleep-wake cycle. The retina’s photoreceptors inhibits stimulation to the pineal gland. Melatonin produce in low light or darkness, from the sensitivity of light. When the pineal gland becomes active when the body begins to produces more melatonin, the body will feel drowsy at night time.

The Calcitonin gets released when calcium ion levels in the blood increase above a set position. By aiding the absorption of calcium into the bods, calcitonin reduces the concentration of calcium ions inside the blood. Triiodothyronine and Thyroxine hormones work to regulate the body’s metabolic rate. With higher levels of T3 and T4 can cause growing cellular activity and energy usage.

The adrenal cortex:  creates many of the cortical hormones in three different classes:glucocorticoids, mineralocorticoids, and androgens.

Adrenal medullla creates hormones phinephrine and norepinephrine through  the sympathetic division of the autonomic nervous system stimulation. Hormones help improve “fight-or-flight “response to stress through increased flow of blood to the brain and muscles. These hormones affect the breathing, heart rate and blood pressure, while the flow of blood to  organs  that are not involved in responding to emergencies.

The Pancreas, located in the abdominal cavity, inferior and posterior to the stomach, is a large gland. The pancreas is thought to be the a heterocrine gland because it contains exocrine and endocrine tissue. The endocrine cells make up only 1% of the pancreas total mass. Endocrine cells are found in small sections within the pancreas called islets of Langerhans. Inside the islets there are two types of cell. These are alpha and beta cells. Alpha cells creates the glucagon hormone, which raises blood glucose levels.  Glucagon initiates certain liver and muscle cells to break down polysaccharide glycogen to release glucose into the bloodstream. Beta cells create  the insulin hormone, that lowers the blood glucose level after eating meal. The insulin will initiate the absorbing of glucose form blood into the cells, which are added into glycogen molecules for storing.

Gonads are different in women and men. In females the gonads are the ovaries and males testes are the gonads. They both are responsible for creating sex hormones for the body. These sex hormones determine the secondary sex characters for adult males and females.

The testes are a pair of ellipsoid organs that are located in the male scrotum. They produce androgen testosterone in males after they begin puberty. Testosterone effects many different parts of the body. including bones, muscles, sex organs and the hair follicles. Hormones will trigger growth and increase strength and mass in the muscles and bones, as well as accelerating the growth of long bones during the males adolescence. During puberty the testosterone will control the development of hair for males, including pubic, chest, back, legs, and facial hair. Men who inherited genes for baldness testosterone will cause onset of androgenic alopecia or male pattern baldness during this time.

Ovaries are two almond shaped glands that are found in the pelvic body cavity superior and lateral of the uterus in females. The ovaries create female sex hormones estrogen and progesterone. Estrogen are a group of hormones that are released during puberty and triggers the development secondary sex characteristics such as uterine development, breast growth and pubic hair. Estrogen also causes increase bone growth during the adolescence period.Progesterone is active during ovulation and pregnancy in females e and maintains the conditions so that females scan support development of the fetus.

The thymus is a soft organ shaped like a triangle, found on the chest posterior of the sternum. The thymus regulates the hormones called thymosins that help guide and create T-lymphocytes during the fetal development phase and childhood. T-lymphocytes, developed in the thymus go on to guard the body from pathogens for the rest of a person’s life. The thymus becomes inactive during puberty and replace with adipose tissue throughout the person’s life.