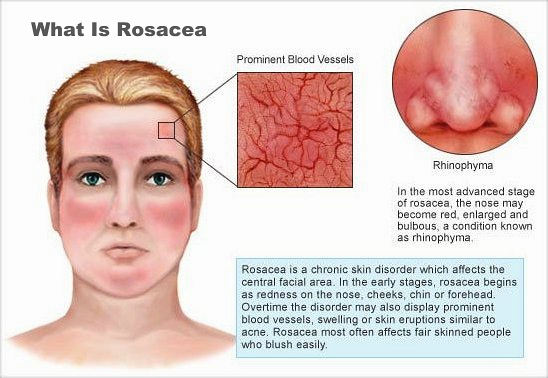 Rosacea is a prevalent skin condition that causes redness on the face and often will produce small red pus filled bumps. Although rosacea can occur in anyone, it often affects women, who are middle and have fair skin tone.
Rosacea’s redness can slowly spread beyond the nose and cheeks to chin and forehead. It can spread to the ears, chest and back, which can be read all the time.
There are four subtypes of Rosacea:
Erythematotelangiectatic rosacea: Redness, flushing, visible blood vessels.
Papulopustular rosacea: Swelling, Redness, and acne-like breakouts.
Phymatous Rosacea: the skin thinking and have a bumpy texture.
Ocular rosacea: Eyes red and irritated, eyelids can be swollen, and the person may have what looks like a sty.

If rosacea is left untreated, it can exacerbate over time. Rosacea symptoms or signs may flare up over a period of weeks to several months and then stop before flaring up again. Rosacea can mistake as an allergic reaction, acne or another skin problem.

Although there is no cure for rosacea, treatment can be used to reduce the sign and symptoms. If you have continual redness in the face, it may be helpful to see your doctor for the proper diagnosis.

Signs and Symptoms of Rosacea

The signs and symptoms of rosacea may include the following: 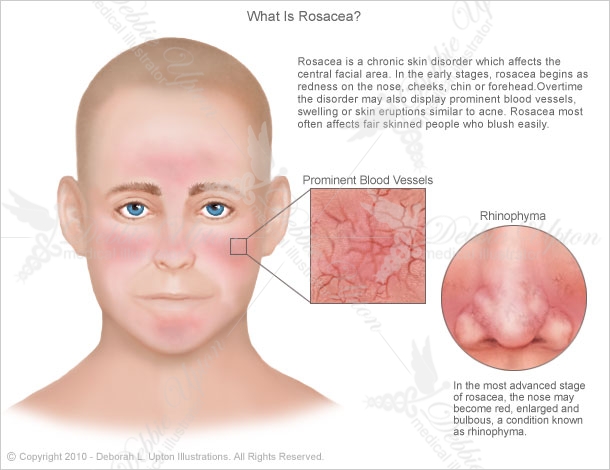 Facial redness – Rosacea normally causes a prevalent redness in the middle portion of your face. Small blood vessels on your check and nose will often become visible and swell.
Swollen red bumps – Individuals who have rosacea also develop bumps on their face that resemble acne. These bumps sometimes have pus inside. Your skin may feel tender and warm.
Eye trouble- Nearly half of the people who have rosacea also experience eye dryness, swollen, irritated and reddened eyelids. IN other people rosacea eye symptoms occur before the skin symptoms.
Enlarge Nose – Rarely, rosacea can cause the skin to become thicker on the nose, Rosacea can cause the nose to appear bus (rhinophyma). This happens more often in men than women.

The cause of rosacea is not known, but can be due to some combination of environmental factors and genetics.

Several factors can trigger or aggravate rosacea by increasing blood flow to the surface of your skin. Some of these factors include the following:

In rare and severe cases, The oil glands (sebaceous glands in the nose and at times the check can become enlarged and real in a build of tissue around the nose. The condition called rhinophyma. This complication is much more prevalent in men and develops slowly over a period of years.

There is no accurate test for rosacea. Instead, physicians rely on the history of the patient symptoms and a physical examination of the patients skin. Sometimes the doctor may need to rule out other conditions such as other forms or psoriasis, acne, various forms or eczema or lupus, which can sometimes cause similar signs and symptoms.

There is no cure for rosacea; treatments can control and reduce the symptoms and signs. Most of the treatments consist of a combination of prescription treatments and particular lifestyle changes on your part.

Medications
Prescription drugs use for rosacea can include:

Antibiotics are used for rosacea may also have an anti-inflammation effect. They may come in the forms of lotions, creams or gels to spread over the affected areas of the skin or in pills to take orally. Antibiotic pills are normally most useful in the short term. However, they can also cause more side effects.
Acne Medications 0 If antibiotics do not work your doctor may recommend trying isotretinoin (Amenesteem, Claravis) This is a very powerful medication that is mostly used for severing cystic acne. However, it also helps break up acne like lesions of rosacea. You should not use this drug during pregnancy since it can cause birth defects.

The time frame of the treatment depends on the type and severity of your symptom, but you will notice an improvement in one month or two months. Since symptoms can recur if you stop taking medications, long-term routine treatment is often needed.

Enlarge blood vessels, some redness, and changes due to rhinophyma often become permanent. Sometimes surgical methods such as laser surgery and electrosurgery, may reduce the visibility of blood vessels, remove tissue bump around your rose and improve your appearance.

Rosacea Lifestyle and Home Remedies.
One of the most important aspects you can control with rosacea is to minimize your exposure to the element that can cause a flare-up. Your should find the factors that affect you, so you avoid them. Some suggestions to prevent flare -ups include:

Wear broad -spectrum sunscreen with an SPF or 30 or higher.
Protect your face in the winter with a ski mask or scarf.
Wash problem areas with gentle cleanser such as Cetaphil or Dove
Avoid facial products that contains skin irritants and alcohol.
Avoid rating your skin with by rubbing or touching it too much.

Anatomy of the Butt (buttocks)

What is Acne: Symptoms, Causes, Treatments and Prevention