Well Robotic Surgery is the use of Robots in performing a surgical procedure. There are several major progresses that can credited to Robotic Surgery. The first is remote surgery, second minimally invasive surgery and lastly unmanned surgery. Robotic surgery can be much more precise and than human surgery. There are many more advantages such as miniaturization, smaller incisions resulting in  decrease blood loss and quicker recovery times thus, less pain. Use of robotics is growing all across global in medical operating rooms.

Many of you may know of  the Puma 560 in 1985. This robot was used to place a needle into the brain for biopsy. It was using CT guidance.  In 1988  the PROBOT was developed by the research at the Imperial College of London. To perform prostatic surgery. Later the ROBODOC by Integrated Surgical Systems was introduced in 1992 to mill out precise femur fittings for a hip replacement  surgery.

The most popular surgical robot would be the DA Vinci Surgical System. This used along with Computer Motion allowed for break thoughts in robotic procedures. 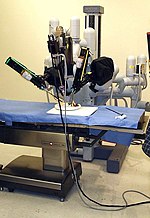 Created by Intuitive Surgical the DA Vinci allowed for complex surgeries with a minimal invasive approach.

The Da Vinci System consist of three parts: The surgeon’s console, the patient-side robotic cart w/ 4 arm controlled by the surgeon and high- definition 3D vision system. Providing a controlled Camera allowed for the surgeon to have a clear unobstructed view.

Robotic Surgery is becoming more and common. As health practitioners strive to develop better outcomes for the patience. Robotic instruments offers the accuracy and precision that is needed to lower risk and increase the probability of a successful procedure.