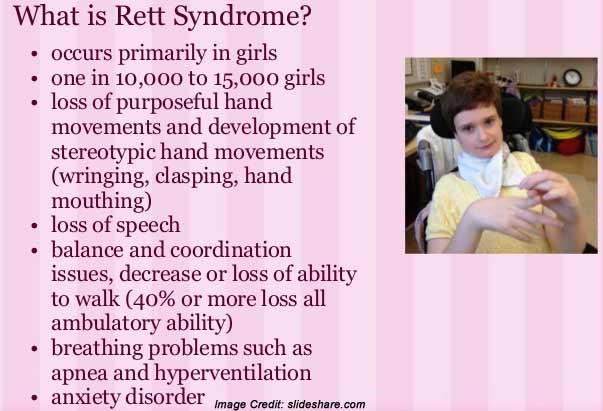 Rett syndrome is a rare condition, a severe neurological disorder that strikes mostly girls; It’s usually discovered in the first two years of life. A child’s diagnosis of Rett syndrome can feel overwhelming to parents, in part due to the lake of understanding and awareness of the diseases. Even though there’s no cure, early identification and therapy may help girls and families who are impacted by Rett syndrome, In the past, it was thought to be part of the Autism Spectrum DIsorder. Scientists now know that it is mostly genetically based.

Symptoms
The age when symptoms appear varies, but most babies with Rett syndrome seem to grow normally for the first six months before any signs of the disorder are noticeable. The most regularly change usually show up when babies are between 12 and 18 months, and they can be immediate or progress slowly. Symptoms of Rett syndrome;

Stunted and slowed growth. The brain doesn’t grow properly, and the head is usually small (physicians call this microcephaly). This slower growth becomes clearer as the child gets older.

Difficulties with hand movements. The vast majority of children with Rett syndrome lose the use of their hands. They tend to wring or rub their hands together.
No language skills. Between ages, 1-to 4, social and communication skills start to decline. Childen with Rett syndrome stop talking and can have extreme social anxiety. They may need to stay away from or not be interested in other people, toys, and their surroundings.
They may have problems with muscles and coordination. This can make walking awkwardly.
There can be trouble with breathing. A child with Rett may have uncoordinated or uncontrolled breathing and seizures, which may be very fast breathing (hyperventilation), swallowing salvia, forceful exhaling of air.
Children with Rett syndrome also are more likely to become agitated and irritable as they get older. They may cry or scream for elongated periods of time, or have long spells of laughter.

Symptoms of Rett syndrome normally don’t get better over time. It is a lifelong ailment. Often the symptoms deteriorate very slowly or don’t change. It’s unusual for people with Rett syndrome to be able to live independently.

Causes of Rett Syndrome
Most children with Rett syndrome have a deviation on the X chromosome. Precisely what this gene does to prompt Retts development, or how its mutation leads to Rett syndrome, is not clear. Researchers believe that the single gene may regulate many other genes involved in development.

Although Rett syndrome is genetic, there are rarely cases where children inherit the defective gene from their parents, Rather, it’s a chance mutation that occurs in DNA.

When males acquire the Rett syndrome mutation, they rarely live past birth. Boys possess only one X chromosome (instead of the two girls have), so the effects of the disease are much more grave and almost invariably fatal.

Diagnosis
A diagnosis of Rett syndrome is consist of observation a girl’s pattern of symptoms and behavior. Physicians can deliver the diagnosis based on these observations alone and by speaking with the girl’s parents about different clues, like when the symptoms began.
Becuase Rett syndrome is rare; doctors will first rule other conditions, including autism spectrum disorder, metabolic disorders, cerebral palsy, and perinatal brain disorders.

A genetic examination can further confirm the diagnosis in 80% of girls with suspected Rett syndrome. The tests may also predict how severe it will be.

Treatments
Despite there being no cure for Rett syndrome, there are treatments that can help alleviate some of the symptoms; however, children should continue these treatments for their entire life.
The best prospects available to treat Rett syndrome include:

Experts conclude that therapy can assist girls with Rett syndrome and their parents. Some girls may be able to go to school and learn sufficient social interaction.
Medicines can treat some of the symptoms with movement in Rett syndrome Medication can also help restraint seizures.
Many girls with Rett syndrome can grow into adults living at least into their middle age. Research is studying women with the disease, which only widely recognized the last 20 years.