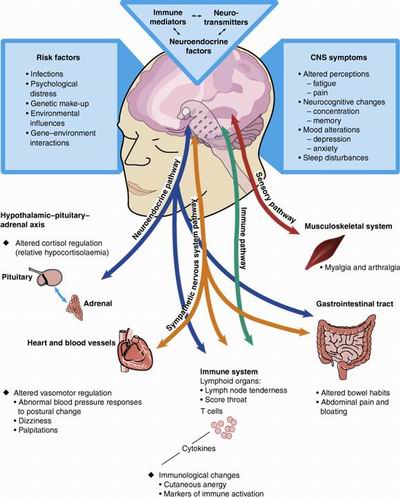 Chronic fatigue syndrome or CFS is a complex disorder with debilitating character by profound fatigue that is is improved by bed rest. This condition is can have devastating effects on someone’s quality of life. Individuals with CFS have an overwhelming amount of tiredness and several notable symptoms that are not improved by bed rest that can get worst after physical activity or mental exertion. People with CFS have lower levels of activity than they once had before they become ill.

Other than severe fatigue, other symptoms include muscle pain, impaired memory or mental concentration, insomnia, post-exertion malaise that can last for over 24 hours. In certain the effects of CFS can last for years.

Research has not indicated what causes CFS, and there is no test that can diagnose CFS. Also, many illnesses have fatigue as a symptom; physicians need to rule out other conditions, before determining if some one has Chronic Fatigue Syndrome.

There are several case definition for CDS, and all require fatigue to be one of the symptoms. CDC uses the 1994 CFS case definition which requires meeting three criteria.

1.The person must have had severe chronic fatigue for six consecutive months or longer, and the fatigue is due ton ongoing exertion or other medical conditions associated with fatigue ( these other conditions need to be urled out by a doctor after diagnostic test have been conducted)

2. The fatigue significantly interferes with daily activities and work.

3. The individual concurrently has 4 or more of the following eight symptoms:

Unable to achieve rested and refresh sleep
Muscle Pain
Headaches of a new type, severity, pattern
tender lymph nodes in the armpit or neck
A sore throat that is recurring and frequent
headaches that occur in a new pattern or severity
post-exertion exhaustion lasting more than 24 hours.

These symptoms should have persisted or recurred during six months, and they cannot have appeared before the fatigue.

Causes of Chronic Fatigue Syndrome
Despite a vigorous research, scientists have not identified what it is that causes CFS while a single cause for CFS may yet be identified. IT is possible that CFS has multiple triggers. Some of these possible cause of CFS might be:

Immune Dysfunction
Infections
Nutritional deficiency
stress that activates the a six where the hypothalamus, pituitary, and adrenal glands interact (the HPA axis)
Abnormally low blood pressure that can potentially cause fainting or neurally mediated hypotension)

Symptoms of CFS
The primary symptom of CFS is not explained, severe fatigue lasting, at least, six months that is not improved by resting in the bed, a that it get worse after physical effort or mental exertion. People with CFS experience fatigue so strong that their activity levels and satin mama decline dramatically. This fatigue is not the only symptom, and some parent may not be the symptom that bothers them the most.

In the 1994 case definition, the fatigue of CFS is accompanied with at least four of 8 of the characteristic symptoms lasting, at least, six months. These symptoms include:

Unable to achieve rested and refresh sleep
Muscle Pain
Headaches of a new type, severity, pattern
tender lymph nodes in the armpit or neck
A sore throat that is recurring and frequent
headaches that occur in a new pattern or severity
post-exertion exhaustion lasting more than 24 hours.

Because there is no blood test, brain scan or another lab test to diagnose CFS, it is a diagnosis that can only be give one all other possible illnesses are ruled out. A doctor will get a full detailed history of the patient and then conduct a thorough physical and mental health exam. The doctor can conduct laboratory screening test to help identify other possible causes. There may be an additional test that the patient can take. If the patient has had severe fatigue for six months but does not have at least l4 of the eight symptoms of acts, the doctor will make a diagnosis of idiopathic fatigue or fatigue of unknown cause.

Managing chronic fatigue syndrome can be a painful illness. There is no cure, no prescription drugs that have developed specifically for CFS and symptoms can vary a lot over time.Thus, people with CFS should closely monitor their health and let their doctor know of any changes; doctors should regularly monitor their patient’s conditions and adjust treatment as needed.