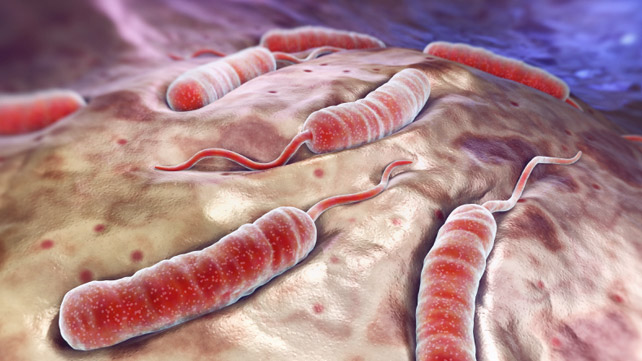 Cholera is a bacterial disease that normally spreads through contaminated water. Cholera causes dehydration and severe diarrhea. If cholera is not treated, it can be fatal within a short span of a few hours, even in people who were are considered healthy.

Modern sewage and water treatment have virtually eliminated cholera in many industrialized countries. The last major outbreak in the United States happened in 1911. However cholera is still present in South Asia, Haiti, Africa, Haiti, and central Mexico. The risk of cholera epidemics is highest when there are natural disasters, war, or poverty, which forces people to live in crowded condition without access to adequate and clean sanitation
Cholera is easily treated. However death, typically results from severe dehydration that can prevent with a simple and inexpensive rehydration solutions.

Most people that are exposed to cholera bacterium (Vibrio cholera) will not become ill and may never know they have been infected. How we, because they shed cholera bacteria in the stool for seven to 14 days, the contaminated water can still infect others. The most prevalent cases symptoms of cholera cause mild to moderate diarrhea and is often difficult to distinguish from diarrhea caused by other problems.
1 in 10 people who are infected with cholera develops signs and symptoms of cholera, usually within a few days of infection

Symptom of Cholera include

Signs and symptoms of cholera dehydration include irritability, irregular heartbeat (arrhythmia)little to no urine output, low blood pressure, sunken eyes, dry mouth, extreme thirst, lethargy dry and shriveled skin that is slow to bounce back wen you are pinched into a fold,

Dehydration can lead to rapid decline of minerals in your blood (electrolytes) that control the balance of fluids in your body. This is called an electrolyte imbalance.

An electrolyte imbalance can develop serious signs and symptoms such as:

Signs and symptoms of cholera in children

Generally, children will have the same signs and symptoms as adults, but they may be particularly sensitive to hypoglycemia or low blood sugar, due to fluid loss, causing: 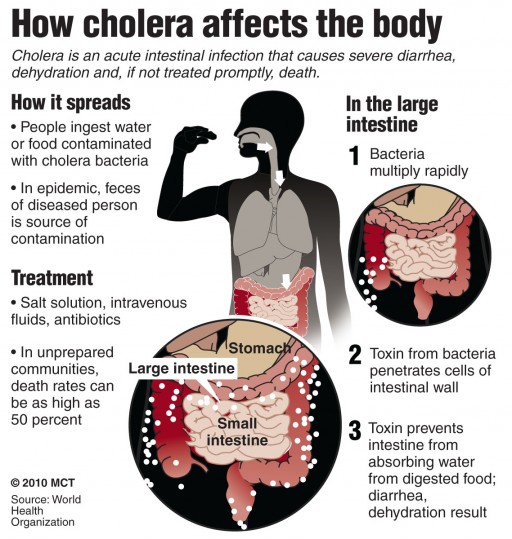 When to see a Physician

The risk of cholera is very low in industrialized countries, even in endemic areas where you are not likely to become infected if you follow food after a recommendation. However there are sporadic cases of cholera occurring throughout the world, if you develop severe diarrhea after visiting an area wit active cholera, see your doctor.

Causes of Cholera
A bacterium called Vibrio cholera cause the cholera infection. The fatal effects of cholera are caused by a potent toxin called CTS and the bacteria created in the small intestine. CTX attaches to the intestinal walls, where it impedes the normal flow of sodium and chloride. this causes the body to secrete large amounts of water. Leading to diarrhea in rapid loss of fluids and salts (electrolytes)

Contaminated water supplies are the main source of cholera infection, although uncooked fruits and vegetables and raw shellfish and other foods can have V. cholera.
Cholera bacteria has to life cycles on in the environment and another one in humans.

Cholera bacteria in the environment.

Cholera bacteria occurs in coastal waters, in which they attach to any copepods, tiny crustaceans. The cholera bacteria travels with their host spreading the word as the crustaceans follow their food source- certain types of algae and plankton that grow tremendously when the water departures increase. Algae growth is fueled additionally by the urea found in sewage and in agricultural runoff

Because more than a million cholera bacteria – which is approximately the on you find in contaminated water, are needed to cause illness, cholera usually is not transmitted through casual person-to-person contact/

The most common methods of cholera infect are standing water and certain food types, which include raw fruits, raw vegetables, grains, and seafood.

Everyone is susceptible to cholera, with the exception of infants who gain immunity from a mother who has previously had cholera. Yet, certain factors can make you more vulnerable to the bacteria or more likely to experience severe signs and symptoms. Risk factors for cholera include:

Complications from Cholera
Cholera can quickly become fatal, due to the rapid loss of large amounts of fluids and electrolytes, leading to death in two to three hours. In less extreme circumstances, people who do not receive treatment may die of dehydration and shock hours or days later after the symptoms first appear.
Although shock and severe dehydration are the most devastating complications, other can occur, including

Although severe cholera may be evident through the symptoms in endemic areas, the only way to establish a diagnosis is to identify the bacteria in a stool sample.
Rapid cholera dipstick test is available, enabling health care providers in a remote area to confirm the diagnosis of cholera earlier. Quicker confirmation helps reduce death rates at the start of cholera outbreaks and leads to faster public health interventions for outbreak control.

Cholera is rare in developed countries with a few cases related to travel outside to developing countries or regions that are contaminated and improperly cooked seafood.

If you are traveling to a cholera-endemic area your risk of contracting the disease is extremely low if follow these precautions. 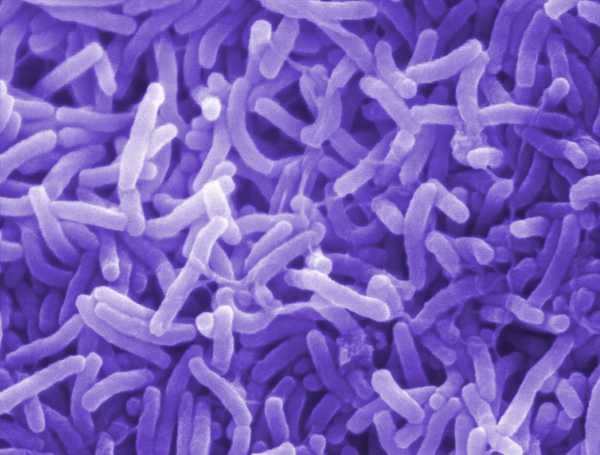 Cholera vaccine – for adults traveling to cholera- affected areas, the vaccine is now available in the US. The U.S food and Durg administration approved Vaxchora, a vaccine for prevention of cholera. It is a liquid does take by mouth 10 days before travel.