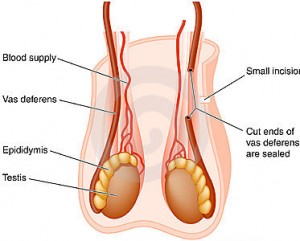 A Vasectomy is a method of birth control which is considered permanent. A vasectomy prevents the related of sperm when a man ejaculates.

In a vasectomy, the vas deferens both testicles are cut, clamped or sealed. This prevents sperm from mixing into semen that is ejaculated from the panels. Eggs cannot become fertilized if there are no sperm present in the semen. Although the testicles continue to produce sperm, the sperm is reabsorbed into the body. This phenomenon happens when sperm is not ejaculated after a while, regardless if a person has had a vasectomy or not. Due to the tube Research before seminal vesicles and prostate, a man still will ejaculate the same amount of fluid.

It typically takes several months after the vasectomy for all sperm to be reabsorbed or ejaculated. A man will have you use another method of birth control until he has a semen sample tested and shows zero sperm count. Otherwise, he still can get his partner pregnant.

What happens during a Vasectomy 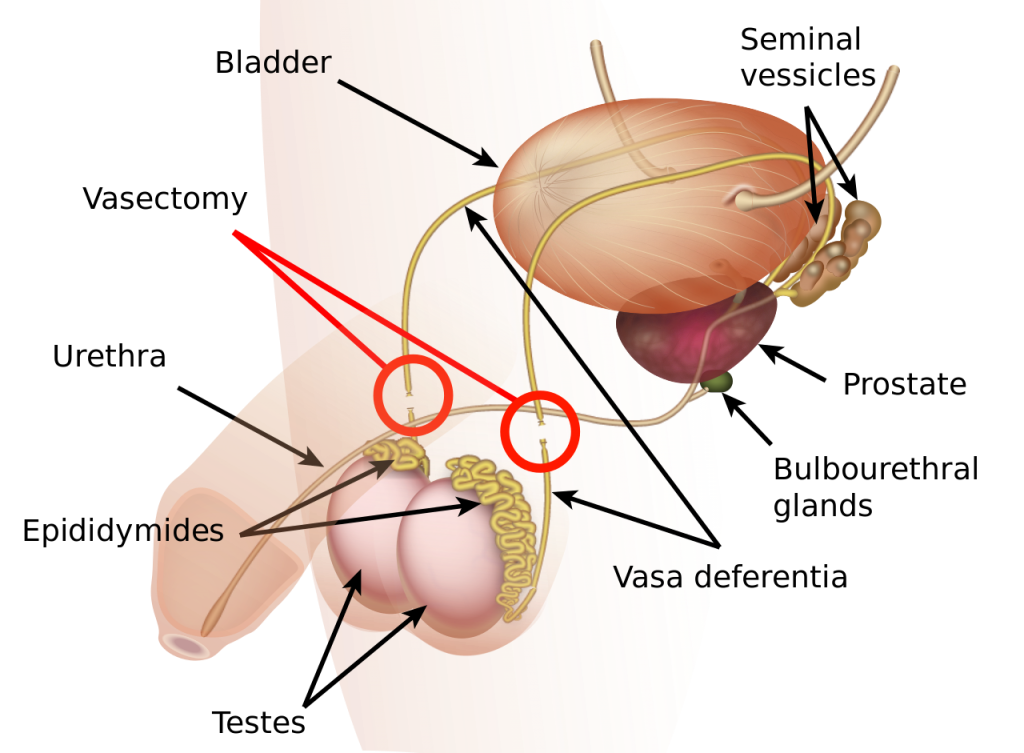 Before the procedure the testicles and scrotum are cleaned with antiseptic and hair is possibly shaved.
The patient is provided an oral or intravenous (IV) medicine to relax and make him sleepy. If this medication is taken, he may not remember much about the procedure.
Doctor touching locates each vas deferens.
A local anesthetic is injected into the region of the scrotum.
The doctors will make one or two small incisions in the scrotum. Through the incision, the two vas deferens tubes are cut. The two ends of the vas deference are stitched tied, or sealed. Eletctocuatyr may be used to seal the ends with heat. Scar tissue formed after surgery also blocks the tube as well.
The vas deferens is replaced inside the scrotum, and the skin is sealed with stitches that disintegrate and do not have to be removed.

The procedure will only take 20 to 40 minutes can be implemented in an office or clinic. It can be done by a urologist, general surgeon, or family medicine doctor.

There also not scalpel vasectomy, in which the technique that uses a small clamp with pointed ends. Rather than using a scalpel to make an incision into the skin, a clamp is poled through the skin of the scrotum and then opened. The benefits of using a no-scalpel vasectomy are that there is less bleeding, and produces a smaller hole in the skin, and few complications. No- couple vasectomy is a proven to be just as effective as a traditional vasectomy.

What to expect after a Vasectomy Surgery

The scrotum will be numb for anywhere between one to two hours after a vasectomy. Cold packs should be applied to the surgical site, as the patient lay on his back have children the day. The patient should wear a jock strap or snug underwear to help alleviate any discomfort and protect the area or the procedure.

There may be some swelling and minor pain in the scrotum for the next several days following the surgery. One should avoid work if it were physically strenuous,f or the next two days. All heaving lifting should be avoided for at least a week,

Sexual intercourse can continue as soon as the patient is comfortable, which typically happens in about a week’s time. However, he can still get his partner pregnant, because his sperm count will not be zero. He must use another method of birth control until he has a follow-up test two months after the vasectomy ( or 10 to 20 ejaculations over a shorter period) Once he his a zero sperm count, no other form of birth control is needed.

Most men will go back to their doctors to have their sperm count check, although there is a home-based test available.

A vasectomy will not affect sex drive, the sensation of the organism, ability to have erections and ability to ejaculate. You may have occasional side aching in your testicles during sexual arousal for a few months after the surgery.

Why It is Vasectomy Done

A vasectomy is a permanent approach to birth control; It is one method that is used when one is sure he does not want to have children in the future.

How Well Does a Vasectomy Work?

Vasectomy is a very efficient method (99.85%) of birth control.1 to 2 women out off 1,000 will are at risk fo failure for unplanned pregnancy in the first year after the partner underwent a vasectomy.

Risk of failure
Pregnancy can occur after vasectomy because of::

Failure to use added birth control method until sperm count is zero. It can take anywhere from 10 to 20 ejaculations before semen is clear of sperm.
Rare reconnection of the vas deference or an opening, in the end, will allow sperm to mix with semen.

Bleeding can occur underneath the skin, causing swelling or bruising.
Infection can occur at the site of the cut or incision. IN rare cases, an infection may develop within the scrotum.
Inflammation of the tubes that move sperm from the testicles called congestive epididymitis
In rare cases, the vas deferens can re-canalize growing back together enabling the man to become fertile again.
Sperm can form a vas deferece into tissue around it, forming sperm granuloma, or a small lump. This is usually painful, and can be treated with rest.

What should You Think About with a Vasectomy

Vasectomy is a safer and cheaper procedure that causes fewer complications and issues than tubal ligation in women.

Vasectomy is expensive. However, it is a one-time cost and is often covered under health insurance. The cost of other methods, such as condoms, spermicide and birth control pills, can be greater over time.

Once you ha a vasectomy, your semen will not have any more sperm inside it so there would be no reason to use other birth control methods

A vasectomy does not protect you from sexually transmitted infections (STIs) as well as human immunodeficiency virus (HIV). Condoms are the most efficient method of preventing STIs. You should use a condom every time you have sex to protect yourself and your partner from STI.

If you want a vasectomy, you should be sure you never will want to father a child.

A vasectomy is usually recommended for men who are considering to bank their sperm, in cases they decide later to have children. You should discuss options with your partner and health professional. 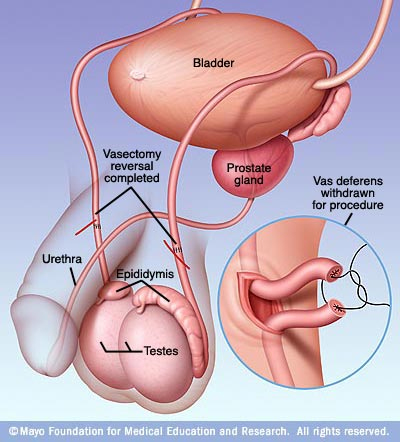 Surgery to reversal a vasectomy is available, but a reversal procedure can be complicated. Sometimes a doctor may remove sperm from the testicle in men who have had a vasectomy or a reveal that did not work. The sperm can be utilized in vitro fertilization. Both sperm retrieval and a vasectomy can be expensive, and it may not be covered by insurance or not always work.

Research indicates that having a vasectomy may increase your risk of prostate cancer and have had mixed results.

Some doctors or medical insurance plans may require you to wait for a period from the request of the procedure. This will give you time to think about your choice.

Research has been done with reversible vasectomy; which involves plugging the different and then eliminating the plug when birth control is no longer desired. Standard methods include pills or injection that the man would use to prevent sperm production.