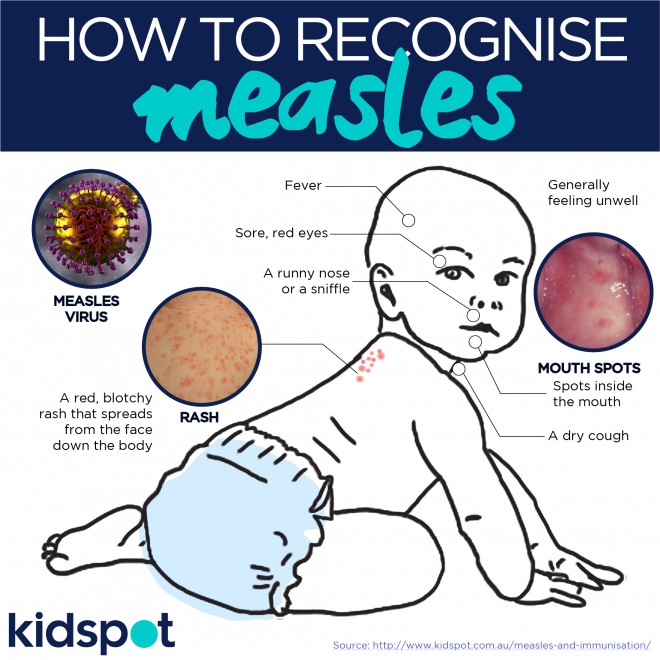 The Measles is an infection that occurs during the childhood caused by a virus. Measles was once a common disease. Today this disease can almost always be prevented with vaccines. There are several symptoms that with the measles including a sore throat, fever, cough, runny nose and inflammation around the eyes, and red spotty skin rashes.

The Measles is also known as rubeola; The measles can be dangerous a sometimes fatal for small children. Although death rates have fallen worldwide, due to more children receiving the measles vaccine, It still kills more than 100,000 people a year mostly children under the age of 5.
The high vaccination rates within the U.S has prevented a widespread outbreak in over a decade. Currently, there are around 60 cases of the measles reported in the U.S, however, most of the originality outside of the U.S

Several signs appear within 10 to 14 days after exposure to he virus. These include:

The infection occurs in different stages over the period of two to three weeks.

Infection and incubation – During the first 10 -14 days after you are infected, the measles virus is incubated. You will have no signs or symptoms.
Signs and Symptoms phase. A mild or moderate fever is typically the first sign, which tends to be followed by constant coughing, sore throat, a runny nose, and conjunctivitis. These symptoms will last two to three days.
Rash – A rash, with small, red, bumpy spots, in tight areas around the skin makes, will look splotchy, the face will get these rashes first also around the hairline and behind the ears. The rash then spreads down the arms and truck and covers the thighs, legs, and feet, during this time the fever will rise sharply as high as 104 to 105.8 F (40 to 41 C). When the rashes begin to leave, they will fade in the same order, from the face first to the feet last. 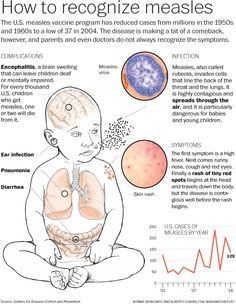 Contagious Period- The measles can spread to others for about eight days, starting four days before the rash appears and four days after the rash is present.

If you or your child have these symptoms, it is important to contact your doctor right away. You should also review your immunization records with your health professional.

What have caused Measles?

The measles is a virus that is replicated within the nose and throat of someone infected. When someone with measles coughs, sneeze or talks, infected droplets go into the air, where other people inhale them. These droplets can land on surfaces and remain infected for hours and as people come in contact with the virus, then touching their face, placing fingers in their mouths,rubbing their eyes they become infected.

What are the risk for the Measles?

Not being vaccinated – If you have not received vaccination fro the disease, you are much more likely to develop measles.

International Travel – Traveling to developing countries, where the measle is more prevalent, you will be at a higher risk.

Vitamin A deficiency – If you do not have vitamin A in your diet, you are more likely to contract the diseases and have more severe symptoms.

Complications With The Measles

Ear infections are one of the most common complications, due to measles causing bacterial growth within the ear.

Bronchitis, Croup or Laryngitis – This is inflammation fo the voice box( the larynx) or inflammation of the bronchial tubes, which are the inner walls that line the passageway to the lungs.

Pneumonia – is a common complication with measles, due to compromised immune systems, people can develop a severe variety of pneumonia, which can be fatal

is the inflammation fo the brain that can cause vomiting, convulsions. In rare cases, this can lead to a coma or even death. Encephalitis can follow the measles or occur several months later.

Having the measles during pregnancy, can cause loss of pregnancy, low birth weight, and preterm labor.

Measles can also low platelet counts (thrombocytopenia) – which leads to low blood platelets – which are critical for the blood to be able to clot.

The doctor can usually diagnose measles based on the characteristics of the rash or Koplik’s spot inside the lining of the check. A blood test can also be taken to confirm.

No treatment can get rid of established measles infection. However, there are ways to protect vulnerable individuals who can be exposed to a virus.

Post -exposure vaccination – immunized people including infants may be given a measles vaccination within 72 hours of being exposed to the measles virus to guard against the disease. If measles develops, the illness is usually milder symptoms and last for a shorter time.
Immune serum globulin. Pregnant women, small children and individuals with reduced immune systems who are exhibited to the virus may receive an injection of proteins (antibodies) known as immune serum globulin. When delivered within six days of exposure to the virus, these antibodies prevent measles or make symptoms less severe.

Fever reducers. You or your child may also take over-the-counter medications such as acetaminophen (Tylenol, others), ibuprofen (Advil, Motrin, others) or naproxen (Aleve) to help relieve the fever that accompanies measles.

Use discretion when providing an aspirin to children or teenagers. Although aspirin is permitted for use in children older than age 3, children and adolescents healing from chickenpox or flu-like symptoms should never use aspirin. This is due to aspirin has been linked to Reye’s syndrome, a rare but possibly life-threatening condition, in such children.

Antibiotics. If bacteria infections, such as pneumonia or an ear infection, grows during the time you or your child has measles, your doctor may designate an antibiotic.
Vitamin A for people who with deficient immune systems are more likely to develop the most serious case of measles. Giving vitamin A may decrease the severity of the measles. It is regularly given as a large dose of 200,000 international units (IU) for two days.