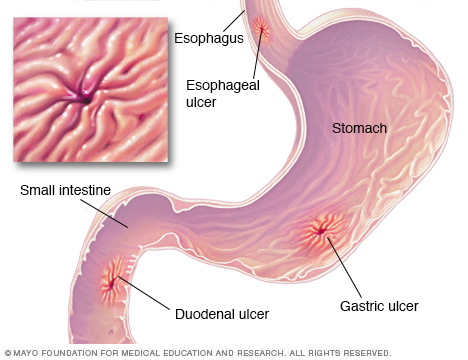 Peptic Ulcer disease refers to painful sores or ulcers that are on the lining of the stomach or duodenum, the first section of the small intestine.

There is no single known cause for the developing ulcers. However, it is clear that an ulcer develops as the result of an imbalance between the duodenum, which is the first part of the small intestine, immediately next to the stomach. Digestive fluids in the stomach. However, most ulcers are caused by an infection from Helicobacter pylori (H. pylori) bacteria.

There are factors that increase the risk of ulcers:
The use of painkillers, known as nonsteroidal anti-inflammatory drugs (NSAIDS) including naproxen( Anaprox Aleve, Naprosyn) aspirin and Ibuprofen(Advil, Motrin, and Midol). There are several other that are available through prescription. Safety coated aspirin, and powdered form aspirin commonly are a reason for ulcers.
Zollinger -Ellison syndrome Gastronomic, tumors from the cells that produce stomach acids increases output.
Excessive alcohol consumption
Smoking and chewing tobacco
Radiation Treatment
Serious Illness of some type.

Are there any Symptoms for A Peptic Ulcer?

In some cases, a peptic ulcer may not have any symptoms. However if symptoms occur they may include the following:

In Severe cases the symptoms can be: 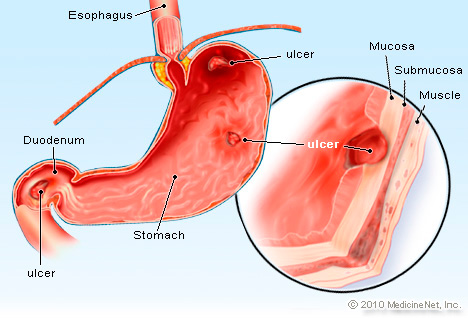 How Serious are Ulcers

Often ulcers will heal on their own without treatment, But it is best not disregard warning signs. If an ulcer is not adequately treated, it can lead to more serious health problems such as:

Bleeding
Gastric outlet obstruction from swelling. Scarring that blocks access from the stomach to small intestine
Perforation ( tear or hole in the wall of the stomach
Taking NSAID can lead to ulcers without warning, especially elderly individuals and those with a history of having peptic ulcers.

Who are at higher risk to get Ulcers?

How do doctors diagnose Ulcers?

Your doctor may be able to determine fi you have an ulcer just by asking you questions about you symptoms. In order for a doctor to confirm the diagnosis, there may be several test that need to be done. The first thing your doctor may ask is acid blocking medication such as heartburn for short time frame until symptoms improve.

Your doctor may recommend that you undergo an upper endoscopy, involving inserting a small lighted tube called an endoscope, through the throat into the stomach for abnormalities. This procedure is usually done if you have severe recurring symptoms. However, it is possible for a doctor to begin treatment with coming with an endoscopy.

How To Treat Ulcers

If ulcers are not adequately treated, it can lead to serious health problems. There are different ways to treat her ulcers, by making changes in your lifestyle, taking medication and undergoing surgery.

The lifestyle changes that can be done include stopping smoking and drinking alcohol. If you are taking NSAID, it is best that you stop taking those as well.

Antibiotics for H. pylori infection, some antibiotics help remove the infection. The multiple combinations of antibiotics that take one or two weeks with PPI, Bismuth is as part of some treatment regimens.
Upper endoscopy – helps repair building ulcers.
Surgery sometimes is needed to repair cellular damage, if there is bleeding that can be controlled with an endoscope.

How to Prevent Ulcers

Do not smoke
Avoid drinking Alcohol
Don’t use aspirin or NSAIDS
You should contact health care provider if you are experiencing any of the symptoms.