Anatomy of the Endocrine System 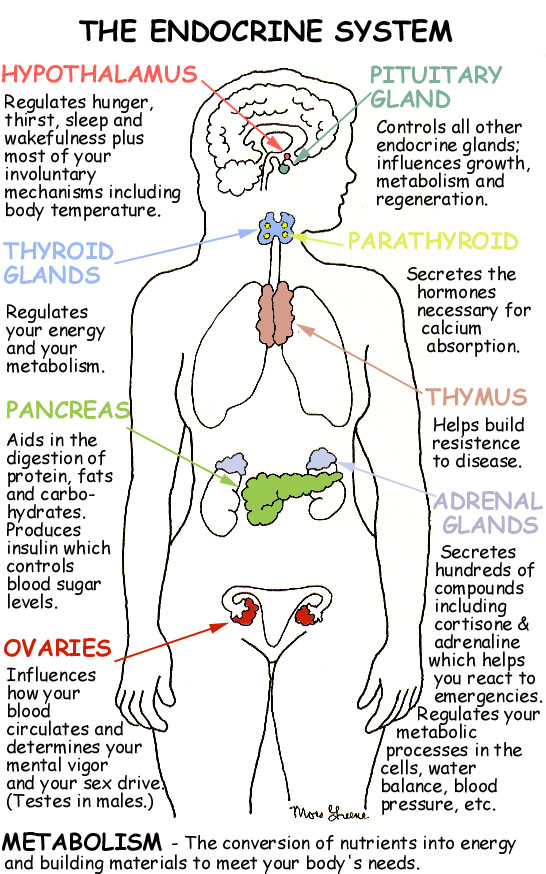 The Hormone properties
After hormones are created by the glands, then they are distributed by the bloodstream throughout the body. These hormones pass through cells, and through the plasma members of cells until they find the encounter a receptor for a particular hormone. Hormones only target cells that have the appropriate receptors. This [pe[rty is lnown for it’s speciricity. Hormone specificity explains how each hormone can have specific effects in many different parts of the body.

There are many hormones created in the endocrine system are classified as tropic hormones. Tropic hormones can trigger the release of another hormone in another gland. The tropic hormones provide a way for glands to be controlled in disappeared parts of the body. Many of the body’s hormones such as TSH, ACTH and FSH are produced by the pituitary gland

There are several factors that regulate the hormone levels The hypothalamus, releasing and inhibiting hormones allow the nervous system controls the hormone levels. The TRH developed in the hypothalamus stimulates the anterior pituitary to produces TSH. Tropic hormones stimulate the thyroid gland to produce T3 and T4. Nutrition can control the levels of hormones inside the body. An example of this is thyroid hormones T3 and T4 require 3 and four iodine atoms, to be produced. For people who do not have enough iodine in their diet, fail to create a sufficient level of thyroid hormones to maintain a healthy metabolic rate. Cells exposed to high levels of hormones for long periods of time can begin to reduce the number of receptors. This process initiates hormonal control of the cell.

The Hormone Classes
There are two classifications of hormones, depending on their chemical composition and Solubility: water-soluble and lipid-soluble hormones, both of these hormones have a particular mechanism in their functionality to detect at how they alter their target cells.

Water-Soluble hormones: Water- soluble hormones have peptide and amino acid hormones, such as epinephrine, HGH insulin, and oxytocin. These hormones are soluble in water, thus unable to pass through phospholipid bilayer of the plasma membranes. These hormones are dependent on a receptor molecule on the surface of the cell. This receptor molecule will trigger a reaction inside the cell, which changes factors such as the permeability of the membrane or activating another molecule. One of this reaction is to cause a molecule of cyclic adenosine monophosphate (cAMP) to synthesize from adenosine triphosphate (ATP) contained in the cell. cAMP functions as a second message delivery system within the cell, binding to a second receptor to change the function of the cells physiology.

Lipid-soluble hormones: Lipid-soluble hormones have steroid hormones such as glucocorticoids, testosterone, estrogen, and mineralocorticoids. Due to being soluble in lipids, these hormones pass directly through the phospholipid bilayer of the plasma membrane and can bind directly with receptors in the cell nucleus. Lipid soluble hormones can directly control the fuckton of these receptors, triggering the transcription of particular genes in the DAN to pruce RNAs or mRNAs, called messenger genes, used to make proteins that affect cell growth and function.