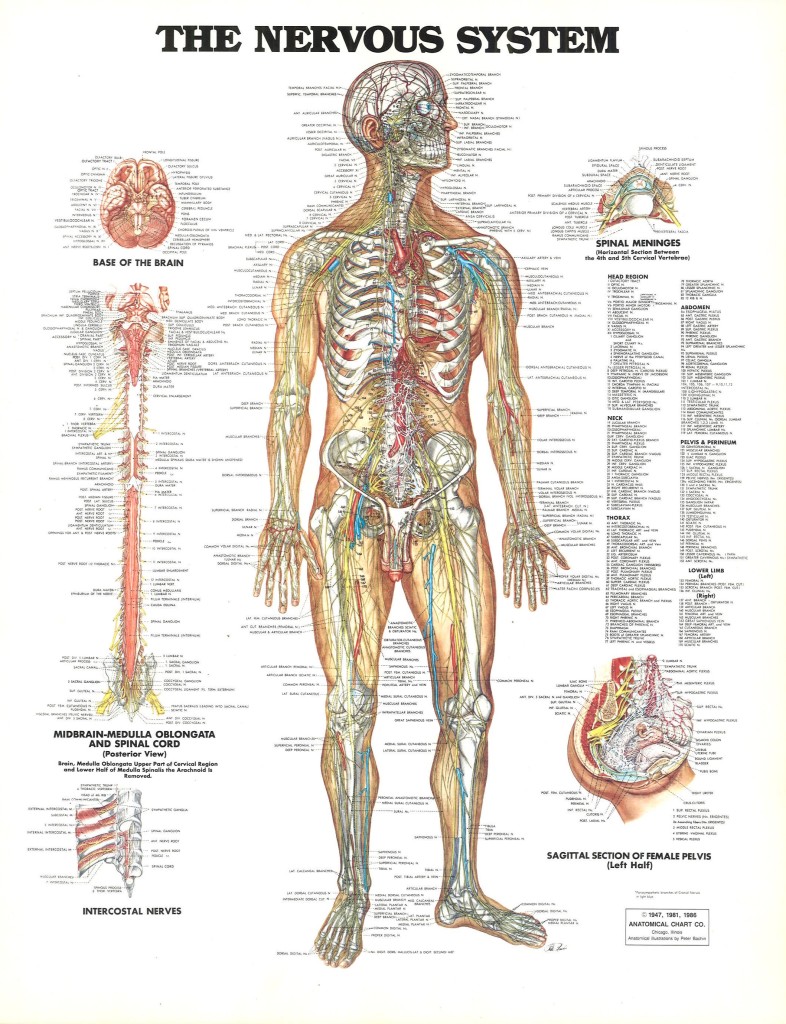 There are many parts of the body’s nervous system, consisting of the brain, sensory glands, spinal cord and all the nerves that connect these organs to the rest of the body. Together, these organs manage and control the body nervous system and the communication with each other. The brain and the spinal cord hold the most control, as it is the command center for the central nervous system (CNS). The central nervous system is where decisions occur, and the information is assembled and evaluated. The sensory nerves and sensory organs work with the peripheral nervous system (PNS), which monitors the environment and conditions inside and outside the body and sends information the CNS. Efferent or Motors nerves in the PNS relays signals from the CNS to the various muscles, organs and glands to regulate their functions.

The Anatomy of the Nervous System
The larger part of the nervous system is tissue that falls into two classes or cells: called neurons and neuroglia.

Neurons also referred to as nerve cells; communicate via transmitting electrochemical signals throughout the body. Neurons appearance is very different from other cells within the body, as it has long cellular processes that extend from its central cell body. The cell body is round portion of a neuron, and it contains the nucleus, the majority of cellular organelles and mitochondria. Dendrites, which look like small tree-like structures, extend from the cell body to gather up stimuli from the environment, sensory receptors or other neurons. Axon, long transmitting processes, extend from the cell body as well, sending a signal on to different neurons or effector cells in the body.
There three fundamental classes of neurons, efferent neurons, afferent neurons, and interneurons.

Neuroglia called glial cells, is an assistant cell within the nervous system. 6 to 60 neuroglia surround each neuron in the body to protect, feed and insulate the neuron. Neurons almost never reproduce, and since they are extreme;u specialized cells, that at are essential to the body, Neuroglia is critical to maintaining a working nervous system.

Brain
The brain is a soft, gray, crinkled organ that weighs near 3 pounds, located within the cranial cavity. The skull surrounds and protects the brain. The brain holds about the approximately 100 billion neurons, which creates for the main control center of the body. The brain along with the spinal cord together form the central nervous system (CNS). Within the CNS information is processed, and responses begin. Higher mental functions such as memory, consciousness, planning, voluntary actions as well as lower body functions, that keeps the body operating, such as respiration maintenance, blood pressure, heart rate, and digestion.

Spinal Cord
The spinal cord is a long thin portion of nerve cells, bundle together that carries information through the body via the vertebral cavity of the spine to the start of the medulla oblongata of the brain on the superior end and continuing inferiorly to the lumbar section of the spine. The Lumbar section. Spinal cord divides into a bundle of individual nerves called cauda equina ( as it resembles a horse tail). The Cauda equina continues inferior to the sacrum and coccyx. The substantia alba of the neural structure functions because the main passage of nerve signals to the body from the brain. The gray matter of the neural structure integrates reflexes to stimuli. 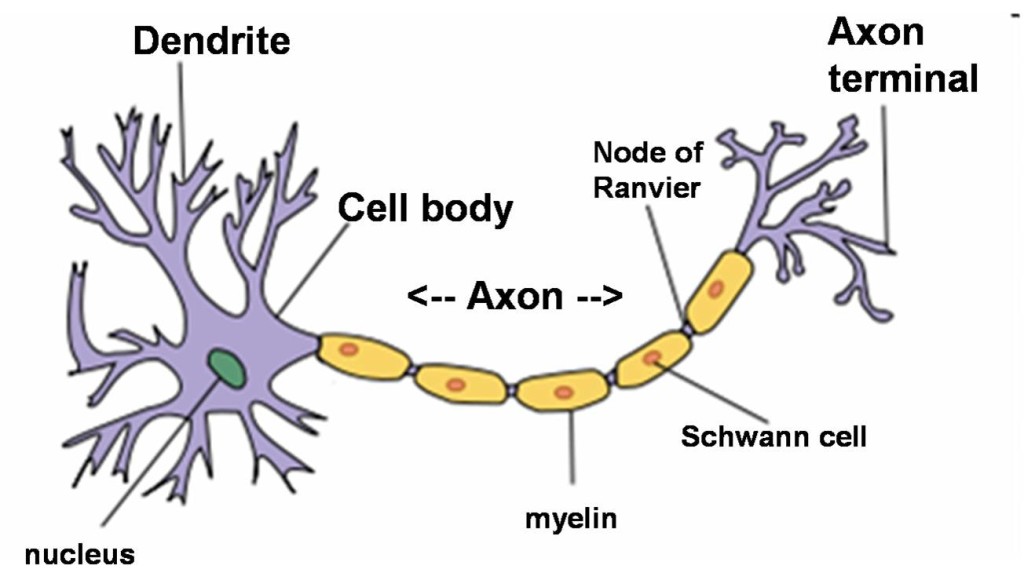 Cranial Nerves. Stretching from the lower side of the brain are 12 pairs of cranial nerves. Each cranial nerve pair is recognized by a Roman numeral 1 to 12 based upon its position on the anterior-posterior axis of the brain. Each nerve likewise has a representative name (e.g. olfactory, optic, etc.) that classifies its purpose or position. The cranial nerves provide a direct contact to the brain for the special sense organs, muscles of the neck, head, and heart, the shoulders, and the GI tract.

Dura mater. The dura mater, which means “tough mother,” is the toughest, thickest and the most exterior layer of meninges. Consisting of dense irregular connective tissue, it holds many blood vessels and strong collagen fibers. Dura mater protects the CNS from external damage, holds the cerebrospinal fluid that encloses the CNS, and gives blood to the nervous tissue of the CNS.

Arachnoid mater. Which means “spider-like mother,” is much thinner and more sensitive than the dura mater. It pads the inside of the dura mater and contains numerous thin fibers that connect it to the underlying pia mater. These fibers cross a fluid-filled space called the subarachnoid space between the arachnoid mater and the pia mater.

Pia mater. The pia mater means “tender mother,” is a slim and sensitive layer of tissue that sits upon the outside of the brain and spinal cord. It contains numerous blood vessels that support the nervous tissue of the CNS, the pia mater inserts into the channels of the sulci and fissures of the brain as it comprises the entire exterior of the CNS.

Cerebrospinal Fluid
The area encompassing the organs of the CNS is filled with a clear fluid distinguished as cerebrospinal fluid (CSF). CSF is developed from blood plasma by special formations called choroid plexuses. The choroid plexuses hold many capillaries filled with epithelial tissue that filters blood plasma and enables the filtered fluid to enter the area surrounding the brain.

Recently created CSF passes through the inside of the brain in unfilled places called ventricles and through a tiny cavity in the middle of the spinal cord called the central canal. CSF also circulates through the subarachnoid space throughout the outside of the brain and spinal cord. CSF is continually produced at the choroid plexuses and is reabsorbed into the bloodstream at structures named arachnoid villi.

CSF absorbs shocks between the brain and skull and between the spinal cord and vertebrae. This shock absorption guards the CNS against knocks or sudden changes in velocity, such as during an automobile collision.

The brain and spinal cord rest within the CSF, reducing their actual weight through buoyancy. The brain is a rather large but delicate organ that needs a high volume of blood to function efficiently. The decreased weight in cerebrospinal fluid allows the blood vessels of the brain to remain accessible and helps shield the nervous tissue from becoming damaged under its own weight.

CSF helps to control biochemical homeostasis within the central nervous system. It contains oxygen, nutrients, ions and albumins that support the osmotic and chemical balance of nervous tissue. CSF also eliminates waste products that accumulate as byproducts of cellular metabolism within nervous tissue.

Sensory Organs
All of the body’s sensory organs are parts of the nervous system. These abilities are called special senses—smell, taste, hearing, vision and balance—are all identified by specialized organs such as the olfactory epithelium, eyes, and taste buds. Sensory receptors for the general senses like touch, temperature, and pain are found everywhere most of the body. Every sensory receptor of the body is joined to afferent neurons that send their sensory information to the CNS to be integrated.