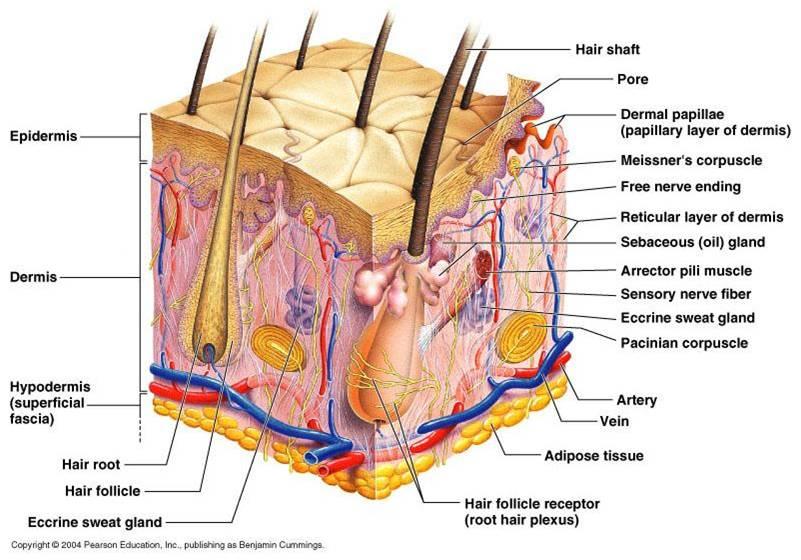 The integumentary system is a system of organs that includes the skin, hair, nails and exocrine glands. Although the human body skin is only a few millimeters thick, it is the largest organ on the body. Many people often don’t think of the skin as an organ. For the average person, the body’s skin weighs 10 pounds, as the surface it covers is nearly 20 square feet. The skin is the outer body covering that forms a barrier and protects the body from numinous elements, including chemical, UV light, disease and physical damage. The body’s hair and nails are an extension of the skin. It reinforces the skin, by added addition protection from the environment. The exocrine glands produce fluids and chemicals as well as sweat, oil and wax cool, moisture and protect the skin.

There are several specialized cell types within the epidermis. Nearly 90% of the epidermis is made of keratinocytes. Keratinocytes are developed from stem cells that exist at the epidermis, which the protein keratin. Keratin makes keratinocytes scaly, water resistant and rough. Melanocytes are 8% or epidermal cells. Melanocytes account the second
Melanocytes create the skin’s pigment melanin, which protects it from ultraviolet radiation and sunburn. The third most common cells are Langerhans, inside the epidermis and make more than 1% of all epidermal cells. Langerhans cells find and fight off pathogens that try to enter the body. Another cell is Merkel cells that are less than 1% of all epidermal cell; these are the cells that sense touch. Merkel cells create a disk along the deepest edge of the epidermis that connect with the dermis nerve endings to sense touch. 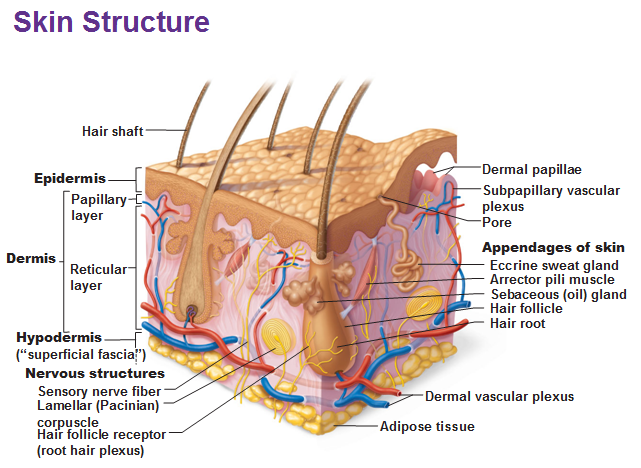 The Dermis is the deep layer of skin that is underneath the epidermis. The dermis consists mostly of dense irregular connected tissues that intertwine with nervous tissues blood vessels and blood. The thicker dermis layer provides strength and elasticity, much more than the epidermis. The dermis has two different area, on is the reticular layer and the other is the papillary.
The reticular layer is the deeper, tougher, thicker layer of the dermis. The reticular layer consists of a dense irregular connecting tissues that are made of many tough collagen and elastic fibers running in every direction to provide strength and flexibility to the skin. The reticular layer also holds blood cells that support the skin cells and nervous tissue to since pressure and pain an
The papillary layer is the top layer of the dermis that borders the epidermis. Within the papillary layer, there are finger-like extensions, which called dermal papillary, bulging superficially toward the epidermis. The dermal papillae grow the exterior region of the dermis and contain a large variety of nerves and blood vessels that are propelled toward the surface of the skin. Oxygen and nutrients are provided by blood flowing through the dermal papillae to the cells within the epidermis. The papillae hold nerves that are used to feel temperature, pain and touch through its cells
The hypodermis layer is located deep inside the dermis layer, which consist of loose connective subcutis or subcutaneous tissue. The hypodermis is the flexible layer that connects the skin the muscles, fat storage and bones, underneath. The Areolar connective tissue located with the hypodermis holds elastin and collagen fibers that are freely arranged to allow the skin to mover individually of its underlying structures. Energy is stored in the form of triglycerides through fatty adipose with the hypodermis. The adipose traps body heat produced by underlying muscles helps to insulate the body.

Hair is an accessory organ of the skin, which is made of columns and rows of tightly filled dead keratinocytes located in most areas of the body. The few parts of the body that are hairless include the surface of the hands (palmar) and feet, lips labia minora and glans penis nine which are planter regions. Hair helps the body protect the skin from UV radiation by blocking sunlight hitting it in the surface. Hair also protects the body by trapping warm air around the skin.

The structure of the hair consists of three different major parts: the follicle, root, and shaft. The hair follicle is placed inside of epidermal cells deep into the dermis. Stem cells in the follicle reproduce to form the keratinocytes that will form the hair, as the melanocytes make the pigment that gives the hair it is color. Inside the follicle, the hair root is the portion of the hair below in the skin’s surface. The cells, in which the root pushes up the surface until they exit the skin, produce the new hair. The hair shaft is what is grown outside of the skin.

There are three different layers that make up the hair shaft and root, these include, the cuticle, cortex, and medulla. The cuticle is the outmost layer that’s made of keratinocytes. The keratinocytes of the cuticle are layered on top of each other like silts so that the outermost tip of each cell points away from the body. Under the cuticle, the cortex cells form most of the hair’s width. The spindle-shaped and tightly packed cortex cells hold pigments that determine the color of the hair. The innermost layer of the hair is called the medulla, which is not in all hairs. The medulla usually has highly pigmented cells that are full of keratin. When there is no medulla, the cortex continues though the middle of the hair.
Nails
Nails are accessory organs for the skin, which is made of sheets of hardened keratinocytes. The keratinocytes are on the distal ends of the finger and toes. The fingernails and toenails protect and reinforce the end of the digest that used to scrape in manipulate small objects. There are three parts of the nail: root, body and free edge.
The nail root is found under the surface of the skin. The nail body is the external portion that visible. The free edge is the distal end part of the nail that grows beyond the finger or toe. Nails grow from the nail matrix, which is a deep layer of the epidermal tissue. The nail matrix surrounds the nail root. The stems cells, within the nail, reproduce to create keratinocytes. Keratinocytes make keratin proteins, which are packed into hard sheets of toughened cells. The sheets of keratinocytes create the nail root that grows very slowly from the skin to the skins surfaces, forming the nail body. The cells in the nail root and body grow and is slowly pushed towards the distal end of the finger and toe by new cells being created in the nail matrix.

Underneath the nail, a body is the nail bed, which is made of a layer of epidermis and dermis.The nail is pink due to the capillaries that provide blood to the cells in the nail body. Near the nail root, the proximal end of the nail forms a whitish curved shape, called the lunula, where a little part of the nail matrix is visible through the nail’s body.

Sebaceous organs are exocrine organs found in the skin’s dermis that create a sleek emission known as sebum. Sebaceous organs are found in all aspects of the skin with the exception of the tough skin of the hands’ palms and soles of the feet. Sebum is created in the sebaceous organs and helped through pipes to the skin’s surface or hair follicles. Sebum acts to waterproof and builds the skin’s flexibility. Sebum additionally greases up and ensures the fingernail skin of hairs as they go through the follicles to the body’s outside.

Sebaceous organs are exocrine organs found in the skin’s dermis that create a sleek emission known as sebum. Sebaceous organs are found in all aspects of the skin with the exception of the tough skin of the hands’ palms and soles of the feet. Sebum is created in the sebaceous organs and helped through pipes to the skin’s surface or hair follicles. Sebum acts to waterproof and builds the skin’s flexibility. Sebum additionally greases up and ensures the fingernail skin of hairs as they go through the follicles to the body’s outside.