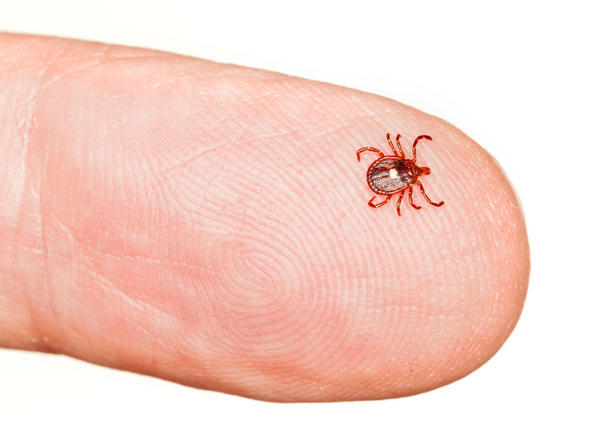 You are at higher risk to get Lyme disease if you live or spend time n in a heavily wooded or grassy area, where ticks carrying the disease are present. It is imperative to use common-sense precautions in areas where ticks are widespread.

Symptoms of Lyme disease are various and normally appears in stages

Early Symptoms:
A small red bump will commonly appear at the site of the tick bite or where the tick was removed. Red bumps are normal after a tick bite and does not indicate line disease, by itself.

However, if there are signs that appear within a month of the bite, it may indicate that you have been infected with Lyme disease.

Rash: From 3to 30 days after an infected tick bite, there will be an expanding red area that may appear that sometimes clears in the center. Forming a bull eyes pattern. The rash or erythema migrans) will expand slowly over the next several days to 12 inches (30 centimeters ) across the skin. This rash is typically not painful or itchy.

Erythema migrans is one of the main signs of Lyme disease. Some people develop multiple rashes on different parts of their bodies. 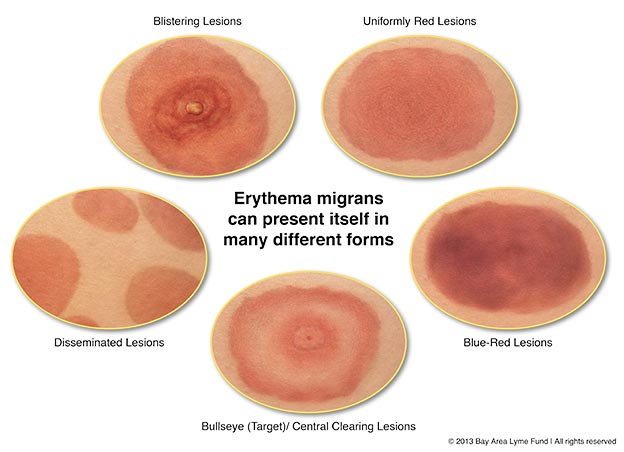 If left untreated, new signs of the infection may appear in the following weeks or months: These include:

Erythema migrans appearing on other parts of the body.
Joint pain – episodes of severe joint pain and swelling are common, mainly affecting your knees, pain can also shift one joint to the other.
Neurological problems. Weeks months or perhaps years after infection, you might from inflammation of the membranes, circling your brain (meningitis), brief paralysis of one side of the face ( Bell’s palsy ), numbness or weakness in your limbs, and diminished muscle movement.

Signs and symptoms caused by the bacterium Borrelia mayonii may also include the following:

Dispersed rashes, (rather than a single “bull’s-eye rash” related with Lyme disease)
Nausea and vomiting 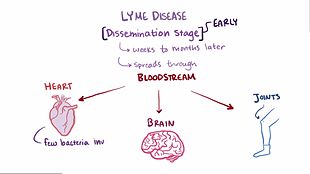 If wearing and have symptoms

Only a small percentage of black-legged tick bites lead to Lyme disease. The longer the tick remains attached to your skin, the greater risk you have of getting the disease. Lyme infection is not likely if the tick is attached for less than 36 to 48 hours.

If you thin you have been bitten by a tick, and you have signs and symptoms – especially if you were in a location where Lyme disease is prevalent – contact your doctor. Treatment for Lyme disease is efficient if you begin it early.

Even if your signs and symptoms disappear, you still should consult your doctor, absence of the symptoms doe not indicate that the disease is gone. Failure to treat Lyme disease can result in the infection spreading to other parts of the body from months and year after the infection, leading to nervous system problems and arthritis. Ticks can also transmit other ailments such as Colorado tick fever and babesiosis. 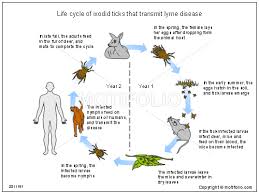 Causes In the United Sates, Lyme disease, is caused by Borrelia bmayonii and Borrelia burgdorferi, which is carried by black-legged or deer ticks. Ticks are brown and when young they can be no large than poppy seeds. This can make them nearly impossible to spot.

Where you live or go on vacation can affect your risk of getting Lyme disease. If your profession requires you to be outdoors, in grassy or wooded areas, there may increase risk/

The most common risk factors are:

Spending time in wooded or grassy areas. In the U.S deer ticks are the most common in the Midwest and Northwest regions, which have heavily wooded areas, where deer ticks are widespread. Children, who spend much time outdoors in these areas are particular at risk. Adults with outdoor occupations may have increased risk.

In the first two stages of deer ticks lives, they feed on mice and other rodents, which are the primary method of contracting Lyme disease bacteria, and adult ticks feed primarily on whit-tailed deer.

Exposed skin – Ticks easily attach to the bare skin. If you are in an area where ticks area, protect yourself and your children by earing long pants or long sleeves, Don’t allow your pets to wander in tall weeds and grasses.

Not removing ticks promptly or correctly. Bacteria from a tick can enter the bloodstream. Remove ticks fast, once 36 to 48 hours have passed the tick have increased chances of transmission.

The are various symptoms of Lyme disease are non-specific and can often occur in other types of conditions so that diagnosis can be difficult, Also the ticks that transmit disease can also spread another disease at the same time.

If you do do not have characteristics of Lyme disease rash, your doctor may ask you about your medical history, including fi you have been outdoors in areas where Lyme disease is common and request you do a physical exam.

A lab test to detect antibodies to the bacteria can help confirm the diagnosis. These tests are most reliable a few weeks after an infection after your body has had time to develop antibodies.

Breastfeeding assay (ELISA) test. The test used most often to identify Lyme disease; ELISA detects antibodies to B. burgodrferi. However, false positives results can occur sometimes. This test may not have positive readings during the early stage of Lyme disease, but the rash would be distinctive enough to indicate an infection, without the need for further testing in individuals who live in areas infested with ticks that transmit Lyme disease.

Western blot test. If the ELISA test is positive, this test is done to confirm the diagnosis. In this two-step approach, the Western blot test identifies antibodies to several proteins of B. burgdorferi.

Antibiotics are used to treat Lyme disease. In general, recovery will be quicker if treatment is implemented quickly.

Oral Antibiotics- This is standard recommended treatment for early-stage Lyme disease. These frequently include doxycycline of adults and children older than 8, or amoxicillin or cefuroxime for adults, younger children or women who are pregnant or breastfeeding. Antibiotics are normally recommended for a 14-21 day course. However, some course lasting 10=14 days are equally effected according to some studies.

Intravenous Antibiotics– If the condition involves the central nervous system, your doctor may recommend treatment through intravenous methods for 14 to 28 days. This is an effective way of removing the infection. Intravenous antibiotics can cause several side effects including lower white blood cells count, colonization or infection with other antibiotic-resistant organisms, and mild to severe diarrhea

Following treatment, a small number of people will have a few symptoms, such as muscle aches and fatigue. The cause of these ongoing symptoms, known as post-treatment Lyme disease syndrome, treating with more antibiotics does not help. Some experts assume that certain people who get Lyme disease are predisposed to develop some autoimmune responses that contribute to their symptoms.

Bismacine-
The Food and Drug Administration warns people not to use bismacine which is an injectable compound prescribed by some in alternative medicines. Bismacine, is also known as chromacine, and continues very high levels of the metal bismuth. While bismuth is safely used in some oral drugs for stomach ulcers, it is not approved for use in injectable for or treatment of Lyme disease, as it can cause bismuth poisoning, leading to heart and kidney failure.

Lyme Prevention
The best and simplest way to prevent Lyme disease is to avoid areas where deer ticks are, specifically wooded areas and areas with long grass. This will reduce the risk.

Cover up your arms and legs, and wear shoes, and long pants, tuck your pants into your socks, if possible, Wear hats, and gloves. Try to stick to trails and paths without going through bushes and long grass.

Use insect repellents. Apply repellant to a 20% or higher concentration of Deet to your skin. Parents should apply this to the children, however, avoid eyes, mouth and hands, as chemicals can be toxic. Follow directions carefully.
Tick-proof, your yard by removing brush and leaves where ticks live, Keep woodpiles in the sun.

Check yourself, children and pets for ticks. Be especially thorough after spending time in wooded or grassy areas. Deer ticks can be no large than a pin, so you need to search very carefully. You should shower as soon as you come indoors, Ticks often will remain on the skin for hours before attaching themselves. Showering and using a washcloth might help and remove ticks that are not attached.

You are not immune; you can get Lyme disease more than once.

Remove ticks as soon as you can. Use tweezers, gently grab the tick near the head or mouth, do not squeeze or crush the tick, pull it off carefully and steadily, Once you removed the tick, dispose of it and apply antiseptic to the bite area.