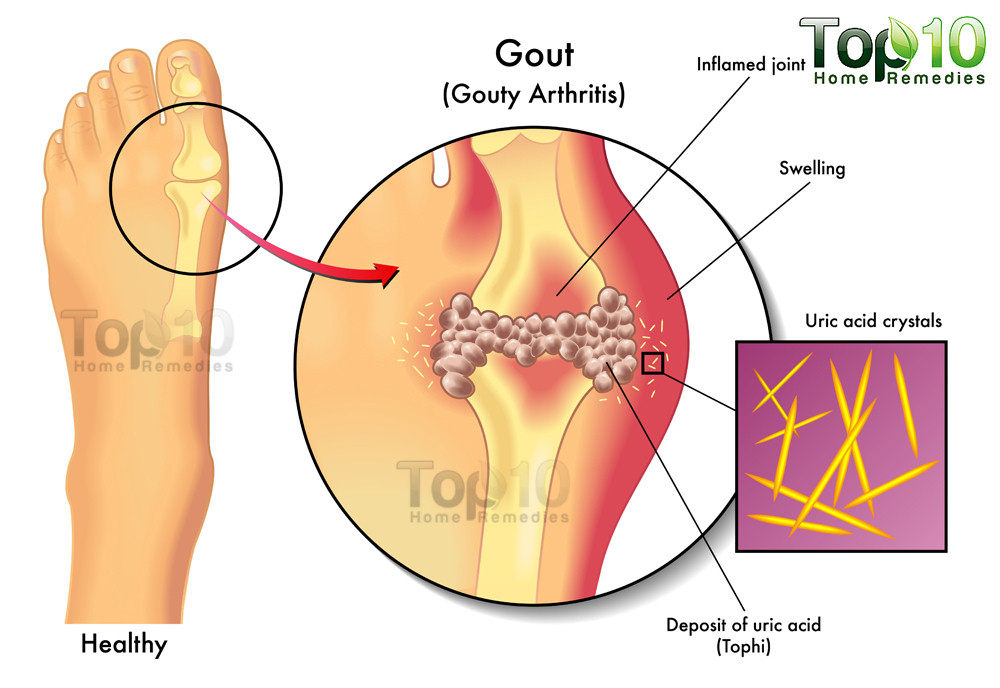 Gout is a common type of arthritis. It can case sudden burning, swelling, stiffness within the joint, usually at the big toe. The exact cause of hyperuricemia sometimes isn’t known, although inherited factors (genes) seem to play a role. These attacks can recur over and over unless gout is treated. Over time, they can harm your tendons, joints, and other tissue. Gout occurs most frequently in men.

Ther is a higher risk of developing if you are overweight, eat too much meat and fish with high purine chemicals, or drink too much. Certain medications such as pills (diuretics) can also bring on gout.

The most common sign of gout is nighttime attacks of swelling, redness, tenderness and sharp pain in your big toe. You can also get gout attacks in your joints, knees, ankle and foot. These attacks can last for a few days or several weeks before the pain goes away. Another gout incident may happen for months or years. 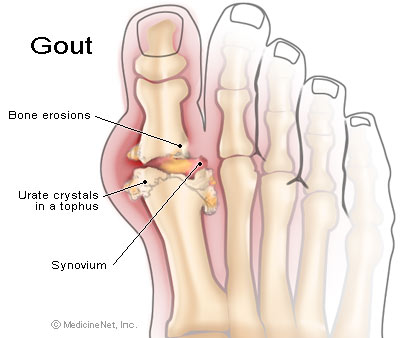 Even after the gout is gone, it is a good idea for you to see your doctor. There can be a buildup fo uric acid that can lead to another gout attack and still affect the joints.

Your doctor may ask you questions about your symptoms and do a physical examination. The doctor may also request a sample fo fluid from the joint to look for uric acid crystals. A fluid sample is the best way to test for gout. Your doctor may also do a blood test to measure uric acid level.
To stop gout, your doctor can give you a shot of corticosteroids or prescribe a large daily dosage of one or more medicine. The doses get smaller as the symptoms go as your symptoms subside. Relief form a gout attack often begins within 24 hours if you start treatment quickly.

To ease the pain during a gout attack, the rest of the joint starts to hurt. Taking a drug such as ibuprofen or another anti-inflammatory medicine can assist in the pain. You should not take aspirin. It can make gout worse by increasing the uric acid level in the blood.

Your doctor can prescribe you medicine to reduce the uric acid build in our blood and prevent future attacks.

Your diet will play a large part managing your gout. Eat moderate amounts of a healthy mix of food to control your weight and get the nutrients you need. Limit daily intake of meat, seafood, alcohol and specifically beer. DIrnk plenty of water and fluids

Often gout may flare up for no apparent reason. However, it can trigger by the following: 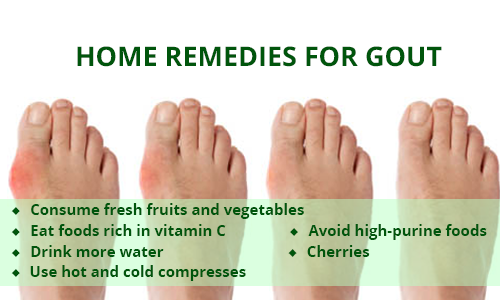 Gout can be related to diet and body weight, Being overweight and having too many high-purine foods and excessive alcohol
Regular usage of medicines that increase the intake of uric acid concentration, such as niacin and aspirin and using medications that reduce the amount of salt and water.
Major illness or certain medical conditions such rapid weight loss and high blood pressure
Surgery
A rare condition that produces high blood uric acid levels. People with Kelly-Seegmiller syndrome or Lesch-Nyhan some have a partial or complete deficiency of the enzyme that helps control uric acid levels.

Warmth pain, swelling and extreme tendersou in the joint – This symptom is called podagra. The pain often begins during the night. It may get worse quickly last for hours and be so intense that light pressure such as a sheet is intolerable.
There can be very red or purplish skin around the affected joint. The joint may appear infected. Peeling and itching of the skin around the impacted joint as gout improved.
Gout may first appear as the nodule (tophi) on the elbows, hands, or ears. You may not have any general sysmptom of a gout attack. 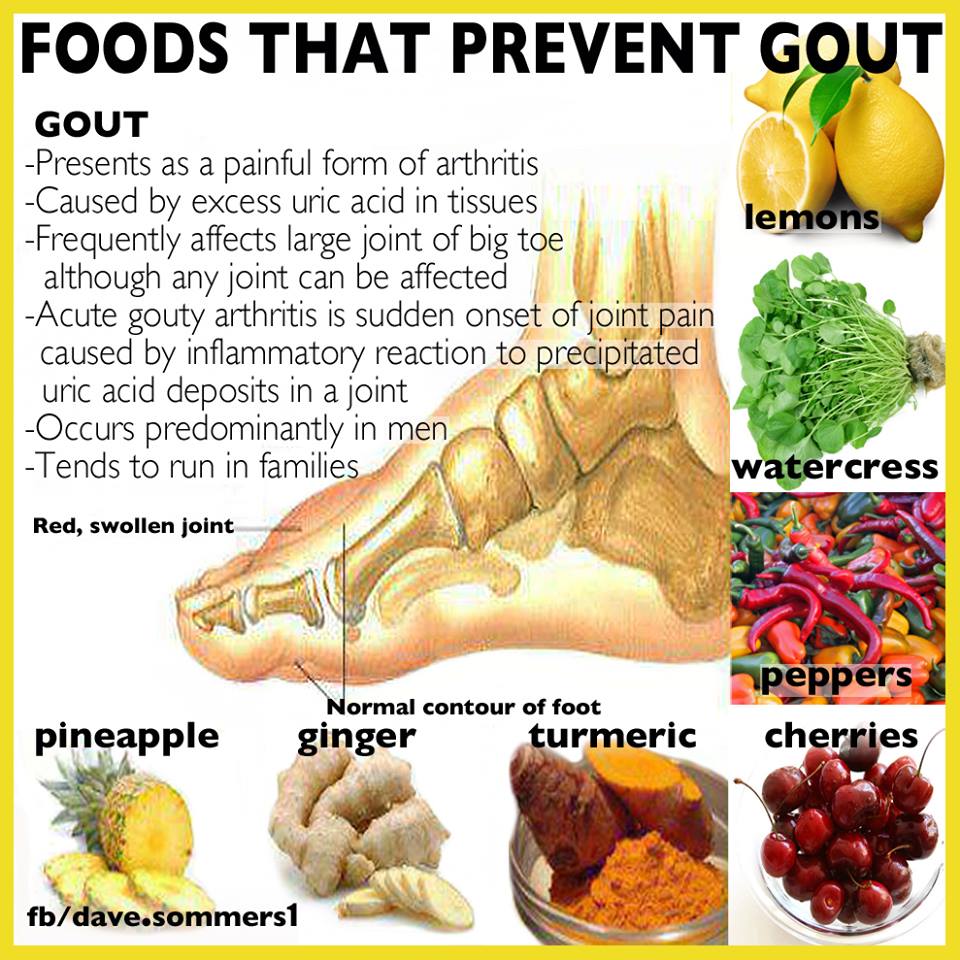 Gout develops after some years of buildup of uric acid crystals in joints and softening tissues. A gout attack typically happens in the night, and the moderate pain grows worst. A gout attack causes pain and swelling in inflammation in a single joint.
Most gout attacks stop after about a week.
Mild attacks may stop after several hours or last of 1 to 2 days.
These attacks are often misdiagnosed as sprain or tendinitis.
Severe attacks may last up to several weeks, and the soreness can last up to a month.
Many people have people second attack of gout within six months to a year after their first attacks. If gout is untreated the frequency of attacks, increase over time.

The first stage of Gout is having a high uric acid levels in your blood, but there no symptoms. The uric levels may the same, and you may never have symptoms. Some people may have kidney stones before having their first attack of gout.
The second -uric acid crystal begins to form, usually in the big toe, You being to have gout attacks. After the attack the affect joint feels normal. The time between attacks may grow shorter. Your later attacks may be more severe, last longer, and involve more than one joint.
The third stage, symptoms may never go away. They may affect more than one joint. Gritty nodes called tophi may be under your skin. Without treatment tophi may form in the cartilage of the external ear of the tissues around the joint ( Bursae, ligaments, and tendons). This can cause pain, swelling warmth and redness. (inflammation)

Long term treatment of gout, which may ongoing (chronic ) affect more than one joint. Take medicines as your doctor prescribes for pain. Take steps to reduce the risk of future attacks.
Talk to your doctor about the proper treatment and medications.
Take long-term medicine.
Uricosuric agents
Drugs Called xanthine oxidase inhibitors

Pegloticase (Krystexxa). This medicine is for gout that has lasted a long time and has not responded to other treatment,