Dystonia is a disease that affects the movement of a person’s muscle, in which the contract uncontrollably. The contraction produces the affected body part to twist involuntarily ending in repetitive movements or abnormal positions. Dystonia can affect one muscle, a muscle group, or the entire body. Dystionia effects about 1% of the population and women are more prone to it than men.

The stress of fatigue may bring on the symptoms or causes them to worsen. People with dystonia often complain of pain and exhaustion because of the constant muscle contractions.

The stress of fatigue may bring on the symptoms or cause them to worsen. People with dystonia often complain of pain and exhaustion because of the constant muscle contractions.

If dystonia symptoms occur in childhood, they may usually occur first in hand or foot. However, then they quickly progress then they quickly progress to the rest of the boy. After adolescence, through, the progression rate tend to slow down.
When dystonia appears in early adulthood, it typically starts in the upper body. Then there is a slow advancement of symptoms. Dystonias that start in early adulthood remain local or segmental. Both affect either one part of the body or tow or more adjacent body parts. 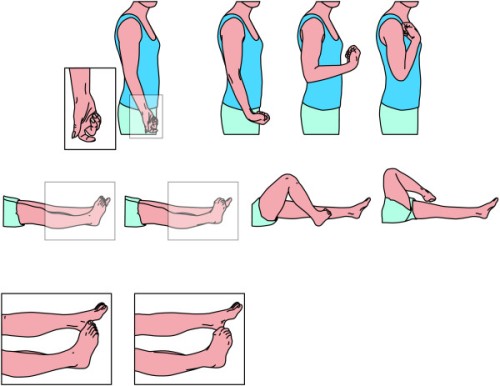 What Causes Dystonia?
Most cases of dystonia do not have a particular cause. Estonia appears to be related to the problem in the basal ganglia. That is the area of the brain that is responsible for initializing muscle contractions. The problem involves the way the nerve cells communicate.
Damage to basal ganglia produces acquired dystonia. The damage could be the result of the following:

Idiopathic or primary dystonia is often inherited form a parent. Some carriers of the disorder may never develop a dystonia themselves. Moreover, the symptoms may vary widely among members of the same family.

Dystonias can also be classified as syndromes based on their patterns.

How is Dystonia treated?
There are various options for treating dystonia. The physician will decide the course of treatment based on the type of dystonia and its severity.

Recently doctors have been treating dystonia with botulinum toxin, also called Botox or Xeomin. The toxin is injected into the muscle that is affected. There is blocks the effect of the chemical acetylcholine that produces muscle contractions. The injection needs to be repeated about every three months.

When dystonia effects someone disabled, deep brain stimulation is an option. With extensive brain stimulation, an electrode is implanted into a particular area in the brain. It is the connected to a battery powered stimulated implanted in the chest. The electrode transmits electrical pulses, but by the similar contractions the irons doctor regulates the feebly and intensity of the electrical pulses
Medications can help reduce the overdrive message that causes muscles to contract excessively in dystonia; Drugs used include:

The sensory trick is another option. With optical trick stimulation applied to the affected or nearby body part may reduce the muscular contratcions> By simply touching this area, people can control their own contractions.
Speech therapy, stress management, physical therapy may also be used to treat the symptom of dystonia.