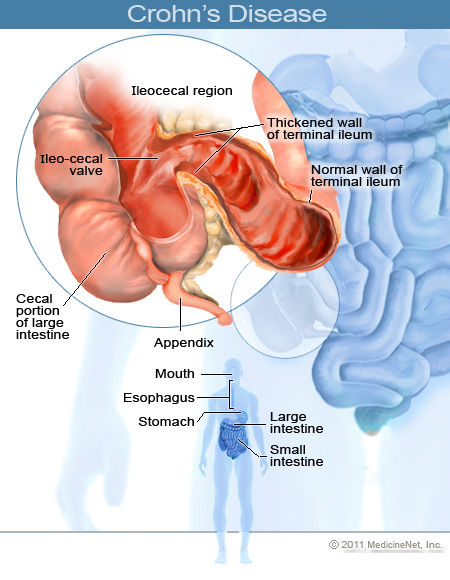 Crohn’s disease is named after Dr. Buriiol B. Crohn, who first identified a disease with Dr. Leon Ginzburg and Dr. Gordon D. Oppenheimer. Crohn diseases to a group of conditions of inflammatory bowel disease (IBD). Crohn’s ideas is a chronic inflammatory condition of the gastrointestinal tract.

Crohns’s disease is different from ulcerative colitis, which is another type of IBD. The symptoms of these two illnesses are similar in some aspects, but the areas affected in the gastronomical tract (GI tract) are different.

Crohn’s disease is most common affecting the end of the same bowel (the ileum) and the first portion of the colon. It can also affect any portion of the gastrointestinal (GI) tract, from the mouth to the anus. Ulcerative colitis is confined to the colon, also called the large intestine. 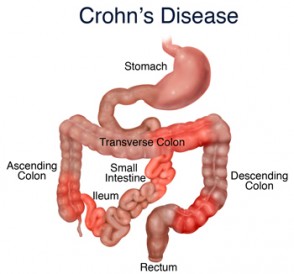 Chris; disease can also have an impact on the entire thickness of the bowel wall while ulcerative colitis exclusively affects the innermost lining of the colon. Finally, in Crohn’s disease, the inflammation of the intestine can “skip” leaving normal areas in between patches of diseased intestine. IN ulcerative colitis this does not court.

Symptoms related to inflammation of the GI tract:

General Symptoms that may be associated with IBD

If you think you are showing any signs of Crohn’s Disease symptoms, only by comprehensive testing can your doctor give you an accurate diagnosis.

People that suffer from Crohns disease will often experience loss of an appetite and may begin to lose weight as a result. You may also low energy and fatigue are also common. Among younger children, Crohn;s may delay growth and development. 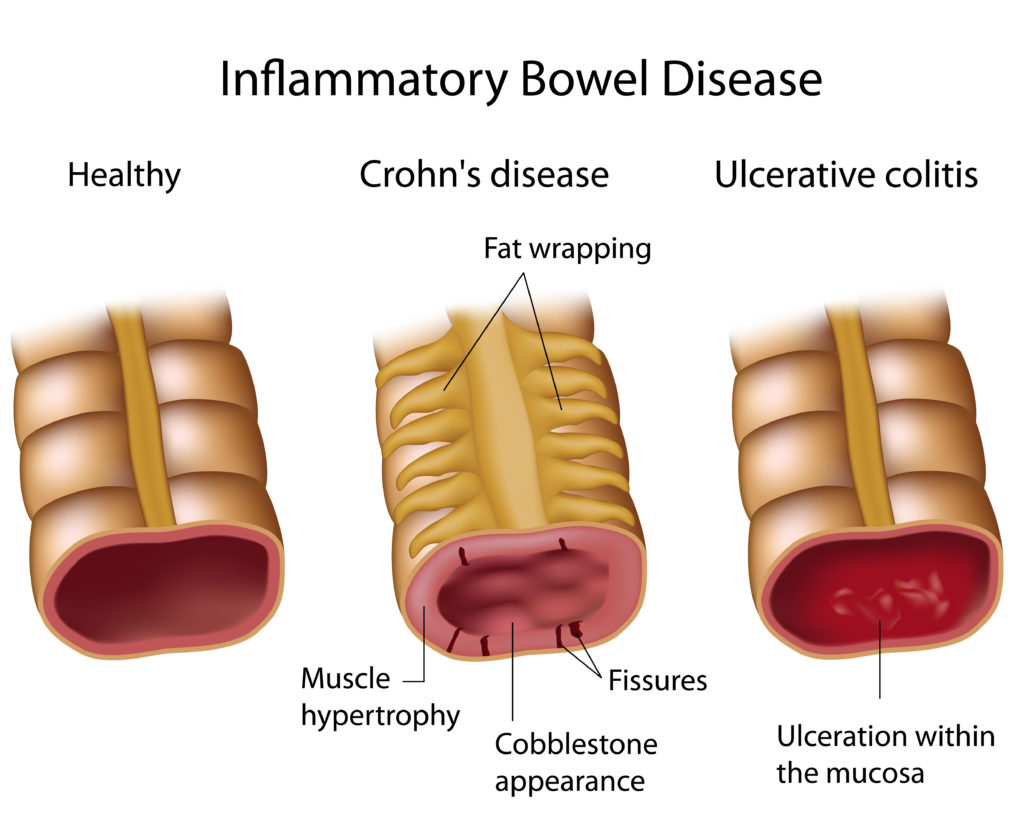 Crohn’s is a chronic die; which means that patients will likely experience periods where the symptoms of the disease will continually flare up proceeding by remains and the patient would no longer notice any symptoms.

In severe cases, Crohn’s can lead to tears or fissures in the lining of the anus, casting pain and bleeding, spiffily when there are bowel movements. Inflammation may also create a fistula to develop. A fistula is a tunnel that leads from on top of the intestines to another, or it connects the intestines to the bladder, vagina or skin. In a serious condition, it requires made medical attention.

The symptoms that you experience may depend on which part of the GI tract is affected.

Crohn’s disease affects as many as 700,000 American. Men and women are equally likely to be affected and while the disease can occur at any age. Crohn’s disease is more common among adolescents and young adults between the age of 15 and 35. 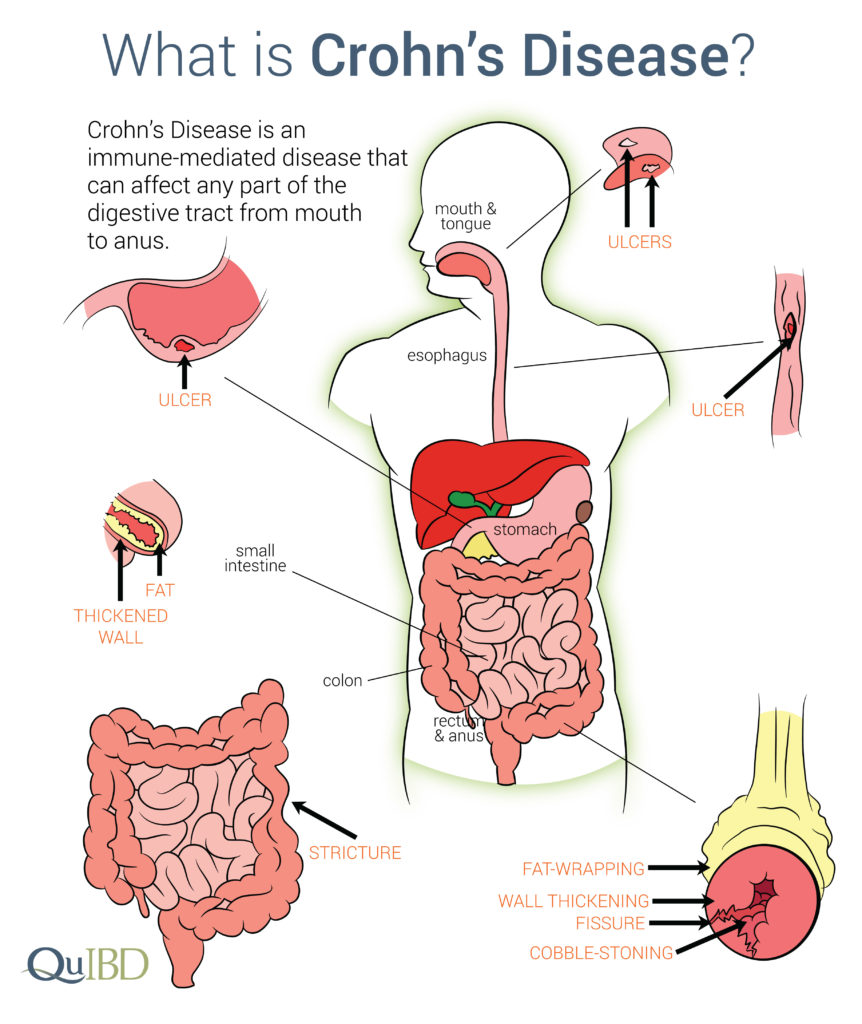 What Causes Crohn’s of Disease

The causes of Crohns’s disease are not well understood. Diet and stress may cause aggravation. However, they do not cause the disease on their own. Most recent research may indicate hereditary, genetics, and environmental factors contribute to the development of Crohn’s Disease.

The GI tract normally contains harmless bacteria, specifically for the aid in digestion. The immune system usually attacks and kills foreign invaders, such as bacteria, viruses, fungi, and another microorganism. Under normal conditions, the harmless bacteria in the intestines are protected form such as attach. IN people with IBD these bacteria are mistaken for harmful invaders and the immune system begins to respond. Cells move out of the blood to the intestines and develop inflammation. Although the inflammation does not disease, leading to chronic inflammation, ulceration, thickening of the intestinal wall, and eventually causing patient symptoms.

Crohn’s tends to be genetic and run in families, so if you or a close relative have the disease, your family members have a much higher chance of developing Crohn’s. Studies have shown that 5% to 20% of affected individuals have a first – degree relative (parents, child or sibling) which one of the diseases. The risk is greater with Crohn’s disease than ulcerative Colitis. This risk is also substantially higher when both parents have IBD. The disease is most common among people of Eastern European backgrounds, including Jews of European descent. In the recent years, and an increasing number of cases have to be documented in the African Amercian population.

A variety of treatment options can assist a person in control of the disease to live a fully active lifestyle. Today there is is no standard treatment that will work for every patient.Each patient’s treatment will be different depending on their situation.
Treatment for Crohn’s and other IBD variations can involve the use of drugs, alterations in diet and nutrition, and occasional surgical procedures to restore or remove affected portions of your GI tract.

Drugs
Drug treating Crohn’s disease is intended to contain your immune system’s irregular inflammatory response that is generating your symptoms. Suppressing swelling not only offers relief from common symptoms like fever, diarrhea, and pain, it also allows your intestinal tissues to heal.
In addition to managing and suppressing symptoms (inducing remission), medication can also be used to decrease the frequency of symptom flare-ups (maintaining remission). With conventional treatment over time, periods of remission can be increased and periods of symptom flare-ups can be reduced. Several classes of medication are being used to treat Crohn’s disease today.
Combination Therapy
In some circumstances, a health care provider may recommend adding therapy that will work together with the primary therapy to increase its effectiveness. For example, combination therapy may also include biologic to an immunomodulator. As with all therapy, there are hazards and advantages of combination therapy. Joining therapies can increase the effectiveness of IBD treatment, but there may also be an increased risk of additional consequences and toxicity.

While Crohn’s Disease may not be the result of bad reactions to specific foods, paying special regard to your diet may help lessen symptoms, replace lost nutrients, and promote healing.
For people diagnosed with Crohn’s disease, it is essential to maintain good nutrition because Crohn’s often diminishes your appetite while boosting your body’s energy needs. Additionally, common Crohn’s symptoms like diarrhea can decrease your body’s ability to absorb protein, fat, carbohydrates, as well as water, vitamins, and minerals.
Many people who experience Crohn’s disease flare-ups find that soft, bland foods cause less distress than spicy or high-fiber foods. While your diet can remain flexible and should incorporate a mixture of foods from all food groups, If you are lactose intolerant, your doctor may recommend abstaining from dairy products. Watch this webcast learns more about nutrition in inflammatory bowel diseases.
Surgery
Even with the proper medications and diet, nearly two-thirds of people with Crohns disease will require surgery. Although surgery does not cure Crohn’s disease, it can maintain portions of your GI tract and return you to the best conceivable quality of life.
Surgery grows necessary when medicines can no longer control symptoms, or if you develop a fistula, fissure, or intestinal barrier. Surgery often includes removal of the diseased segment of bowel (resection), the two ends of healthy bowel are then joined (anastomosis). Although these procedures may cause your symptoms to disappear for many years, Crohn’s frequently recurs later in life.