The stomach is the primary intra-abdominal part of the gastro terminal (GI) or the digestive tract. It is a muscular and high vascular bag-shaped organ that is distensible and may take varying shapes, based on the build and posture of the person and the state of fullness of the organ. The stomach lies in the upper left quadrant of the abdomen. 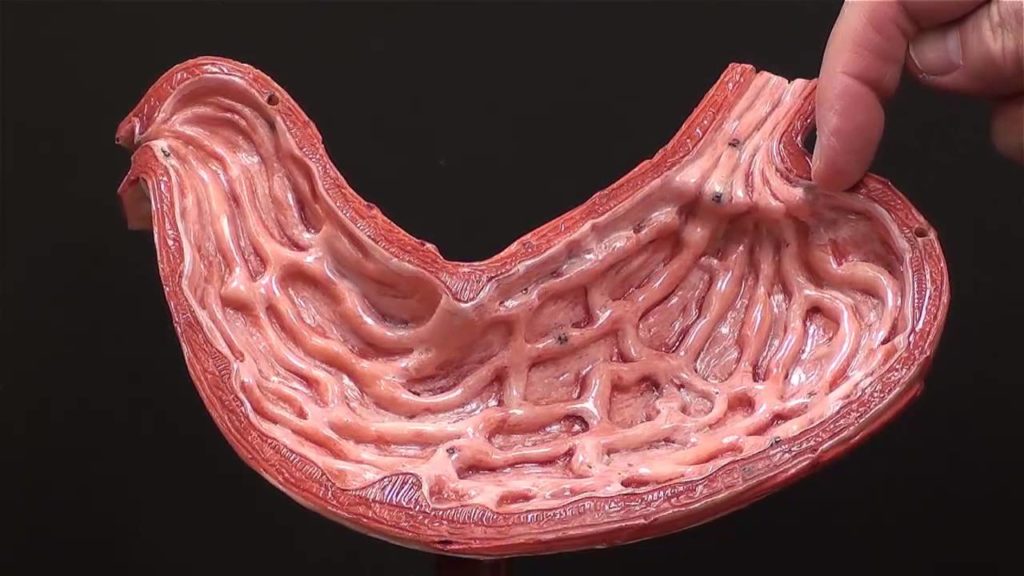 The stomach is the most dilated part of the digestive tube and lies between the end of the esophagus and the start of the small intestine. It The thoracic esophagus opens the abdomen via the esophageal hiatus of the diaphragm at the T10 level. The abdominal section of the esophagus has a mall Intra-abdominal length., in the epigastric, umbilical, and left hypochondriac regions of the abdomen, and fills a recess bounded by the upper abdominal viscera is completed in front and on the left side by the anterior abdominal wall and the diaphragm.

The shape and position of the stomach shift significantly within the inner lining as weel as externally in the surrounding viscera, such so that no one form or shape can be defined as typical. The primary components that determine the size and shape are (1) the amount and quantity stomach contents (2) the stage of the digestive process (3) the degree of development of gastric musculature and (4) the condition of the intestines which are adjacent to the stomach. It is possible for doctors to compare a series of stomachs to determine the commonality of specific markings. 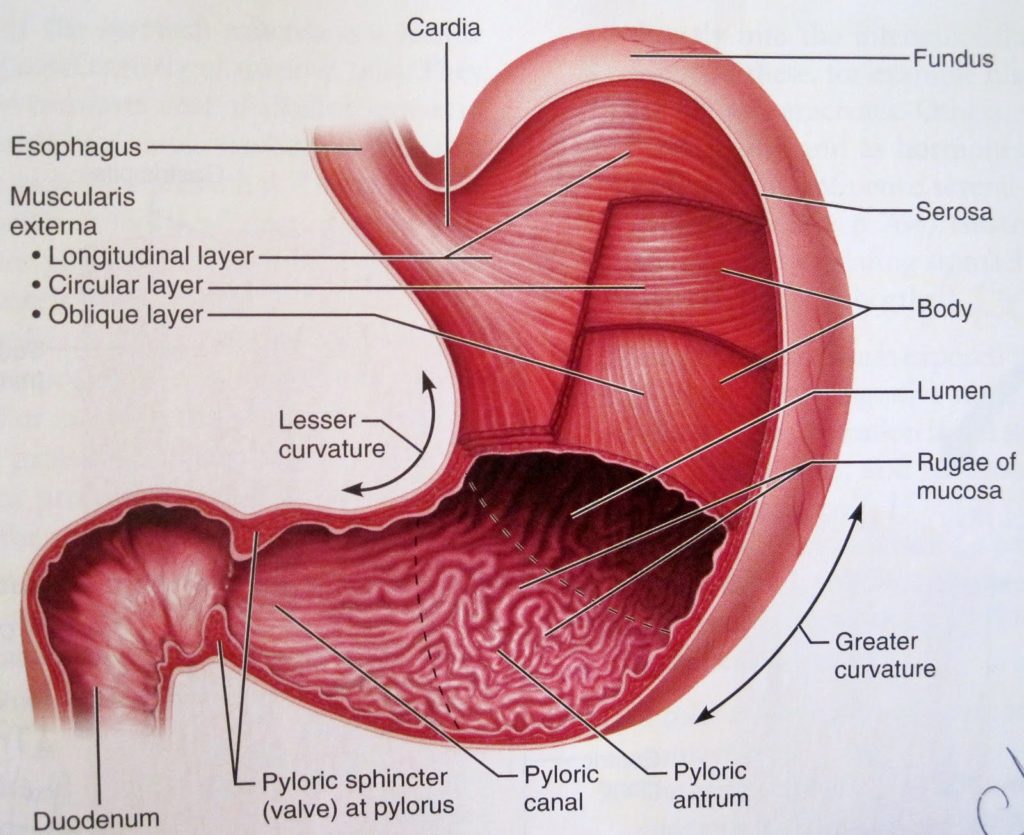 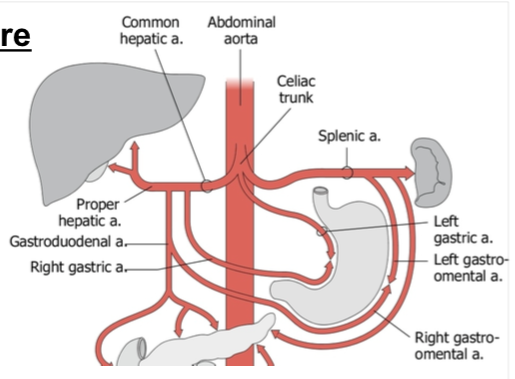 The omental bursa (lesser sac) extends behind the stomach and in front of the pancreas. It interacts with the greater sac ( main peritoneal cavity ) via the omental (epiploic) foramen ( of Winslow) beh9nd the hepatoduodenal ligament (HD)

The stomach and the beginning part of the duodenum that is joined to the liver through the hepatogastric ligament (the left section of the lesser omentum) comprising right and left the gastric vessel. To the let hemidiaphragm by the gastrophrenic ligament to the spleen by the gastrosplenic/gastrolienal ligament comprising short gastric vessels, and to the transverse colon by the gastrocolic ligament (part of the greater omentum) containing epiploic (omental ) vessels. Several peritoneal bands may exist between the posterior exterior of the stomach and the anterior surface of the pancreas. Part of the greater omentum dangles like an apron from the transverse colon 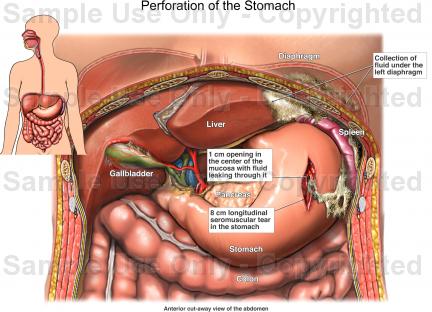 The celiac trunk (axis ) occurs from the anterior surface of the abdominal aorta at the level of L1. It has a little length (about 1 cm ) and then branches into three parts the splenic artery, the common hepatic artery (CHA), and the left gastric artery (LGA)

The LGA runs towards the lesser curvature of the stomach and breaks into branch sloping upwards (supplying the abdominal esophagus) and a branch sloping downwards ((supplying the stomach). The CHA goes toward the right of the superior border of the pancreas and gives off the gastroduodenal artery (GDA), which flows down to the first part of the duodenum. After giving off the GDA, the CHA continues as the proper hepatic artery.

The right gastric artery (RGA), a branch of the proper or common hepcat artery flows beside the lesser curvature from right to left and connects the descending branch of the LGA to from an arcade along the lesser curvature between the two leaves of peritoneum of the lesser omentum. This arcade gives off many small arteries to the body of the stomach. The GDA gives off the PSPDA and then branches into the right gastro-omental (gastroepiploic) artery (RGEA) and the anterior superior pancreaticoduodenal artery (ASPDA)l it also gives off the small supraduodenal artery (of Wilkei). The RGEA flows along the greater curvature from right to left. 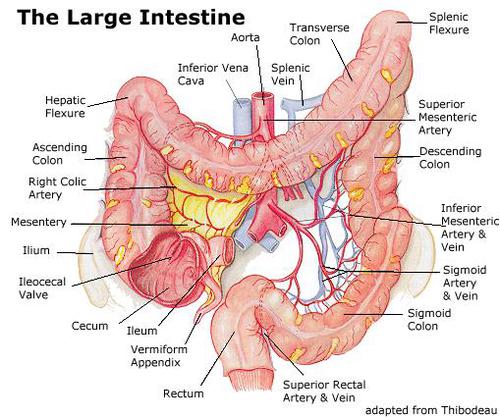 The greater curvature arcade formed by the RGEA and the LGEA provides several omental (epiploci_ branches to provide the highly vascular greater omentum . The splenic artery also gives off 3-5 short gastric arteries that flow in the gastro-splenic gastro-lineal ) ligaments and supply the upper part of the greater curvature and the gastric fundus. Few small posterior gastric arteries may start from the splenic artery. The stomach has a deep network of vessels in its submucosa.

The pylorus is characterized by a prepyloric vein (of Mayo) which rest on its anterior surface. The gastrocolic trunk (GCT ) of Henle is present in sometimes a collective number of cases and lies at the junction fo the small bowel mesentery and the transverse mesocolon. It may flow` branches from the middle colic, and ASPDV and right gastro-omental veins.

The short gastric arteries and veins are occasional collectively referred to as the Vasa Previa.

Lymphatic drainage
Lymph nodes that line the stomach are numbered and divided into four levels as, follows.

Nerve Supply to the stomach

The esophageal plexus of vagus (parasympathetic ) nerves lies in the posterior mediastinum below the hila of the lungs. It divides into two vagal trunks that enter the abdomen besides the esophagus through the esophageal hiatus in the left dome of the diaphragm. The right (posterior) vagus is behind, and the to the right of the Intra-abdominal esophagus, whereas the left vagus is in the front of the intraabdominal esophagus.

The right vagus gives off a posterior gastric branch called the criminal nerves of Grassi, which traverses to the left and provides the cardia and fundus of the stomach; the nerve is so called since it is often missed through vagotomy and is then responsible for the appearance of peptic ulcers. The right vagus spreads to a celiac branch ( which provides transmission elements to the pancreas and the small and large bowels), and the left vagus gives off a hepatic branch (which fulfills the liver and the gallbladder)

After giving off the celiac and hepatic branches, sequentially, the right and left vagal trunks spread to the lesser curvature of the stomach (in close connection with the vascular arcade created by the left and right gastric vessels). Meanwhile, the posterior and anterior gastric nerves of Latarjet, supply the corpus (body) of the stomach, the antrum, and the pylorus.

The stomach reservoir, its size and shape changes from time depending on the volume of its content (fluid/food). The shape and position of the stomach also change with the position of the patinet., whether upright or supine. A large J-shaped stomach can drop as low down as into the pelvis.
Serve pain in any part of the body may give rise to pylorospasm and reflex vomiting.

The innermost lining of the stomach well is mucosa, which consists of columnar epithelium, lamina propria, and muscular mucosa. Submucosa contains a vibrant network of blood vessels and Meissner’s nerve plexus, The smooth muscles of the stomach are designed in 3 layers: inner oblique (unique to stomach) m middle circular (forms the pylorus), and outer longitudinal. These muscles are provided by the Auerbach’s nerve plexus. Serosa is the visceral peritoneum that comprises most of the stomach. Mucosa and submucosa are forced into several longitudinal folds called rugae.