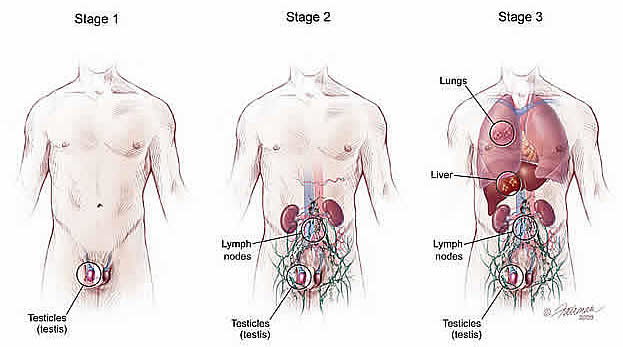 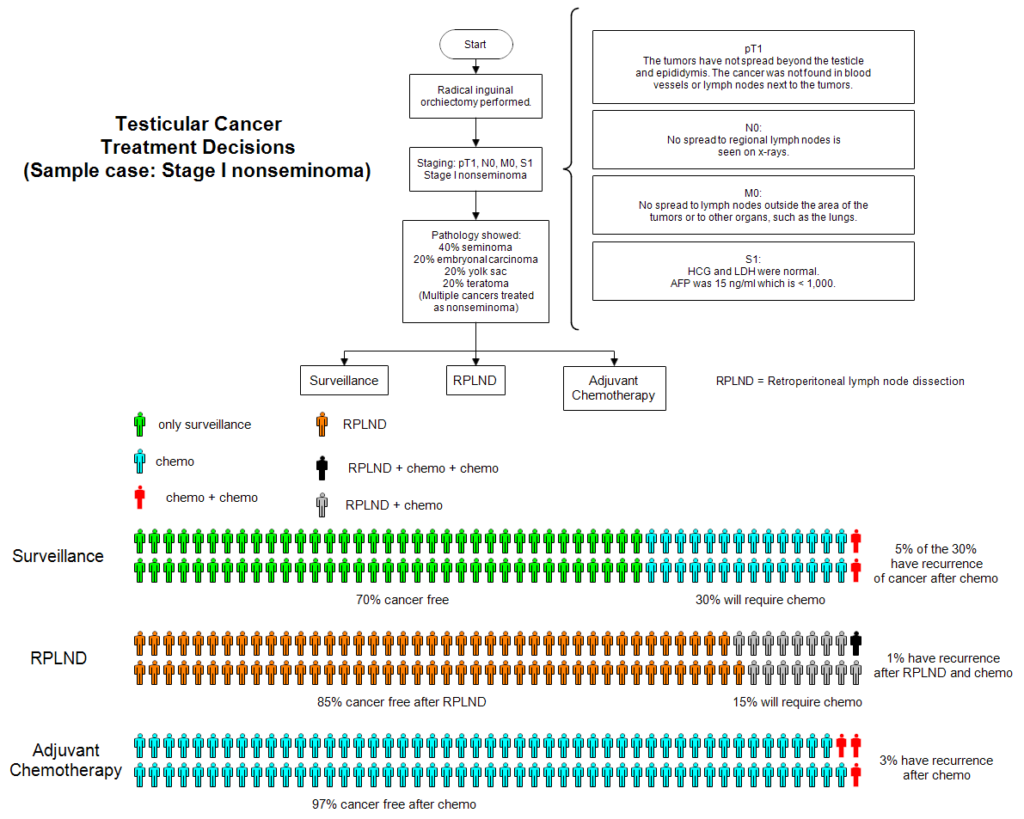 At this stage, the tumor in the testicle is carcinoma in situ (CIS), cancer has not spread outside the testicle and the levels of tumor markers such sHCG and AFP are not elevated.
If at this stage, cancer is diagnosed, after surgery to remove the testicles, no other treatment is needed.

e, cancer is diagnosed, after surgery to remove the testicles, no other treatment is needed.

If CIS is found after a testicular biopsy ( such as for fertility problems), the doctor may recommend that it not be treated immediately. The patient may be observed closely with routine physical exams, blood tests of tumor marker levels, ultrasound of the testicles.
If there are no signs of the CIS growing or turning into invasive cancer, then treatment may not be needed. If CIS is treated, it will likely be with surgery to remove the testicle or radiation therapy.

If tumor markers are at high levels, then cancer is not really at Stage 0 even when only CIS is found in the testicle and there no signs of cancer spreading. This cases ae treated like stage IS cancers.

Stage I seminomas: These tumors can be cured in nearly all patients, They are treated by surgically removing the testis and spermatic cord through radical inguinal orchiectomy, After the surgery, there are several treatment options.

Attentive observation of the patient. If cancer has not grown and spread beyond the testicle, it is preferred treatment choice by doctors, is to be watched closely by your physician for up to 1 yeas with treatments such as radiation and chemo recommended, only if cancer is found spreading outside the testicle. This means that you get a physical exam and blood test every three to six months for the first and less often at that. Your physician will use equipment such as CT scans and/C rays, every three to six months, to get images of the area, and less after the year has passed. If these tests do not find any signs of cancer outside of the testicle, then no other treatments are typically needed. In 15% to 10% of patients, testicular cancer comes back and spreads to lymph nodes or other organs. However, if it odes, then radiation and chemo treatment can still usually cure cancer.

Physicians are less inclined to advise observation if the tumor invades blood, reached the scrotum or lymph vessels in the spermatic cord. In these cases, radiation or chemotherapy is likely a better treatment option.

Radiation therapy – Another option is Radiation therapy focuses on para-aortic lymph nodes ( which are in the back of the abdomen located around the large aorta blood vessel. Due to seminoma cells being vert sensitive to radiation, low doses can be used. Given over 2 to 3 weeks, usually 10 to 15 treatments are administered.

The doctor my advise this because in about 1 in five patients with stage I seminoma, cancer cells have spread outside the tactical, whoever this grow is not capture on the imaging test like CT scans. Radiation therapy can usually destroy the occult or hidden metastases.

Chemotherapy is another option that works well as radiation, which is given in 1 or 2 cycles of chemotherapy – the drug carboplatin after surgery.

Stage IS seminomas – In this stage of cancer, the tumor marker levels is still higher after the removal of the testicle containing seminoma occurs. This is rare, but it is often treated with radiation.

Stage I non-seminomas: Nearly all of this cancer can be cured, but the standard treatment is distinct from that of seminomas. As with seminomas, the first treatment is surgery to remove the testicle and tumor (radical inguinal orchiectomy). Thus the treatment choices depend on the stage.

For Stage IA (Ti there are two choices of treatment:

Attentive observation or (surveillance) – Through surveillance, the doctor may be hep you avoid any potential side effects following surgery. However, this would require many doctor visits and test. The doctor visit and lab test are conducted every two months for the first year, with CT scans every four to six months. In time the visit and test will not have to be as frequent. If cancer comes back, it normally occurs within the first year or two. These relapses are treated with chemotherapy. Even though more patients will have a replace with attentive observation, than lymph node dissection, the cure rates are similar because relapses are typically found in early stages so that it is curable.

Retroperitoneal lymph node dissection (RPLND)L Removal of lymph nodes at the back of the back of the abdomen, has the benefit of a high cure rate but the disadvantages of significant surgery, with its possible complications, including losing the capability to ejaculate normally. Afte RPLND, if cancer is discovered in the nodes, chemo may be prescribed.

Retroperitoneal lymph node dissection ( removal of lymph at the back of the abdomen), If cancer is found in the lymph nodes, chemotherapy is often advised.

Chemotherapy with BEP regimen *bleomycin, etoposide, and cisplatin ( for two cycles, This treatment has a high cure rate, but it can have side effects (which are short-term in most cases) Chemo is used more often in Europe than in the U.S
Careful observation (surveillance): This requires frequent doctor visits and test for several years. This option may be for some patients with T2 tumors. 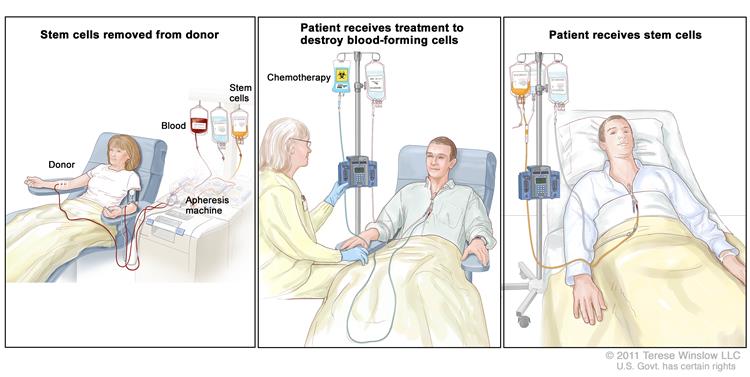 Stage IS non-seminoma If the tumor marker levels (similar to AFP or HCG ) are still high following a testicle removal or tumor removal, but there is nothing seen on a CT scan, chemotherapy is recommended, with three cycles of BEP or four cycles of EP which are etoposide and cisplatin

Stage IIA seminomas: After surgery to remove the testicle (radical inguinal orchiectomy), the favored treatment is radiation to the retroperitoneal lymph nodes. Normally stage II seminomas are given higher dose of radiation than stage I seminomas, This other option is chemo, with either four cycles of EP (etoposide and cisplatin) or three cycles of BEP (bleomycin, etoposide, and cisplatin)

Stage IIB seminomas: Thee seminomas have spread to larger lymph nodes or several different lymph nodes. After surgery to remove the testicle (radical inguinal orchiectomy), chemo is the recommended treatment. Four cycles of EP (etoposide and cisplatin) or three cycles of BEP bleomycin, etoposide, and cisplatin) can be used. Radiation may be an option rather than chemotherapy for patients who do not have lymph nodes enlarge from cancer spreading.

Stage II non-seminomas: After radical inguinal orchiectomy to separate the testicle with the tumor, treatment depends on the residual levels of tumor markers in the blood and the extent of spread to retroperitoneal lymph nodes. Ther are two main option:

Retroperitoneal lymph node dissection (RPLND) the lymph nodes at the back of the abdomen are removed. This is often an option for stage IIA disease. If the lymph nodes removed, contain cancer, additional treatment with chemo might also be required.
Chemotherapy: for many stage II cancers, the recommended treatment is chemo instead of RPLND. Either four cycles of EP (etoposide and cisplatin) or three cycles of BEP (bleomycin, etoposide, and cisplatin) can also be used.
After Chemo, A CT scan is implemented to see if the lymph nodes are still enlarged. If they are, they usually are removed by RPLND.

Even through stage III germ, cell tumors have spread by the time they are found most cases can be cured.

Both stage III seminoma and nonseminomas are treated with radical inguinal orchiectomy, follow by chemotherapy w ith either EP for four cycles or BEP for three to four cycle. Four cycles of BEP are required for patients with poor prognosis on-seminomas normally because they have spread to areas farther away from the testicles, other than the lungs or because of very high levels of tumor markers. If the patient has health reasons that make treatment with bleomycin unsafe, then he may be treated with VIP
(vinblastine, ifosfamide, and cisplatin).

In cases where there are high levels of the tumor, marker HCG is found in a man, distant spread of cancer if seen on scans, and there is a high suspicion that can have a testicular choriocarcinoma, chemotherapy may be started without a biopsy or initial removal of a testicle,

Once chemotherapy is complete, the doctor will look fo national cancer cells left. Patients with normal scans and normal tumor marker levels are usually watched carefully after this and may need no further treatment.

In certain cases, a few tumors are left. Thes are most often in the lung or the retroperitoneal lymph nodes. Additional treatment at this point depends on the type of cancer.

Seminomas- small tumors that are still there after chemo or do not “light up” on a PET scan are often watched with CT scans to see if they grow. If thy do, additional treatment is needed. If the tumors light up on a PET scan, they could be cancerous, and treatment is required. Treatment may be an operation (such as a retroperitoneal lymph node dissection) or chemotherapy utilizing a different combination of drugs)

Non-seminomas: Remaining tumors are usually removed by surgical procedure, which may result in a cure. If cancer is found in the tumors removed, additional chemotherapy (normally for two cycles often with different drugs) might be needed. Another option might start by having additional chemotherapy with different drugs. Surgery might be used after this if any tumors remain.

If the cancer is resistant to chemotherapy or has spread to many organs, the usual dose of chemo may always be enough; Sometimes the doctor might recommend high dose chemo followed by a stem-cell transplant. Patients may also want to contemplate enrolling in a clinical trial of new chemo regimen.

If cancer leaves with treatment and then returns, it is consider recurred or relapsed. Typically happens within the first two years after treatment. In general, if cancer recurs, it is probably best to seek a second opinion from a doctor with extensive experience in treating relapsed testicular cancer before starting treatment.

Treatment of recurrent germ cell tumors depends on the first treatment and where cancer recurs. Cancer that returns into the retroperitoneal lymph nodes can be treated by a surgical procedure to remove the nodes (RPLND) if they recurrence is small and if the only surgical treatment gives before was orchiectomy. Depending on the results of the surgery, chemo is usually recommended. This may be followed by surgery.

If a man ‘s cancer recurs after chemotherapy and chemotherapy are no longer working, he will be treated with a different chemotherapy regimen, which typically includes vinblastine, ifosfamide, paclitaxel, and etoposide.

Treatment of testicular cancer that has come back after chemotherapy is not always as effective as doctors would like, some doctors may recommend higher high dose chemotherapy then stem cell transplant. This may be a better option for some men with the recurrent disease, rather than standard chemotherapy. Clinical trials of newer treatments can also be considered.
http://www.cancer.org/cancer/testicularcancer/detailedguide/testicular-cancer-treating-by-stage