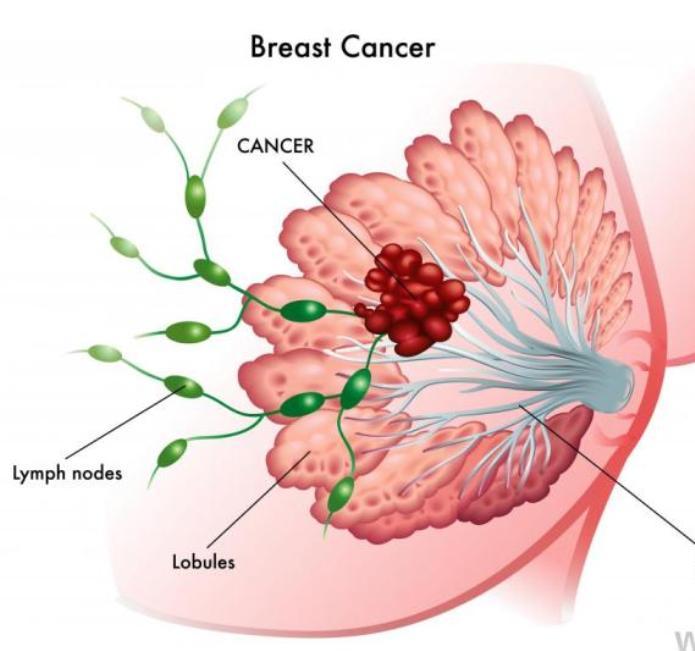 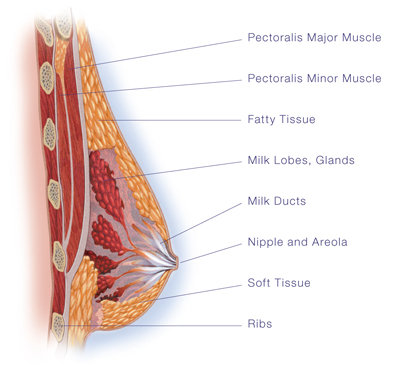 The breast is consist of glands called lobules that produce milk, and the milk is carried through thin tubes called ducts that extend from the lobules, reaching the nipple. The breast also contains fat, connective tissue, lymph nodes and blood vessels.

The most well-known type of breast cancer is ductal carcinoma. This form of cancer starts in the cells of the ducts. Although it can also begin in lobules cells and other tissues of the breast. Invasive breast cancer is a type that begins in a particular part, such as the ducts or lobules and then spreads to the surrounding tissue.

In the United States, breast cancer is the most common type cancer for women, after the skin cancer, which is the # 1 type of cancer. Breast cancer occurs in men and women. However, it is very rare for men to develop breast cancer. Each year nearly 230,000 women are diagnosed with new cases of cancer while only 2,300 or at 1% of the diagnoses are in men. Even though men breast cancer is not common, it sill must be taken very seriously. There are more than 3,000,000 reported cancers of breast cancer in the US. 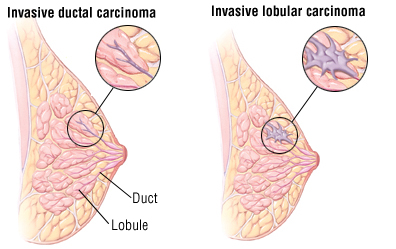 Women whose mother, sister or daughter, has had breast cancer is two to three more times more likely to develop cancer. This risk is particularly pertinent if more than one first-degree family relative has been affected by breast cancer.

Medical researchers have distinguished tow genes in particular, responsible for some instances of genetic breast cancer. These genes identified as BRCA1 and BRCA2. Around one and two hundred carry these genes. Although having them predispose women to develop breast cancer, it does not ensure that she develops it in the future.

There is also a link between hormones an breast cancer. Researchers now believe that women with higher exposure to the hormone estrogen are more susceptible to breast cancer. The estrogen hormone causes cells to divide, and the more cell the division, the higher the likeliness of an abnormal cell becoming cancerous.

A women’s exposure to progesterone as estrogen changes throughout her lifetime, rising and falling. Her age influences these levels, menstruation, the average length of her menstrual cycle and her age during her first childbirth. The risk of breast cancer she starts to menstruation before the age 12, have her first child after the age of 30, stops menstruation after age 55 or have menstruation cycles that are shorter or exceeds 26-29 days. Current data shows that birth control pill hormones likely do not have substantively increase risk. There are some studies that show taking hormone replaced therapy after menopause has cured, may increase the risk of breast cancer, particularly if the therapy is taken longer than five years. This data is still inconclusive. Heavy doses of radiation therapy may be a large factor, low-dose from mammograms should not pose any risk.

In Men, the causes of breast cancer are DNA-based as well. Gene mutations occur during life rather than being passed down through genetic inheirtance. It is not clear what causes these genetic mutations. Some acquired mutations of oncogenes or tumor suppressor genes may result in cancer-causing chemicals in the environment or diet.

Estrogen treatment that were once used by men with prostate cancer could increase the risk factor. Transgender/transsexual people, who take high doses of estrogen, in sex reassignment can develop the higher risk of breast cancer.

There have also been studies on the link between diet and breast cancer. Although lifestyle choices, such as eating obesity are causing foods, drinking alcohol regularly and smoking may promote the disease. Diets that are high in fat content are more likely to develop breast cancer. Lowering a diet that calories from fat is less than 20-39% may help protect her from developing breast cancer.

1 thought on “Ovierview of What Causes Breast Cancer”