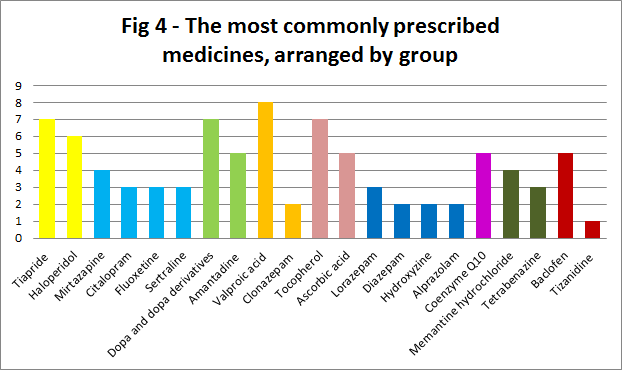 Even though there is currently no therapy available to delay the onset of Huntington Disease (HD) symptoms or prevent its progression, there is a symptomatic treatment for patients, that may assist in improving the quality of life and prevent complications. Similar to other neurological diseases, HD place individuals at higher risk of experiences side effects from medication, particularly cognitive adverse effects. It is important to avoid polypharmacy if possible. Symptomatic treatment for HD can be segmented into drugs to treat the movement disorder medications that are for psychiatric or behavioral problems.

What is Huntington’s Disease (HD)

There are experimental therapies for HD that are being tested in animal models as well as human trials. Gaining knowledge of ongoing research, to find a cure for HD, should be part of the care plan of the individual patient as well as their family.

Therapeutic options include dopamine-depleting agents such as reserpine tetrabenazine and dopamine-receptor antagonist (e.g., neuroleptics). When using these drugs long term, there is the additional risk of adverse side effects. If a patient with HD has Choreic movements, this should be treated pharmacologically only if it becomes disabling to the patient. Neuroleptics may cause degeneration in other features of the disease, such as rigidity, and bradykinesia, causing further functional deterioration.

Tetrabenazine is a dopamine-depleting agent was authorized by the FDA in August of 2008. It may be more effective than reserpine in the treatment of chorea and less likely to cause hypotension. The dose is titrated gradually and may be rising over several weeks to a maximum 75-100 mg/d in divided doses.

Drug Class Summary
Antichorea effects of the central monoamine-depleting agent are thought to be associated with its effect on reversible depletion of monoamines from nerve terminals, as known as either serotonin, dopamine or norepinephrine.

Tetrabenazine ( Xenazine)
Deepelets neurotransmitter stores of noradrenaline, serotonin, and dopamine within nerve cells in the brain, thus adjusting the transmission of electric signals from the brain that control movement by reversibility hindering vesicular monoamine transporter 2 (VMAT2).

Efficacy and safety confirmed in a randomized, double-blind, placebo-controlled, multi-location study. Patients treated with tetrabenazine saw meaningful improvement in chorea compared to patients treated with the placebo. There is additional research supporting this conclusion. Indicated for chorea linked with Huntington disease.

This drug is administered via the mouth, VMAT-2 inhibitor is shown as a treatment for chorea associated with Huntington disease.
Reserpine

Dopamine-depleting agent. Used in the past to treat hypertension.

Carboxylic acid commonly used as an antiepileptic drug, mood stabilizer in mania, and prophylactic agent for a migraine. When mixed with sodium valproate in 1:1 molar relation, termed divalproex sodium. The device by which valproate exercises its antiepileptic effects has not been confirmed; its activity may be linked to heightened brain levels of GABA. No large clinical trials exist to support its use for hyperkinetic movement disorders, but it may be useful, as implied by a few small studies in patients with chorea of different etiologies.
The maximum daily dose of 2000 mg in divided doses (bid or tid) is enough to determine whether the drug is going to be effective for the individual patient.

Clonazepam belongs to benzodiazepine class of drugs, which enhances the activity of GABA, a major inhibitory neurotransmitter in CNS.
Used regularly as an antiepileptic drug. May be beneficial in the treatment of chorea, but no large clinical trials exist to support its use. Does not induce parkinsonism or carry the risk of tardive syndromes, as neuroleptics do; therefore, an adequate trial of this medication is reasonable before using dopamine antagonists.
Maximum daily dose of 2-4 mg divided bid/tid usually is enough to determine effectiveness for the individual patient.

These agents may enhance choreic movements in patients.
Risperidone (Risperdal)

An antipsychotic agent that belongs to a newer chemical class called benzisoxazole derivatives.
This is considered antagonist of type 2 dopamine and serotonin receptors.
Less likely than typical neuroleptics to cause parkinsonism.
Haloperidol (Haldol)

This is the initial or first of the butyrophenone class of major tranquilizers. Typical neuroleptics, such as haloperidol, are potent dopamine-receptor antagonists and are recommended to be used only as a physician’s last recourse to treat chorea.

Drug Class Summary
Depression is relatively common in patients with HD and should be treated pharmacologically as quickly as the diagnosis of depression is given. Depression in subjects with HD can be administered the same agents used for the treatment of depression of any other cause. SSRIs can be applied as first-line therapy since they have a low adverse-effect profile, convenient dosing, and safety in the event of an overdose. Other antidepressants can be used, including bupropion, nefazodone, venlafaxine, and the tricyclic antidepressants. Electroconvulsive therapy can be effective if a quick intervention is needed and in patients who do not respond to numerous trial-effective medications.

Paroxetine (Paxil)
Paxil is SSRI that can be used once daily. Most patients should take it in the morning because can be stimulating and may cause insomnia. If sedation occurs, the drug should be taken at bedtime. A few patients develop sexual problems, such as decreased libido, anorgasmia, or ejaculatory delay.