Idiopathic Thrombocytopenic Purpura or ITP is a blood disorder that causes a abnormal reduction in the number of blood platelets. Platelets are cells in the blood that helps you stop bleeding. When there is a decrease in the platelet cells, then it can result in easy bruising, internal bleeding and bleeding of the gums. The “idiopathic” portion actually means that the cause is not known. Thrombocytopenic Purpura means that there is decrease in blood platelets. The “purpura” refers to purple skin discoloration due to bruising. Currently ITP affects four to eight children out of 100, 000 under the age of 15 in the U.S

There are two forms of ITP:

Acute Thrombcytopenic Purpura – is the most common form, often seen in young children (2 to 6 years old). There can often be symptoms apparent following some type of viral illness, such as the chickenpox or measles. Acute ITP can have a sudden onset with symptoms disappearing in less tan a six months after appearing. Often this can happen in a few weeks. The disorder only stays for a short time and usually does not recur.

Chronic Thrombcytopenic Purpura can happen at any age. The symptoms will last for a minimum of 6 months to several years. More often form chronic ITP than children. Females are two to three times more likely to develop ITP than males. With Chronic ITP, the person will need to be under the continual follow-up care of a hematologist ( or blood specialist).

t causes of ITP are not known. It is not a contagious disease, so it’s not possible to contract it from another person. Parents nor can children cause the disorder. Often a child will have a viral infection about three or so weeks before ITP is developed in the body. When the body is making antibodies to fight against a virus, the body can accidentally make antibodies that stick to the blood’s platelet cells. The body will recognize any cell with antibodies as foreign, so it will destroy the antibody along with the platelet attached to the cells. This why ITP is also called immune thrombyctopenic purpura.

The bone marrow with a spongy, soft center on long bones create blood and platelet cells. In the event that the body has a low number of blood platelets the bone marrow should respond by producing many more to send out to the body.  In many cases the body may be producing cells normally, but the body is also  destroying them causing them platelet levels to drop.  ITP platelets only survive a few hours while normal platelets should have a lifespan of 7 to 10 days.

There are  few signs an symptoms that indicate ITP in a child. 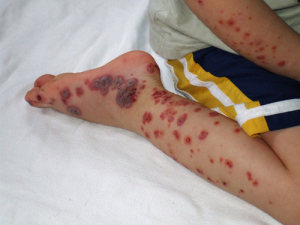 By undergoing test, of complete blood count CBC, the measures of size, number and maturity of different blood of defined volume are measured. Urine and additional blood test to analyze any infections. A bone marrow aspiration may be performed to look at platelet production.

There are specific treatments for your child that your chid’s doctor can prescribed based on:

There are case where some children do not require treatment at all. They only need to be monitored. Many children are able to spontaneously recover in 2 to 4 days.

The most common treatments are:

There are other forms up treatment as well.

During care you want make sure your child is in a safe environment, padding on the crib, wearing helmets, protective clothing are all important. Contact sports, riding bikes and rough play should be restricted. Avoid medications that contain aspirin, which can affect the body ability to control and stop bleeding.

Although there is no cure for ITP, the prognosis of a child with ITP is very good. Usually at some point the body will stop making antibodies that attack the blood platelets and the disorder will resolve by itself. During treatment it’s important to keep a child’s platelets in a safe range. Overall prevention of bleeding is the highest priority. Prompt medical care can help your child live a long healthy life.