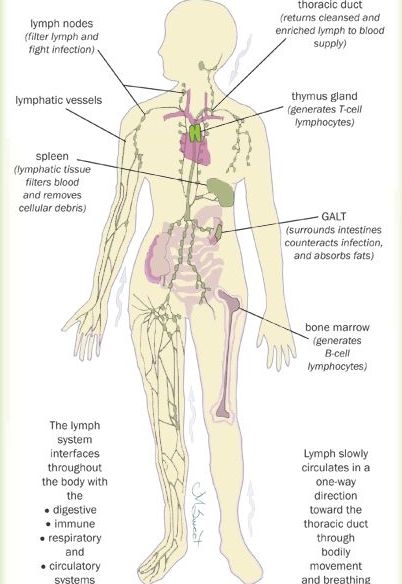 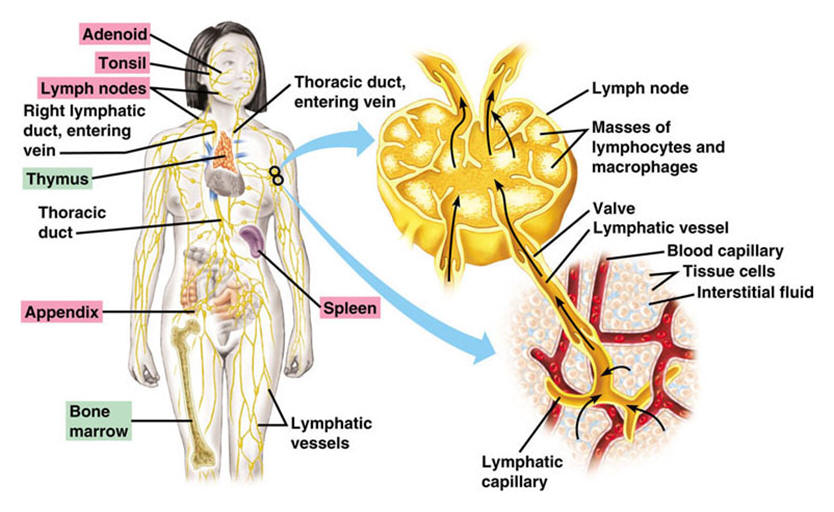 he Lymphatic system and the immune system work closely together as the share multiple organs and physiological functions. The Immune system helps protect the body from bacteria, infectious pathogenic viruses, parasitic animals, and fungi. The immune system helps manage the harmful agents that will attack the body from growing and causing more damage. The lymphatic system consists of vessels, modes, and capillaries. Among other organs that transport lymph fluid from other tissues, returned to the blood stream. The lymphatic tissue works as a filter that cleans the lymph of pathogens, debris, and abnormal cells. The lymphatic system moves fatty acids into the circulatory system from the intestines.

The Anatomy of the Immune and Lymphatic System.

B lymphocytes, known as B cells; these are cells that fight off specific pathogens throughout the body. B cells activate by contacting the pathogen; then it will create antibodies by forming plasma cells. These antibodies will neutralize pathogens until other immune cells come in to destroy them completely. Once the infection leaves, memory B cells will exist in the body and will quickly develop antibodies to any infection that occurs afterward, by pathogens that express the same antigen.

T Lymphocytes, known as T cells; that fight off pathogens as well by helping other immune cells attack pathogens directly. Once the infection has left, memory T cells will stay within the body to act faster to any subsequent infections by antigens existing within pathogens.

1. Eosinophils are granular leukocytes that will reduce the allergic inflammation that helps the body defend itself against parasites.

2. Basophils are granular leukocytes that will cause inflammation by releasing heparin and histamine chemicals Basophils is active producing inflammation during allergic and parasitic infections.
3. Neutrophils are also granular leukocytes that act as the first responders to the site of an infection agent that, it will move quickly to a site of infection. Once at the site of the infection, the neutrophils will use phagocytosis and consume the pathogens and release the chemical that trap and kill the pathogens.

Monocytes are agranular leukocytes that can from macrophages and dendritic cells.
1. Macrophages are monocytes that will respond slowly to the infection site, and once it is at the site of the infection, it would develop macrophages. Thes are phagocytes that consume pathogens as well as destroy debris through phagocytosis and ingest pathogens. Macrophages prevent further infection by cleaning up the damage from an infection.
2. Dendritic cells are Monocytes that develop dendritic cells within healthy tissues of the mucous membranes and skin. These cells will detect pathogenic antigens that activate B cells and T cells.
3. The third is NK cells or natural killer cells. These are lymphocytes, found in the spleen, lymph nodes, and red bone marrow will respond to many of the cancerous cells and pathogens. NK cells will travel inside the blood to find most types of the body’s infections.

Lymph Capillaries
Lymph capillaries work to drain extra fluids that are inside the bodies tissues from around the cells when it ready to be filtered by the lymphatic system. Blood plasma that passes throughout the body system also diffuses through the capillary walls, which are thin allowing the blood to penetrate in space that are between the cells of the tissues. To prevent the accumulation of excess fluids, lymphatic capillaries, which are small dead-end vessels extend through the body’s tissues to absorb fluids and return them to circulation.

Lymph
Lymph is the interstitial fluids picked up through lymphatic capillaries. Lumphic resembles plasma found in the veins. The fluid is a mixture consisting of 90% water 10% solutes, which includes cellular waste, hormones, and dissolved gasses. There are bacterial cells, obtained from infected tissues and white blood cells, which fight these pathogens. For some pages with late-stage cancer, their lymph may often contain cancerous cells that have metastasized from tumors and form new tumors with the lymphatic system. There is also a special type of lymph or chyle produced within the digestive system as lymph. These receive triglycerides from the intestinal villi. Because chyle has triglycerides inside, it shows a milky white coloration.

Lymph Nodes
Lymph nodes are very small kidney shaped-organs within the lymphatic system. The body has hundreds of lymph nodes, which can be found mostly in the abdomen and thorax. The greatest mass of lymph nodes are in the axillary (armpit and the inguinal (groin) areas of the body. A dense, tough connective tissue forms the outside of each lymph node. Inside, the lymph node, filled with reticular tissues is made up of macrophages and lymphocytes. The lymph nodes filter lymph that enter the lymph verses. The reticular fibers within the lymph node enclosure catches cells or debris that are present in the lymph. The macrophages and lymphocytes will then attach and eliminate any microbes detected in the reticular fibers. A variety of lymph vessels will the transfer the cleaned lymph from the lymph node towards the lymphatic ducts.

Lymphatic Nodules
The lymphatic nodules are outside of the lymphatic vessels and nodes there are sections of non-encapsulate lymphatic tissues or lymphatic nodules. These nodules, correlated with the bodies mucous membranes, help prevent pathogens from intruding into the body’s open cavities.

The body has five tonsil – 2 are lingual, two palatine, and one pharyngeal. The lingual tonsils are posterior root to the touch near the pharynx. Palatine tonsils are posterior of the mouth near the pharynx. The pharyngeal pharynx is also called the adenoid, which is positioned in the nasopharynx at the posterior end of the nasal cavity. The tonsil has many B and T cells to protect the body from ingested or inhaled chemicals and substances that may harm the boy. The tonsils typically become inflamed due to an infection.

Peyer patches are small sections of lymphatic tissues, located within the ileum of the small intestine. Peyer patches contain T and B cells to monitor the contents of the intestinal lumen for pathogens. The T and B Cells spread and adjust the body to fight possible infection if it gets antigen of a pathogen.

Spleen. The spleen is a leveled, oval-shaped organ positioned in the upper left quadrant of the abdomen lateral to the stomach. The spleen is made up of a thick, tough connective tissue capsule filled with regions known as red and white pulp. Red pulp makes up a significant part of the spleen’s core, is so named because it contains many sinuses that filter the blood. Red pulp comprises reticular tissues whose fibers separate impaired or destroyed red blood cells from the blood. Macrophages in the red pulp digest and convert the hemoglobin of the obtained red blood cells. The red pulp also collects many platelets to be released in response to blood loss. White pulp located within the red pulp enclosing the arterioles of the spleen. It is formulated from the lymphatic tissue and contains many T cells, B cells, and macrophages to fight off infections.

The thymus is a little, three-sided organ located just posterior to the sternum and anterior to the heart. The thymus creates and trains T cells during fetal development and childhood. Consisting of glandular epithelium and hematopoietic connective tissues, T cells formed in the thymus and red bone marrow mature, develop, and multiply in the thymus throughout adolescence. The vast majority of T cells do not survive their training in the thymus and are eliminated by macrophages. The remaining T cells increase throughout the body to the other lymphatic tissues to fight infections. When someone reaches puberty, the immune system is mature, and the role of the thymus is lessened. After puberty, the dormant thymus is slowly replaced by adipose tissue.