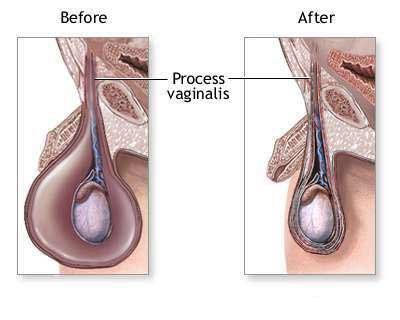 A hydrocele is a painless buildup of watery fluid around both of the of testicles that cause the groin or scrotum area to swell. This swelling may be unsightly and uncomfortable but is normally not painful or dangerous. However, a hydrocele is common in newborns; they can also happen at any age in later life.

What causes a Hydrocele?
It is unknown what causes hydroceles.
Hydroceles in newborns may suggest there is an opening between the abdomen and the scrotum. Typically these opening close before birth or shortly after.
Hydroceles hat appears later in life can be caused by an injury or surgery to the groin or scrotum area. Or hey can be triggered by inflammation or infection fo the epididymis or testicles, in rare cases, hydroceles may transpire with cancer of the testicle or the left kidney. This type of hydrocele can occur at any age but most common in men older than 40.

Most hydroceles are present birth. Between 1 to 2 percent of newborns have a hydrocele. Babies that are born prematurely have higher risk ave a hydrocele.
IN men hydrocele mostly affect men over the age of 40. Risk factor for developing a hydrocele later in life include:
Scrotal injury
Infection, including sexually transmitted infections (STIs)

Symptoms of Hydrocele:
Mots of the time hydrocele does not cause symptoms. You may notice enlargement of your scrotum. Some symptoms can include pain, swelling or redness of the scrotum or a feeling or pressure at the base of the penis.

How is a hydrocele diagnosed?
A hydrocele is regularly diagnosed by an exam of the scrotum, which may appear enlarged. As par of the medical examination, your physician will shine a light behind each testicle (transillumination). This is to evaluate if the masses are solid and that may be caused by other problems, such as cancer of the testicle hydrocele are filled with fluid so that the light will shine through them transillumination. The light will not pass through solid masses that may be caused by other problems, such as testicular cancer. An ultrasound may be used to validate the diagnosis of a hydrocele. 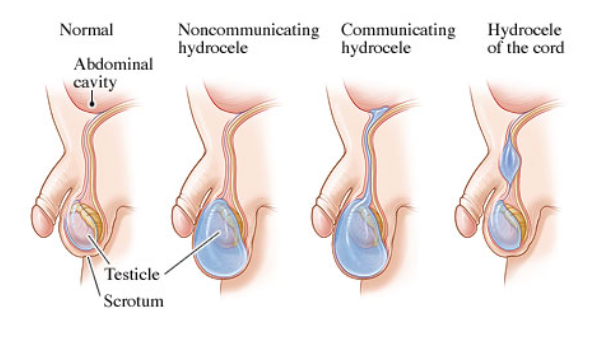 How is Hydrocele Treated?
Hydroceles are not usually serious and are treated only when thy began to cause pain and distress or when they decrease the blood supply to the penis (rare). Treatment is not ordinarily needed if a hydrocele does not have a change in size or gets tinier as the body reabsorbs the fluid. Hydrocele in men younger than 65 may go away by themselves. However, hydroceles in older men do not usually go away
Fluid can also be removed form a hydrocele with a needle aspiration. But hydroceles that are often aspirated return an surgery may then be needed. Aspiration is recommended only for men who are not physically able to have surgery because of the risk f infection and recurrence.
If the hydrocele gets bigger or causes discomfort, surgery to remove the hydrocele (hydrocelectomy) may be needed.