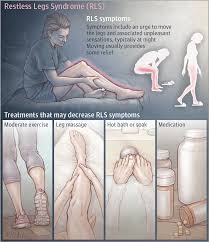 Restless legs syndrome (RLS) is a condition of the nervous system that produces an urge to move the legs. Since it usually intervenes with sleep, it also is thought to be a sleep disorder.

Symptoms of Restless Legs Syndrome
People with restless legs syndrome have discomfort in their legs (and occasionally arms or other areas of the body) and an irresistible urge to move their legs to reduce the feeling. The condition creates an uncomfortable, “itchy,” ” needles and pins,” or ” crawly” sensation in the legs. The responses are ordinarily worse at rest, mainly when lying or sitting.

The seriousness of RLS symptoms extends from mild to unbearable. Symptoms can appear and leave, and severity can also vary. The signs are usually become more severe in the evening and at night. For some people, symptoms may cause critical nightly sleep disturbance that can significantly diminish their quality of life.

Who Gets Restless Legs Syndrome?
Restless legs syndrome may impact up to 10% of the U.S. population, over 30 million people. It strikes both men and women, however, is prevalent in women and may start at any age, even as young as children, although most people who suffer severely are middle-aged or elderly.

RLS is often misunderstood or misdiagnosed. This is precisely a case when a patient’s symptoms are sporadic or mild. Once accurately diagnosed, RLS can often be managed and treated successfully.

Reasons for Restless Legs Syndrome
Unfortunately, In the most cases, physicians do not know what produces restless legs syndrome; nevertheless, they suspect that genes may be a factor. Nearly half of those with RLS also have a close relative with the condition.

Other causes linked to the development or deterioration of restless legs syndrome and signs include:

Chronic diseases. Chronic conditions and medical disorders, including; diabetes, iron deficiency (lack of iron), kidney failure, Parkinson’s disease, and peripheral neuropathy often comprise symptoms of RLS. Therapy and treatment of these conditions often provide some reprieve from RLS symptoms.
Medicines. Certain types of drugs, including antipsychotic medications anti-nausea drugs, some antidepressants, and allergy and cold medications having sedating antihistamines, may enflame symptoms.
Pregnancy. Some women encounter RLS during pregnancy, specifically in the last trimester. Symptoms generally leave within the first month following delivery.
Other factors, including sleep deprivation and alcohol use, may generate symptoms or worsen them. Enhancing the quality of your sleep or removing alcohol consumption in these instances may ease symptoms. 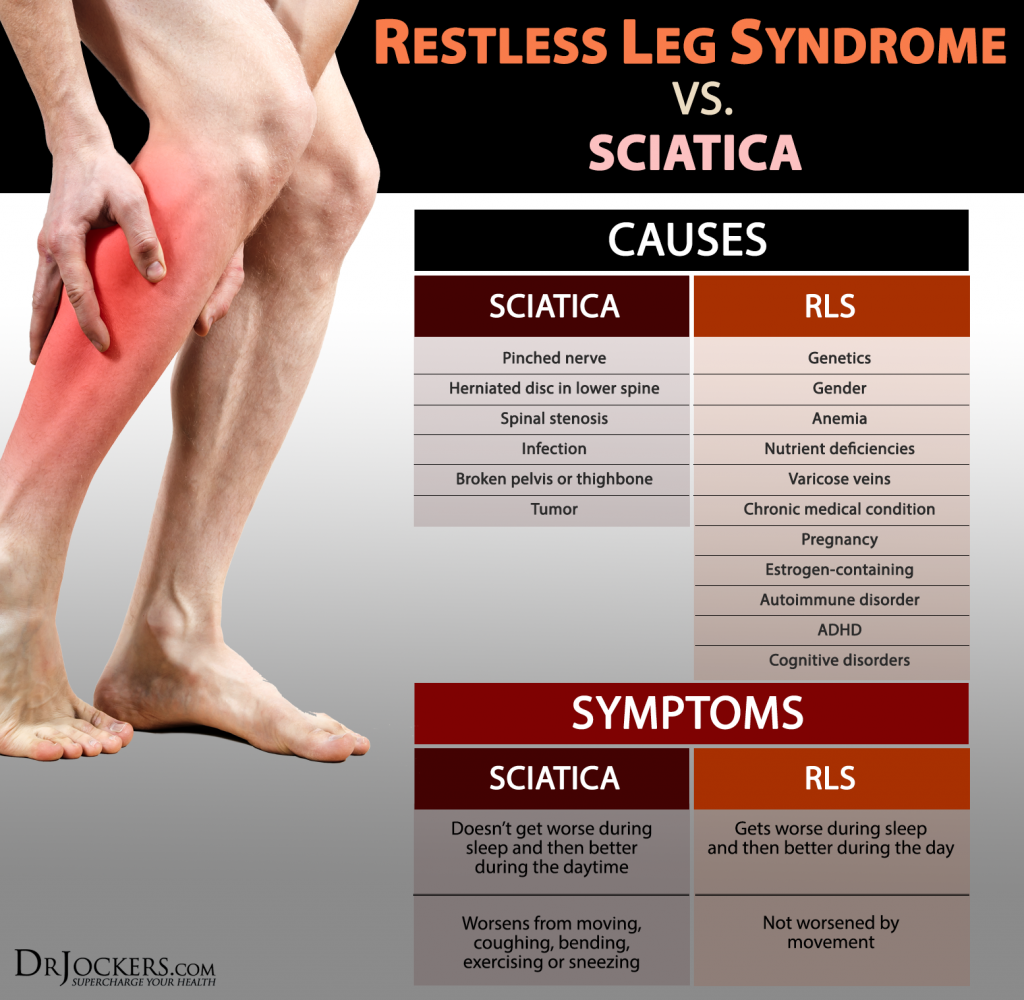 Determining Restless Legs Syndrome through Diagnosis
No official medical exam can diagnose RLS; however, the physician can use blood tests and another test to rule out other types of conditions. The diagnosis of RLS is grounded on a patient’s symptoms and replies to questions the doctor will ask you regarding your family history of medication use, parallel symptoms, the existences of other symptoms or medical conditions, or issues with daytime sleepiness.

Treatment for Restless Legs Syndrome
Treatment for RLS is aimed at reducing symptoms. In individuals with mild to considerable restless legs syndrome, lifestyle adjustments, like starting a routine exercise program, forming regular sleep patterns, and eradicating or lessening your caffeine, tobacco and alcohol consumption can be beneficial. Treatment of an RLS-linked illness also may deliver reprieve of symptoms.

Other non-drug RLS treatments may include:

Medications used to manage RLS include:

Abnormal itching, tingling, or “crawling” feelings happening deep within the legs; these sensations may also transpire within the arms.
Restlessness – Rubbing the legs, jitteriness, floor pacing, tossing and turning in bed,
A gripping urge to move the limbs to relieve these senses.
Symptoms may happen only when you are sitting or lying down. Occasionally, persistent symptoms worsen when lying down or sitting and increase with activity. In very severe instances, the symptoms may not subside with exercise.

Sleep irregularities and daytime sleepiness
Periodic, Involuntary, repetitive, jerking limb movements that happen either in sleep or while being awake and at rest; these movements are referred to as intermittent limb movement disorder or periodic leg movements of sleep. Nearly 90% of individuals with RLS also have this condition.

In some people with RLS, the symptoms do not happen each night but are interment. These people may experience weeks or months without encountering symptoms (remission) before the RLS symptoms return.

What is Sciatic Neuritis: Causes, Symptoms and Treatments

Causes of RLS
The particular causes of restless legs syndrome (RLS) are not known. Disease in the blood vessels of the legs or in the nerves in the legs that control leg movement and sensation was once thought to cause RLS, but both of these suggestions have been rejected.

RLS may be linked to abnormalities in brain chemicals (neurotransmitters) that help control muscle movements, or to aberrations in the portion of the central nervous system that controls automatic movements. Research is still being done in these areas.

RLS can sometimes be created by an underlying medical condition (secondary RLS); however, most of the time the cause is not apparent.

What Are Health Conditions Linked to RLS?
Various medical conditions have been associated with RLS. The two most common conditions are iron-deficiency anemia (low blood count) and peripheral neuropathy (impairment of the nerves of the legs and arms often triggered by underlying conditions such as diabetes).

Other medical conditions linked to RLS include:

What Are the Risk Factors for RLS?
In many cases, RLS seems to to have a genetic association and to run in families. Individuals with a hereditary connection to RLS have some tendency to get the condition earlier in life.

In most individuals with restless legs syndrome (RLS), poor sleep and daytime sleepiness are the most bothersome symptoms. Many people do not link their sleep issue with the unusual sensations in their legs. If you have these sensations, be sure to mention it to your doctor. This provides an essential clue to what is causing you to sleep poorly.

There are no image exams or lab test that can verify if you have RLS.

However, specific tests can assist in identifying the underlying medical ailments such as metabolic disorders ( such as kidney disease or diabetes) and anemia that may be associated with RLS:

Polysomnography (sleep testing) can be required to diagnose the sleep disruption and ascertain if you have repetitive limb movements. This is particularly significant in people who proceed to have notable sleep disturbances notwithstanding relief of RLS symptoms with treatment.

Treatments for RLS
There is not a cure for primary restless legs syndrome, or RLS, however different therapies regularly can benefit and relieve symptoms. Therapy for subsequent restless legs syndrome (RLS created by another medical dilemma) includes administering treatment for the underlying cause.

The Initial Step in Treating Restless Legs Syndrome
The first line of defense against restless legs syndrome is to avoid elements or foods that may be causing or worsening the problem. Stay away from caffeine, alcohol, and nicotine. This may assist relieve your symptoms. Also, evaluate all medicines you are taking with your physician to decide if any of these medications could be creating the problem.

Any underlying medical conditions, such as anemia, nutritional deficiencies, diabetes, anemia, kidney disease, thyroid disease, varicose veins, thyroid disease, or Parkinson’s disease, can be treated. Dietary supplements to improve vitamin or mineral deficiency may be prescribed. For some people, these therapies are all that is required to alleviate RLS symptoms.

Electrical stimulation. Occasionally stimulating your toes and feet with vibrations or electrical impulses can provide relief from RLS symptoms. Some people have a resolution when they do this for a several minutes before they go to sleep. Ask your physician for more information.

Acupuncture. There’s no hard proof that acupuncture helps with symptoms, yet many people with RLS give it a try to relieve symptoms.

Doctors don’t know the produce RLS, and there’s no cure. But certain things can trigger symptoms. Understanding your triggers and how to avoid them will help.