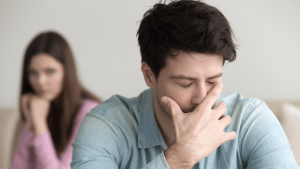 According to medical studies, fife may not be so bad when you are going through a breakup. Apparently, it’s easier than you think.

Of course, breaking up is a difficult thing to do. People tend to buy into that idea that you should become a hermit for few months, mope around, eat tons of chocolate and ice cream, while you cry about the fact that you will never find love again. Although, there are health components to going through a breakup that can make you better deal and cope with issues in the future.

The fact may be, for most people, that ending a romantic relationship is like ripping off a bandaid rather than enduring months of heartache. The issue is that we tend to grossly overestimate how bad a breakup will be and how long we will be impacted by it, according to two Northwestern University Psychology researchers, Eli Finkel and Paul Eastwick.

Turns out, concluding a romantic relationship is more like tearing off a bandaid rather than undergoing months of uncomfortable pain, at least for most people. The dilemma is, most of us highly exaggerate how severe a breakup will be and how long it will affect us, according to Eastwick and Finkel. Breakups tend to be imagined worse than reality.

It’s obvious that breakups are terrible things and they aren’t anything that seems pleasant about them, they are distressing and painful. People often feel high levels of stress and anxiety. However, when you ask people to predict or guesstimate how bad they believe it’s going be, people will routinely think its worse than what it is.

How to Survive a Breakup
Eastwick and Finkel’s study included participants who were all freshmen and had been dating in a relationship for two months or longer. They answered questions about how much in love they felt, as well as how terrible they’d feel if the relationship ended. Then they completed biweekly questionnaires online, reporting whether they were dating.

Eventually, the research concentrated on 26 people, with 16 men and 10 women, whose romantic relationships discontinued during the initial six months of the study. On average, they’ve dated for 14 months at the start of the study.

In cases where the relationship ended, they answered questions about the anxiety of level over the next three months. The researchers examined the predicted anxiety with actual pain at four different time periods after the breakup.

Overall, the students assumed a much grimmer picture about handling a breakup than what occurred,  Eastwick and, Finkel found. There were no differences in genders with mistaken predictions dealing with the breakup.

As expected the those who were more likely to predict doom-and-gloom were individuals who had described themselves as being greatly in love with their partner, those who did not initiate the split, and those who said they would not be likely to begin a new relationship quickly if the existing one ended.

Those who were more in love with their partner were a little more distressed after the breakup,” says Finkel. “But they exceedingly overestimated how upset they would be in the future.”

After the initial distress over the breakup, most seemed better pretty quickly, the researchers say. “Our first evaluation was approximately one week after the breakup,’’ Finkel says, “and the forecasting error [that they would feel agony] was already possible that soon following the breakup.”

“Participants were essentially back to ‘normal’-their pre-breakup level of happiness-at about the two-month mark,” Eastwick tells WebMD. “That’s on average, of course.”

Overestimating the Anxiety
How do these studies explain the conclusions that surviving a breakup is easier than most people think it will be? People don’t know much they will be able to bounce back.

It may be common to over-estimate distress exactly at the time of the breakup, says Eastwick, “due in part because when you are predicting your future, you are thinking about all the dreadful things [of not being in a relationship.]”

Shortly after the breakup, however, the individual may start to think about good things that are occurring or good things about being single, the researchers say. For example, the students might look forward to going home at the end of the quarter and visiting old friends or not having to organize and sync schedules with their partner. Or it could dawn on them that they may meet someone new to date.

While none of the study subjects were married, Finkel says, “We are reasonably certain these results will infer to marriage.”

He expands, “We aren’t saying a two-month relationship and a marriage [seperating] are equally traumatic,” The failure in forecasting how bad things will be is what will probably be similar, he says.

Bouncing Back From a Breakup
The recent research connects into preceding studies finding that most new singles don’t realize how much they will spring back after a traumatic experience, says Massachusetts Institute of Technology’s Dan Ariely, PhD, and Alfred P. Sloan Professor of Behavioral Economics

“When unfortunate things happen, the future is not as depressed as we think,” he says. “We often believe that over time we will be better of, but we mispredict exactly how we will feel the day after. The error is the day after [the breakup], the immediate bias.”

Turns out, the predictions of how difficult it will be after a distressing event are almost always wrong, states Ariely. “Almost at the instance, it occurs, [people] are much better than they think they will be.”

The new research also prompts another interesting question, Ariely says, “What is this confused prognostication causing people to do? Is it prompting people to continue in relationships for a longer time period [dispite it not being ideal] because they think it will be terrible to break up?”