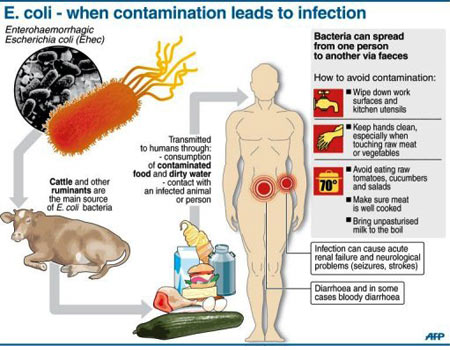 Every couple of months it’s common to hear about an E. Coli breakout. In these case there can be hundreds of people across the country, who get ill by consuming products with E.coli bacteria, leading to countless recalls on foods like ground beef, chicken salads, lettuce, celery and even bottled water.

In this article, we discuss what typically happens in when there are is an E. coli breakout and how you can protect yourself and your family.

What is E.coli and how common is it in found in food?

E. coli is short for Escherichia coli, which is a bacteria found within a few environment, in food, within both the human and animal intestines. There are many strains of E. coli that are are harmless. There are also, dangerous strains that can make you very ill, causing bloody diarrhea, respiratory illness, pneumonia, urinary tract infections and kidney failure according to the CDC.

We often think of E. coli contamination be associated with undercooked meats, but what other cases can food have E. coli?

Over the last couple of years, E. coli outbreaks have been linked to many other types of foods, such apple cider, produce, unpastured diary products. Fresh produce has called more outbreaks than any other food source over the ten years according to the research conducted by the Center for Since in the Public Interest.

There are various points of bacteria contamination during food processing. Meat can be contained during the slaughtering process if cattle feces laden with bacteria is present. Contaminated cattle feces can also wash down file wing it rains, flowing in crop fields and other fresh fruits and vegetables. Milk can become contaminated when cow feces comes into direct contact with it. Restaurant workers, who have contaminated feces, don’t properly wash their hand also spread the bacteria.

How common is E. coli infection?

In a CDC report the number of infections with a strain known as E.coli 0157, the major cause of outbreaks, fell by a third in 2014 compared to 2006- 2008. These numbers do not include recent outbreaks. The full results are known completely because not everyone reports E.coli outbreaks. According to the CDC estimates. 1 in 6 people gets sick from food contamination each year, in the U.S. This figure also include food-borne illness from organisms other than E. coli.

How ill can E. coli make you?

There are different levels of illness from the very extreme foodborne illness,

(HUS) or commonly referred to as Montezuma’s revenge or travelers’ diarrhea. It can often be treated with dirnking plenty of fluids and resting. In cases where you have persistent vomiting, fever or bloody diarrhea, you may need to get medical help.

HUS can lead to a type of kidney failure, which typically affects about 10% of people who get e. E-coli, and 1 in 10 of people who get HUS die from it. Some people have weakened immune systems, children, sickly or the elderly, which can contract more critical E. coli infections, according to the CDC.

What is the medical care you need if diagnosed with E. coli?

In many cases, it may be possible to set out a minor infection, with rest and drinking plenty of fluids. People typically get sick anywhere from 2 to 8 days after eating contaminated food.

In many cases, symptoms leave within the week. However, if you do not feel better after that time, you should consider seeing a doctor. In many cases, antiboitics are not recommended due to the potential increase in the risk of complications. Doctors may also warn against the use of anti-diarrheal medications as this can cause the bacteria to stay in your system longer.

How do you lower the chance of getting sick?

The first thing you can do is choose your foods wisely. Make sure your food is stored safely low temperatures, eat at with restaurants with high-quality safety scores and good food prep practices.
Avoid unpasteurized dairy foods and apple cider. Beef should always be cooked thoroughly to 160 degrees F.

When you are shopping separate produce from the met. Once you are home, do not put meat above produce in the refrigerator since contaminated meat juices can drip down on the produce. Wash the produce as well as you can. This will not get rid of contamination but it will hep. Be careful with sprouts as E. coli may lodge inside the seed.

Proper hand washing is critical for preventing the spread of E. coli

Check the restaurant grades and health score, if a place looks unclean, do not risk it to eat there.
Do not use the price of a restaurant to determine safety. Expensive ones are no better than cheaper ones. The most important factor is the cleanliness and preparation practices.