is a condition that causes deterioration to the optic nerve of the eye and tends to get worse over time. Glaucoma is related to the build-up of pressure inside the eye. Glaucoma tends to be inherited and may not show up until later in life.

The heavy pressure, called intraocular pressure, can damage the optic nerve, which transmits images to the brain. If damage to the pick never from high eye pressure continues, glaucoma will cause permanent loss of vision. Without proper treatment, glaucoma can cause permanent total blindness within a few years.

Since most people with glaucoma do not have early symptoms or pain from increased pressure, it is essential to see your eye doctor frequently so that glaucoma can be diagnosed and treated before a severe loss in vision occurs.

Why Does Pressure Rise in the Eye and Cause Glaucoma? 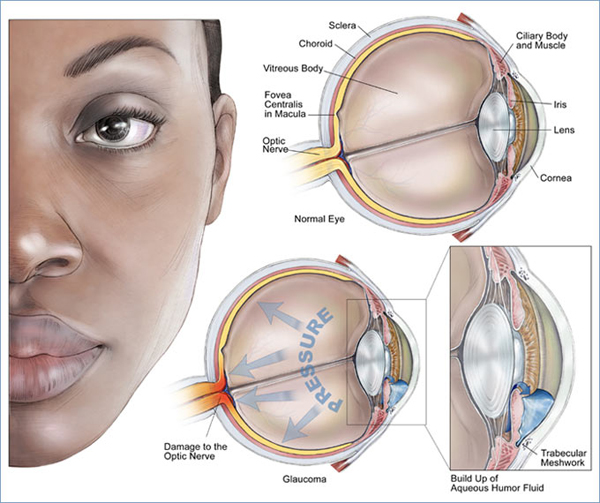 Glaucoma usually happens when pressure increases. This can happen when fluid is not circulating normally in the front part of the eye.

This fluid, called aqueous humor, regularly flows out of the eye through a mesh-like channel. If this channel becomes obstructed, fluid increases in the eye causing glaucoma. The direct cause of this blockage is not known, but doctors have found out it can be inherited, genetically, meaning it is passed from parents to children.

The Less common reason of glaucoma included a direct hit or chemical injury to the eye. severe eye infection, blockage of blood vessels in the eye. Inflammatory conditions of the eye, and occasionally eye energy to correct another condition; Glaucoma normally occurs in both eyes, but it may involve each eye to a different degree.

Angle-closure glaucoma This is also called by acute or chronic angle closure or narrow- angle glaucoma the type of glaucoma is less common in the western hemisphere than in Asia; Poor drainage occurs due to the angle between the cornea and iris, which is too narrow, physically blocked by the iris. This ailment leads to a sudden buildup of pressure in the eye.

Glaucoma most often occurs in adults over age 40, but it can also occur in young adults, children, and even infants. IN African-MAricans, glaucoma occurs more frequently and at an earlier age and with greater loss of vision.

You are at a higher risk of glaucoma if you: 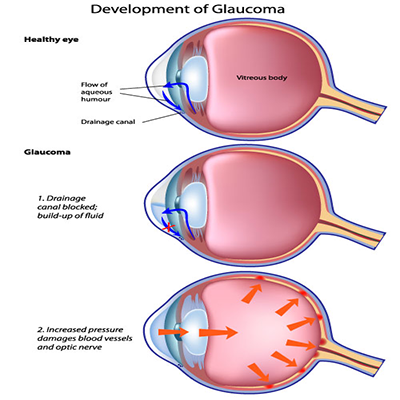 Most people do not feel any severe symptoms or glaucoma, The first sign of glaucoma is the frequent loss of peripheral or side vision, which can go overlooked until late in the disease. This is why glaucoma is often called the sneaky thief of vision.

Early Detection of Glaucoma is one reason to have a complete exam with an eye with an eye specialist every one or two years. Occasionally, intraocular pressure can rise to severe levels. IN these cases, sudden headache, eye pain, blurred vision, or the appear of halos around lights may occur.

If you have any of the following symptoms, seek immediately medical care:

How is Glaucoma Diagnosed

To diagnose glaucoma, an eye doctor will evaluate your vision and examine your eyes through dilated pupils. The eye exam normally focuses on the optic nerve, which has a distinct appearance in glaucoma. Having photographs of the optic nerve can also be an effective way to follow the progression of the disease over time as the optic nerve appearance changes. The surgeon will also perform a procedure called tonometry to evaluate eye pressure, and a visual field test, if necessary, to determine if there is a loss of side vision. Glaucoma test is painless and takes a little time. 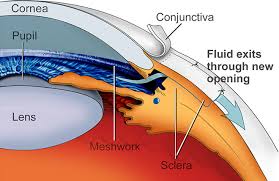 How is Glaucoma Treated?
Glaucoma Treatment may include simple prescription eye drops or more complex treatments such as laser surgery or microsurgery.

Eye drops for glaucoma. These either reduce the fromation of fluid in the front of the eye or increases it flow. Side effects of glaucoma drops can include allergy, redness of the eyes, burning, stinging, blurred vision and irritated eyes. You need to inform your doctor about any other medications you are currently taking or in which you are allergic.

Laser surgery for glaucoma disease, will slightly enhance the outflow of the fluid from the eye in open-angle glaucoma or reduce the fluid blockage in angle-closure glaucoma.

Types of laser surgery for glaucoma include:

Trabeculoplasty – laser is used to pull open the trabecular meshwork drainage area
iridotomy – a tiny hole is made in the iris, allowing the fluid to flow more freely.
Cyclophotocoagulation – a laser beam treats areas of the middle layer of the eye, reducing the creation of fluid.

Microsurgery for glaucoma is implemented through a procedure called trabeculectomy, in which a new channel is created to drain the fluid, thus reducing the intraocular pressure that produces glaucoma. However in some cases, this form of glaucoma surgery fails and has to be redone. Also, complications of microsurgery for glaucoma can include temporary or permanent loss of vision, as well as bleeding or infection. For other patients, a glaucoma implant may be the best option.

Open-angle glaucoma is most generally treated with various combinations of eye drops, laser trabeculoplasty, and microsurgery. Traditionally in the U.S., prescriptions are used first, but there is increasing evidence that some people with glaucoma may respond better to early laser surgery or microsurgery.

Congenital or Infant glaucoma — indicates you are born with glaucoma– This type of glaucoma is primarily treated with an operational procedure, due to the cause being a very distorted drainage system.

Discuss with your eye doctor to determine which glaucoma treatment is best for you.
Can Glaucoma Be Prevented?
Glaucoma is not preventable, but if it is diagnosed and treated early, the disease can be managed.

What is the outlook for people with Glaucoma

At this time, loss of vision caused by glaucoma is reversible and cannot be restored. However, However successfully lowering eye pressure can help prevent further visual loss from glaucoma. Most people with glaucoma do not go blind if they follow their treatment plan and have regular exams.