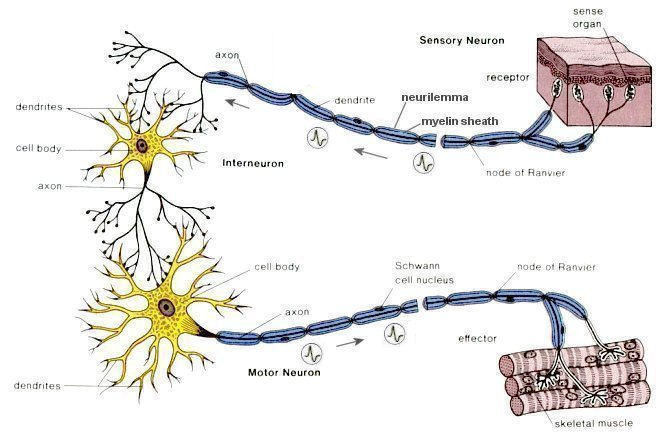 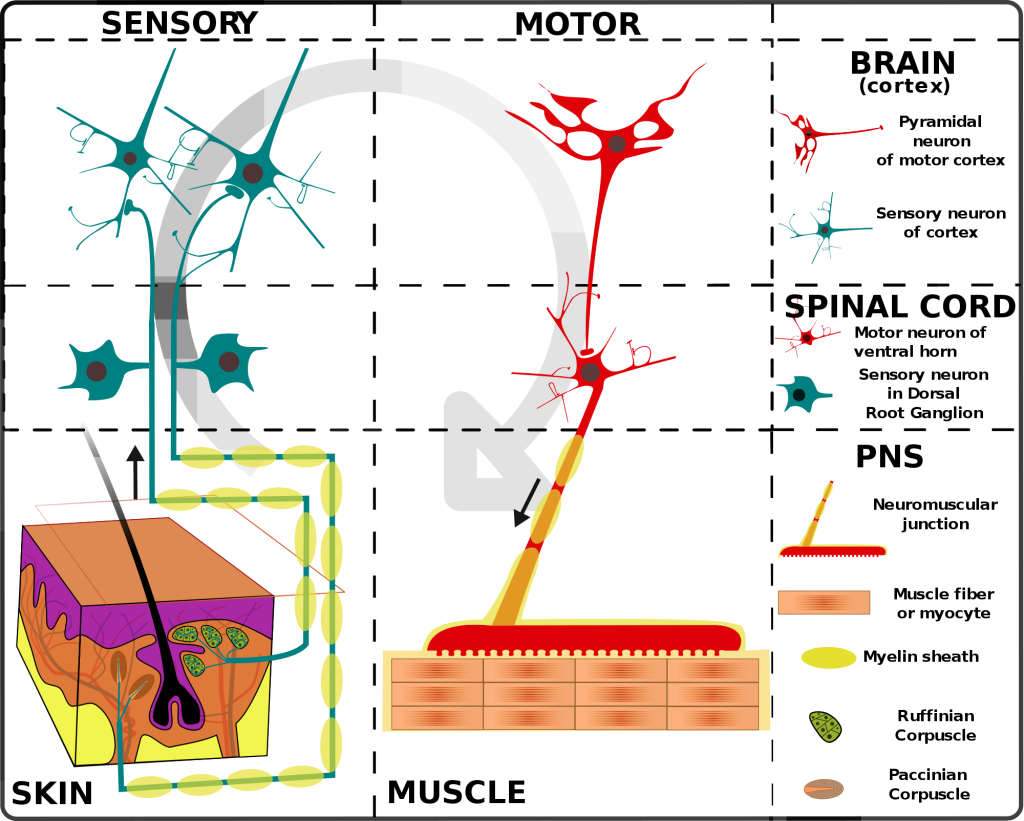 The nervous system is a very elaborate collection of connected nerves and cells that are called neurons. These neurons transmit signals to different areas of the body. This serves as the electrical system wiring.

The functionally of nervous falls into two major subdivisions: the somatic or voluntary component; and the automatic or involuntary, part; and the autonomic or uncontrolled component. The autonomic nervous system controls certain Body processes, such as blood pressure and the rate of breathing, which works without knowing the effort, according to Merk Manuals. The somatic system consists of nerves that connect the brain and spinal cord with muscles and sensory receptor in the skin.

A Description of the nervous system

The nerves are a tubular bunches of tissues that begin in the brain and central cord and branch out to all of the other parts of the body.
Neurons send signals to other cells through thin fibers called axon’s which released neurotransmitter chemicals from tissue linkages called synapse. A synapse gives direction to the cell and the entire communication system, which takes an about a fraction of a millisecond. 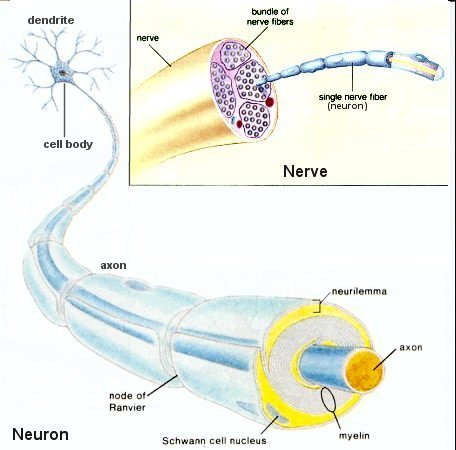 Glial cells, meaning “glue” in Greek are specialized cells that protect nourish and support nerve cells. These cells are sometimes called neuroglia or non-neuronal cells, that main homeostasis, from myelin. Homeostasis is the property of the body system in which all the variables, chemicals, temperatures are regulated so that the internal neurological conditions remain stable and relatively consistent.

Diseases of the Nervous System:

There are several common disease of the nervous system one of the prevailing symptoms that they all have in common is the pain, which is nerve related. There are over 100 million people who experience chronic pain in the U.S
The most common nerve disorders which IH experience functional difficulties are:

Epilepsy – Epilepsy is a chronic neurological disorder, in which recurrent and unprovoked seizers are continuously triggered. Many people with epilepsy have multiple types of seizure and may have other symptoms of neurological problems as well. The brain is the source of the disease, where electrical events produce the seizure symptoms to occur in the brain and spreads to the rest of the body. These seizures are described in two ways primary generalized seizers Primary generalized seizures begin with widespread electrical discharge that involves both sounds of the brain. Partial seizures start with an electrical discharge that is limited to on area of the brain, and can be caused by head injury, brain infection tumor, or stroke.

Parkinson’s disease (PD) is a chronic and progressive movement disorder that worsens over time. Today nearly one million people are living with Parkinson’s disease. The cause of Parkison’s disease is not known, and there is no cure. However there are treatment options such as medications and surgery to help control symptoms. Parkinson’s disease is the malfunction or death of critical nerve cells called neurons. It primarily affects neurons located in the substantia nigra region of the brain, these neurons produce dopamine and sends messages to other parts of the brain to control movement. As PD progresses, the number of dopamine decreases ,causing the person to be unable to control movement.

Multiple Sclerosis (MS) is a potentially disabling disease that occurs in the brain and spinal cord. MS occurs when the immune system begins to attack the protective sheath (myelin) that covers the nerve fibers. It beings to cause communication problems between the brain and the rest of the body. Over time, the disease causes nerves themselves begin to deteriorate or become permanent damage. The signs and symptoms depend on the amount of nerve damage and which nerves are affected. There is no cure for multiple sclerosis. However, there are treatments that can help quicker recovery from these attacks and modify the course of the disease to manage symptoms.

Amyotrophic Lateral Sclerosis ( ALS) is a gradual neurodegenerative disease that affects nerve cells in the brain or spinal cord. The Greek meaning of Amyotrophic means “A” means no, “Myo” refers to muscle and “trophic” is nourishment – No muscle nourishment”. In cases where the muscles received no nutrient, it develops “atrophies” which means it begins to wither alway. “Lateral” is the spinal cord region, where the body cells signals and control muscles movement is located. Sclerosis is the scarring or hardening of the region. There are two different types fo ALS sporadic and familial. Sporadic, which is the most common, nearly 90 to 95% of all case. It can affect anyone anywhere. Familial ALS accounts to 5 to 10 presence fo all instances in which the disease is genetically inherited.

Alzheimer diseases are the most common form of dementia. It general is it means memory loss and the loss of other knowledge critical enough to interfere with daily life. Alzheimer’s disease is responsible for 60 to 80 percent of dementia. Alzheimer’s typically affect people 65 and older. It is not just a disease of old-age however, early onset of Alzheimer’s can appear in someone who is in their 40s or 50s. Over time, Alzhimers worsens as the dementia symptoms deteriorate over a number or yeas. In early stages, there is mild memory loss and in the late stages of Alzheimer’s a person loses their ability to carry on conversations or respond to their environment. There is no cure for the disease, and current teammates can not stop Alzheimer’s from progressing, they can only temporarily slow the worsening dementia symptoms and improve the quality of life for those with Alzheimers and the caregivers.

Also, the nervous system can be affected by vascular disorders such as:
Stroke – A stroke is the rapid loss of brain function from the decline in blood flow to a specific area of the brain. There are two basic types of strokes. The first is a Transient Ischemic Attack, which is caused by the blockage of one or more arteries feeding the brain. The second is a Subarachnoid hemorrhage in which there is a rupture or leakage in the artery or vein in the brain. In these cases the brain is not getting the blood it needs, causing cells to die. Ischemic strokes are more than nine times more frequent than hemorrhagic strokes.

Thre are also infections that affect the nervous system such as:

Encephalitis – is an inflammation of the brain. Viral infections are the most common cause. Ece[haltis can cause flu-like symptoms, along with confused thinking, seizures and problems with sense and movement. Severe cases of encephalitis are rare yet can be life threating. The exact cause of encephalitis is not known. Although bacterial infections and noninfectious inflammatory conditions may also cause encephalitis. There are two conditions that can affect the brain. Primary encephalitis, which occurs when the virus or another infectious agent comes in direct contact with the brain. The infection may be concentrated in on area or spread around. The primary infection may reactivate the virus if it is inactive. Secondary postinfectious encephalitis is impaired immune system reaction in which the respond to an infection to somewhere else in the body. Rather than solely attacking the cells causing the disease, the immune system attacks healthy cells.
Polio – Poliomyelitis is a highly infection viral disease that affects young children. It can be transmitted to others through faecal-oral or through contaminated water or food that affects the intestines and invades the nervous system. There is no cure for polio, but can be prevented by immunization.
Epidural abscess – An epidural abscess is a collection of infected pus-filled material between the outer covering of the brain and spinal cord. Epidural abscess is caused by a rare disorder caused by an infection in areas between the bones, skull, spine, and the membranes called meninges.

Treatments for this disease can vary from anti-inflammatory drugs and pain medications such as opiates to implanted nerve stimulators and wearable devices.

The Study of nervous system

Neurology is the study of the nervous system. Doctors who practice this field of medicine are called a neurologist. Once a neurologist complete medical training and specialty training they must be certified by the American Board of Psychiatric and Neurology (ABPN).
Many psychiatrists are physicians, working to rehabilitate patients that have experienced disease or injury to their nervous system and it impacts their ability to function. 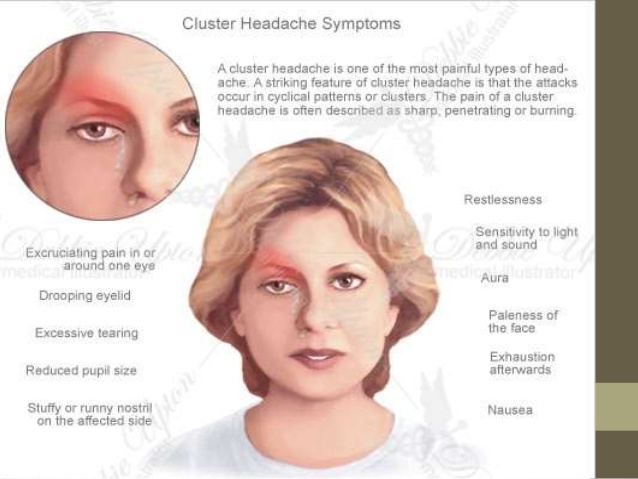 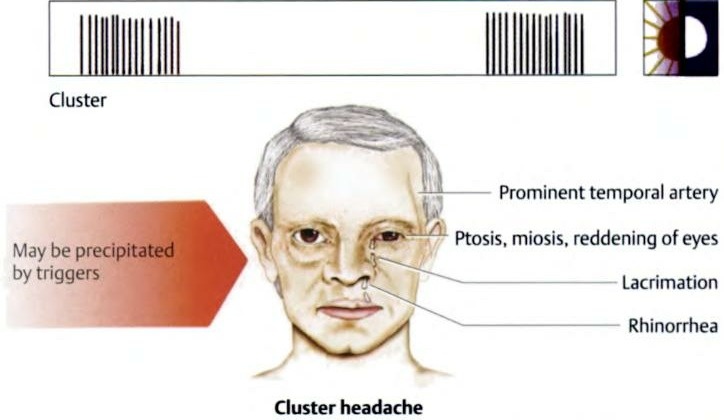