The digestive is a complex composition of different organs working together to convert food to the energy and nutrients that the body needs to function. The food will flow through a long tube inside the body. This tube is known as the alimentary canal or also called the gastrointestinal tract (GI Tract). The alimentary canal starts at the oral cavity, and extends from the pharynx through the esophagus, stomach small intestines, to the large intestines. There are also several other accessory organs that help the body properly digest food, how ever food does not pass through these organs. Accessory organs that help the digestive system are your teeth, tongue, salivary glans, liver, gallbladder and pancreas The 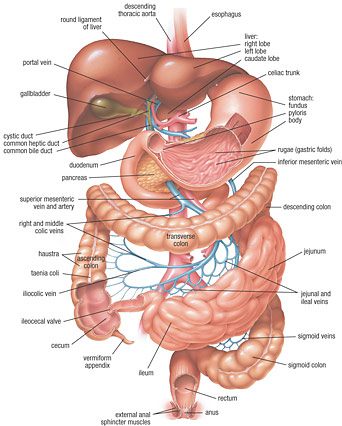 se organs all work together to provide energy and nutrients to the body, There are six major  functions that happen within the bodies digestive system.

The Anatomy of the Digestive System 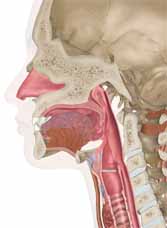 Food digestion begins at the mouth, or  oral cavity. Inside the mouth, with the help of the accessory organ, such as the tongue, teeth and salivary glands, food is initially broken down. The teeth will begin to chop and break food down into smaller pieces as it is moistened by the salvia, before the tongue and other muscles push the food to the pharynx.

The Pharynx or Throat

The pharynx is tube shaped as a funnel, that is connected to the posterior end of the mouth. THe masses  of chewed food passes through the pharynx to from the mouth to the esophagus. Within the respiratory system, the pharynx passes through air from the nasal cavity to the larynx and then the lungs. Since pharynx has two different functions, for the respiratory and digestive system, it uses the epiglottis, which is  flap that switches the rout of food to the esophagus and air to the larynx.

The Stomach is rounded hallow muscular organ that is located on the left side of the abdominal cavity, which is inferior to the diaphragm. It is between the esophagus and the duodenum. The inner layer of the stomach is full of wrinkled rugae, known as gastric folds, which allow the stomach to stretch. The average person size stomach is the size of two fist next to each other.  The stomach organ acts as the storage container for food so that the body can properly digest it. If humans did not have the st 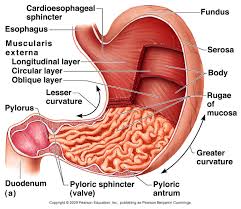 orage capacity of  the stomach, we would have to eat constantly instead of just a few times a day. The stomach has hydrochloric acid, mucus and digestive & sanitizing enzymes that continue the process from the mouth.

The Liver and Gallbladder

The liver is located on the right of the stomach and inferior to the diaphragm and superior to the small intestine.  The liver is a  trianglar-shaped accessory organ. It weights about 3 pounds, and is the second largest organ in the body. Although the liver does many jobs in the body, handling: metabolism, immune system, storage of nutrients, it’s main duty to help digest food and produce  bile and secretion into the small intestine. The gallbladder is a small, pear-shaped organ that is posterior to the liver. It’s about 3

The pancreas is a large gland that is inferior and posterior to the stomach, and about 6 inches long. Its shaped like a lumpy snake, It sets in the upper abdomen.  There are two glands in the pancreas: The first is a digestive exocrine gland and a hormone producing endocrine gland.  The second is the exocrine gland, which excretes enzymes to break done proteins lipids and carbohydrates in nucleic acids in food. 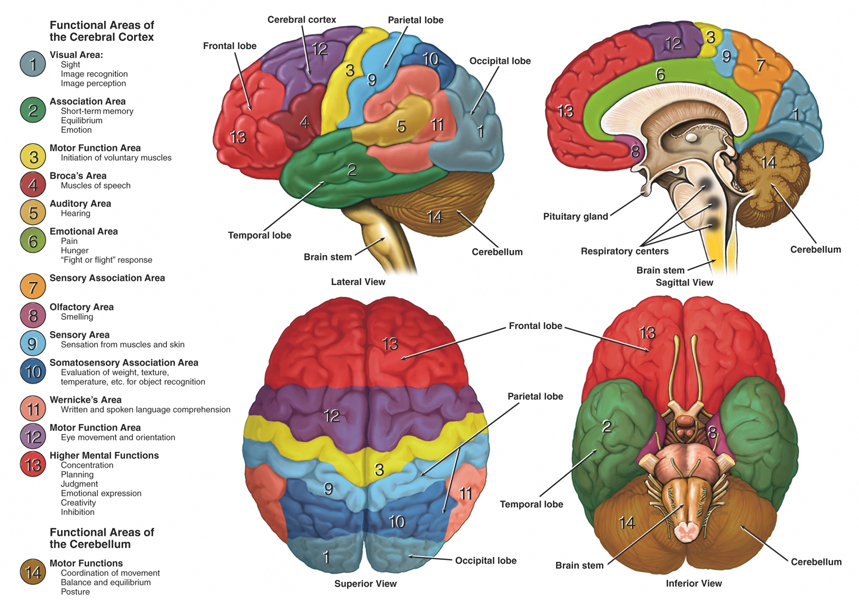 1 thought on “Basics Of The Human Digestive System: Anatomy”