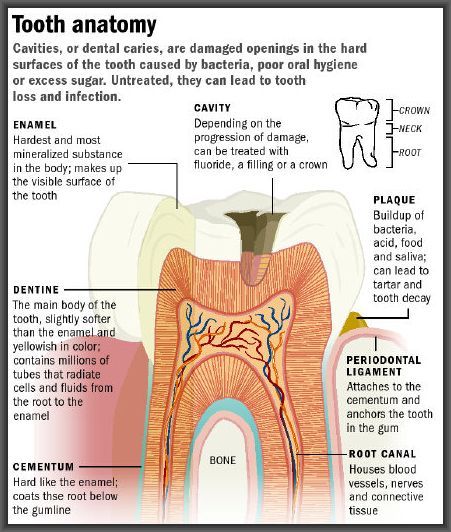 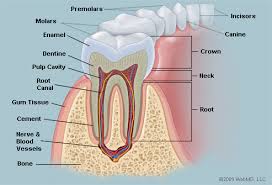 Dental anatomy focuses on the oral cavity. The oral cavity is the first area of digestion, where food digestion begins. The surrounding area of the mouth and the supporting structures of the mouth, help contribute to the digestive process in one or more ways. The primary structures that are found in the oral cavity are the lips, cheeks, tongue, hard palate, soft palate, teeth, gums and salivary glands and the upper and lower jaw. The teeth are very important as well. Maintaining the teeth for digestion and nutrition is essential. Teeth are critical to chewing process but affect the speech and appearance.

To understand the anatomy of the oral cavity, its important to have a clear grasp of the terminology that is used.

Human Dentition – These are the teeth that located on the upper and lower jaws, collectively called the human dentition

Maxillae – The upper jaw knows as the maxillae

Maxillary Teeth – These are teeth loaded in the maxillae to form an arch in the mouth.

Mandible – The lower Jaw of the mouth

Mandibular Teeth – The teeth located in the mandible

Humans have two sets of teeth during their lifetime.

Primary Dentition – This is the first round of teeth that are often referred to as baby teeth, There are 20 teeth in this set of teeth. There are 10 in the maxilla (upper jaw) and 19 in the mandible (lower jaw).

Permanent Dentition – This is the second round of teeth humans develop. The are2 8- 32 teeth in this set. These are referred to as the adult teeth. The last four teeth being third molars or “wisdom teeth” which may or may not grow. There are 16 in the maxilla (upper jaw) and 16 in the mandible (lower jaw).

The development of the tooth is a very complex process that consist of growing embryonic cells, grow and erupt into the mouth. Although many species have teeth, non-human teeth development is very similar to humans. The different parts of the teeth must develop during the appropriate stages of dental development, which is about six to eight-week sin the utero and permanent teeth begin to form in the twentieth week in the utero. If teeth do not develop at these times, they may not develop at all.

Four Parts of the Tooth

There are four different types of tissues in each tooth. Each tissue has it own function. The tooth is made up of two major components: Crown and root.

The term crown can be used in two different ways. With an anatomic crown, the area is above the cementoenamel junction (CEJ) or neck of the tooth. Its covered completely with enamel. The term clinical crown is also used to refer to the visible area. The bulk of the crown is composed of dentin and a pulp chamber within.

The anatomic root is found the cementoenamel junction is covered with cementum. In the clinical root, any part of the tooth is not visible in the mouth
The crown of the tooth, which is visible in the mouth. The second part is the root, which is under the gums and is anchored to the bone. Within each tooth, the four different tissues are Enamel, Dentin, Pulp, and Cementum. 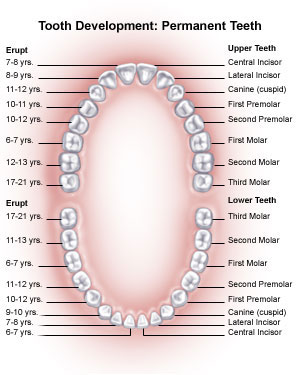 The maxillary and mandibular arch have similar teeth in them. However, there are four types of teeth in the both arches. The four types are – incisors, canines, premolars, and molars. Each of these teeth is located in different areas of the mouth to carry out various functions.

Incisors – They function as scissors. These are the four teeth in the mouth. They are located on both the mandibular and maxillary arches. Th two center teeth are also called the central incisor. On the sides of the central incisors are the lateral incisors. Thy is responsible for cutting or biting food.

Premolars – These teeth are located distal, away from the midline of the mouth. There are four premolars in each arch, and the two are located behind each canine in the arch. The premolars are smaller than molars and crush food during the chewing process. These teeth also only occur in the permanent dentition, not in the primary dentition. 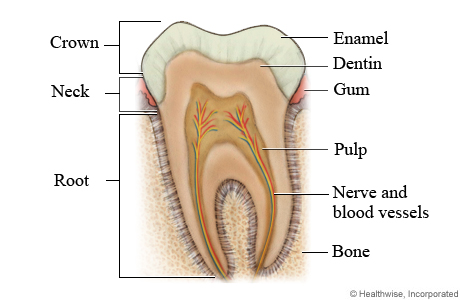 Molars – There are typically six molars in each arch. There are three on the left and three on the right of the side. These are referred to first, second, and third molars. Some people never develop the third molars, as they are very far on the back of the mouth and may have difficulty fully developing. Often these may need to be taken out.