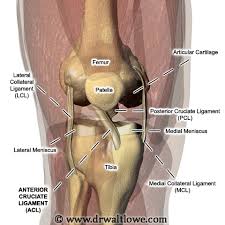 The knee is the largest joint in the body. It is a complicated joint that bears the entire weight and pressure loads of the body, all while providing flexible body movement. When we walk, the knees support 1.5 times the body weight at any given point; climbing stairs – the knee support 34 times the body weight. When you are squatting, the knee is carrying nearly eight times.
The knee joint is called the synovial joint that connects the femur bone, also known as the thigh bone, the longest bone in the body, to the tibia or shinbone, the second longest bone in the body. There are two joints in the knee. First, the Tibiofemoral joint, and second, the patellofemoral joint. The tibiofemoral joint attaches the tibia to the femur. The patellofemoral joint attaches the kneecap to the kneecap.
These two joints work together to create a modified hinge joint that allows the knee to bend and straighten and rotate side slightly to side.

The knee is linked to a chain of structures; that includes the hip, pelvis, upper leg above the knee, and the lower leg, ankle, and foot, below the knee. These structures all work together to provide movement and functionality.
The knee joint bears most of the body’s weight. When you are sitting, the tibia and femur hardly touch: When you stand, they lock together to form a stably connected structure.

The main parts of the knee joint consist of the bone, ligaments, tendons, cartilages, and a joint capsule made of collagen.
Collagen is fibrous tissue that exists throughout the body. With age, collagen breaks down.

The adult skeleton primarily comprises bone and a small amount of cartilage in certain areas. The bone and cartilage connect other tissues. These have special cells called chondrocytes that are planted inside a gel-like material called collagen and elastin fibers. Cartilage consists of hyaline or fibrocartilage which can differ based on the amount of elastin and collagen. Cartilage is tough but flexible tissue that is good with body mass weighing on it. Cartilage has almost no blood vessels and cannot repair itself very well. The bone is full of blood vessels, allowing it to repair itself much better. The bone also has a high water content that enables the cartilage to be flexible.

Bones Inside the Knee

Tiba- often referred to as the shin bone, runs from the ankle up to the knee. The very top of the tibia is mad of two plateaus and protuberance similar to knuckles called the tibial tubercle. Connected to the top of the tibia on each side of the tibia plateaued are two cartilages that are current shaped. These cartilages are called the meniscus and absorb shock to help support the knee.

Patella – This is the kneecap that is flat and triangular bone. The Patella moves when the leg moves. The Patella relieves friction between the muscles and bones when the knee is straightened, bent, or to protect the knee joint. The kneecap descends along the base front surface of the femur between two protuberances called femoral condyles. Femoral condyles create a grove referred to as the patellofemoral groove.

Ligaments of the knee

ligaments of the knee

The knee functions are similar to a rounded surface sitting on top of a flat surface. The ligaments attach bones to other bones and give strength and stability to the knee as well the knee has very little stability. Ligaments are strong, strong bands that are not particularly flexible. Once stretched, they tend to stay stretched, and if stretched too far, they snap.

Tendons in the Knee

Tendons are elastic tissues that are part of the muscles and connect the muscle to the bones. The two major tendons in the Knee are the patellar and quadriceps. The Patellar tendon connects the kneecap to the tibia or shinbone, a ligament. The quadriceps tendon attaches the quadricep thigh muscles to the kneecap and provides the ability to straighten the Knee.

The cartilage of the Knee

If two bones touch each other, there is a joint at the end of the bones. The joint is covered with articular cartilage when the two bones move against each other. Articular cartilage is a fibrous connective tissue that is white and smooth, which covers both ends of the bone and protects the bone during joint movement. The particular cartages of the Knee also cover the feeder bones, the top of the tibia, and the back of the patella. Menisci disc-shaped cushions in the middle of the Knee to absorb shock.

The medical meniscus is crescent-shaped cartilage made of fibrous tissues that are contracted to the tibia inside of the Knee.

The lateral meniscus is crescent-shaped cartilage made from fibrous tissues connected to the tibia outside the need.

The rubbery meniscus cartilage absorbs shock and any side impact on the knee. Menisci lie on top of the tibia and help spread the body’s weight and balance it over a larger area, preventing the articular cartilage from wearing down the bones at the friction points since the menisci are shaped like the socket, locking the end of the femur bone aids the alignment in keeping the knee stable.

The muscles in the leg help keep the knee stable and moving and align the thigh muscles (quadriceps and hamstrings. There are two muscle groups in the leg, the quadriceps and hamstrings. The quadriceps is a collection of four muscles on the front of the thigh responsible for moving a bended knee to a straight position. The hamstrings are three muscles responsible for the thigh muscles and control the knee moving from a straight to a bent position.

The capsule is a compact, fibrous structure that warps around the knee joint. Within the capsule is the synovial membrane, lined by the synovium, the soft tissue that secretes synovial fluid when inflamed, providing lubrication for the knee.

Bursae come in different sizes around the knee. There can be up to 13 sacs that are filled with fluid to cushion the joint and reduce friction between the bones, tendons, ligaments, and muscles. The bursa is underneath the tendons and ligaments, on the medial and lateral sides of the knee. The prepatellar bursa is the largest in front of the knee under the skin, protecting the kneecap. There is as also an infrapatellar fat pad that cushions the kneecap.

Plicae are folded in the synovium. Plicae rarely cause issues but can get caught between the kneecap and the femur and causes pain. 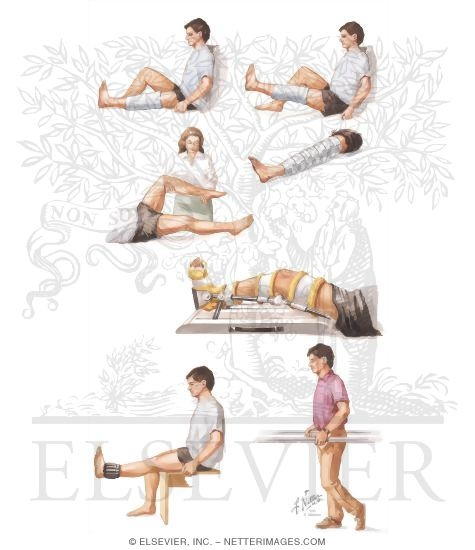 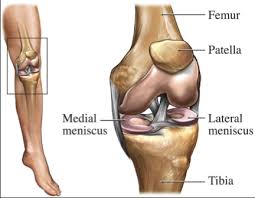