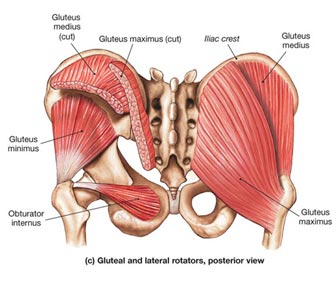 The gluteal region is an area of the human anatomy placed posteriorly to the pelvic girdle at the proximal tip of the femur. The muscles in this area provide movement to the lower limb at the hip joint.

The muscles of the gluteal area can be classified into two unique groups.

Deep Lateral rotators: A group of smaller muscles that operate to laterally rotate the femur. These muscles include the obturator internet, gemellus inferior, gemellus superior, performs, and quadratus.

The gluteal region’s superficial muscles comprise the tensor fascia lata and three glutei. The function is mainly to abduct and extend the hip joint’s lower limb.

Attachments: Originates from the gluteal( posterior) outside the ilium, sacrum, and coccyx. It slants across the buttock at 35-degree angles, then inserts into the iliotibial tract and the gluteal tuberosity of the femur.

Actions. Gluteus Maximus is the main extensor of the thigh and helps with the lateral rotation. However, it is only used when force is required, such as climbing or running.

The gluteus maximus, including the gluteus medius and gluteus minimus, is referred to as gluteal muscles and occasionally referred informally to as the glutes, is the main extensor muscle of the hip. It is the largest and most exterior of the three gluteal muscles and consists of a large portion of the shape and form of each side of the hips. The gluteus, the thick fleshy mass in a quadrilateral shape, forms the prominence of the buttocks.

The large size is one of the most characteristic features of the muscular system in humans attached as it is with the power of maintaining the trunk in the erect posture. Other primates have much flatter hips and can not sustain standing erect.

Actions. Abduct and medially turns the lower limb. During movement, it secures the pelvis, preventing the pelvic drop of the opposite limb.

The gluteus minimus is the deepest and diminutive of the superficial gluteal muscles. It is similar in shape and function to the gluteus medius.

Attachments Originate from the ilium and unite to form a tendon inserted into the anterior side of the greater trochanter.

Actions abduct and medially rotate the lower limb. During Locomotion, it secures the pelvis, preventing the pelvic drop of the opposite limb.

Tensor Fascia Lata is a small superficial muscle that lies toward the anterior edge of the iliac crest. It operates to tighten the fascia lata and abducts and medially rotates the lower limb.

Attachments: Originates from the anterior iliac crest, attaching to the anterior superior iliac spine ASIS. It inserts into the iliotibial tract, which connects to the tibia’s lateral condyle.

Actions Assist the gluteus medius and minimus in the abduction and medial circumrotation of the lower limb. It also performs a supportive role in the gait cycle.

The deep gluteal muscle is a set of smaller muscles underneath the gluteus minimus. The general action of these muscles is to rotate the lower limb laterally. They also stabilize the hip joint by pulling’ the femoral head into the acetabulum of the pelvis.

The piriformis muscles are a critical landmark in the gluteal region. It is the most superior of the deep muscles.

Attachments: Starts from the anterior surface of the sacrum. It then travels inferolateral, through the greater sciatic foramen, to insert into the greater trochanter of the femur.

Attachments: Originates from the pubis and ischium at the obturator foramen. It moves through the lesser sciatic foramen and attaches to the greater trochanter of the femur.

The Gemelli – Superior, and Inferior

The Gemelli are two thin and triangular muscles. They are divided by the obturator internet tendon.

The quadratus femoris is a flat, square-shaped muscle. It is the most minor of the deep gluteal muscles, positioned below the Gemelli and obturator internus.

Attachments: The quadratus starts from the lateral side of the ischial tuberosity and attaches to the quadrate tuberosity on the intertrochanteric crest.

The pelvis is the portion of your skeleton which forms the shape of the hips and supports your buttocks; This is one part of the, but that can not change.

Females have a wider pelvis than males o allow for childbirth, and this causes the femur or thigh bones to form wider. The effect is a wider-shaped butt associated with female characteristics.