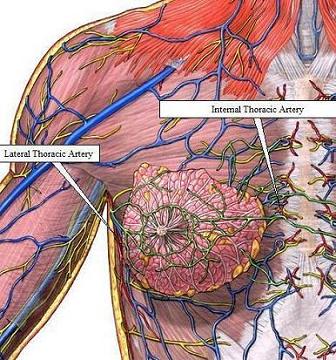 The breast shape will vary fro different people. But understanding the anatomy of the breast will help ensure the safe surgical planning or better explanations of the various components of the breast When the breast is carefully examined, significant asymmetries are presented in most patients. Any preexisting asymmetries spinal curvature or chest wall deformed have to be identified and recorded for the patient as these may be difficult to repair and can become noticeable in the postoperative period. Perioperative photographs with multiple views are obtained on all patients and mounted as part of the office record.

Vascular Anatomy and Innervation of the Breast 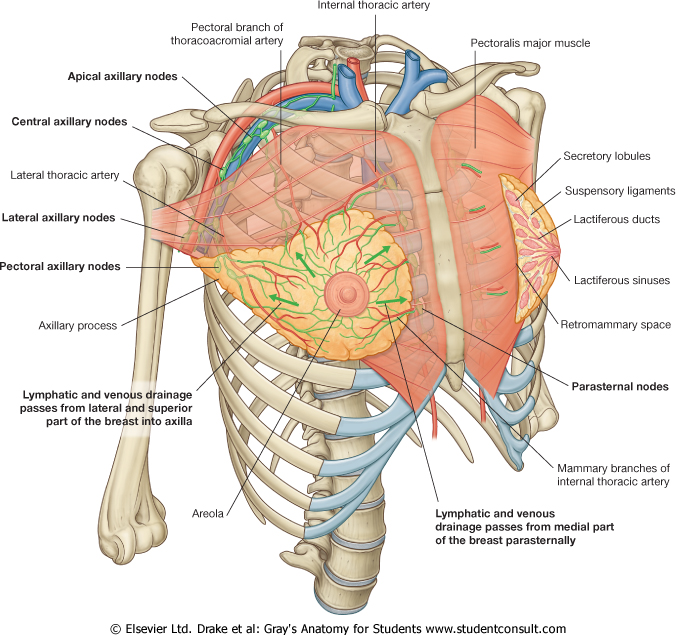 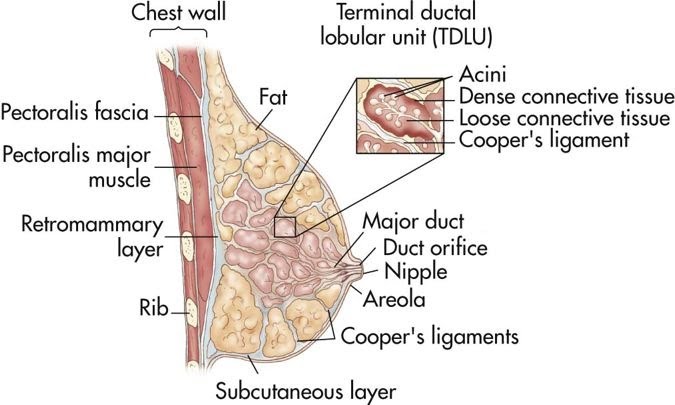 The base of the breast overlies the pectoralis major muscles between the second and sixth ribs in the non-ptotic state. The gland is secured to the pectoralis major fascia by the suspensory ligaments. These ligaments run throughout the breast, tissue parenchymal formed the deep facia beneath the breast and attached to the dermis of the skin. Since they are not taut, they allow for the natural movement of the breast. These ligaments relax with age and time, eventually resulting in breast ptosis. The lower pole of the of the breast is fuller than the upper pole. The tail of Spence stretches obliquely up into the medial wall fo the axilla.

The breast overlies the pectoralis major muscle as well as the uppermost portion of the rectus abdominal muscle infernomedially. The nipple should lie above the inferomedaily. The nipple lies above the inflammatory areas and is usually level with the fourth rib and just lateral to the midclavicular line. The medium nipple-to-sternal notch measurement in a youthful, well-developed breast is 21-22 cm; equilateral triangle created connecting the nipples and sternal notch measures an average o 21 cm per side.

Musculature Related to the Breast
The breast lies over the musculature that encompasses the chest wall. The Muscle involved include the pectoral major, serious anterior, external oblique, and rectus abdominal fascia. The blood supply that provides circulation to these muscles perforates through to the breast parenchyma, thus also providing blood to a breast. By maintaining continuity with the underlying musculature, the breast tissue remains richly perfused, thus limiting complications from occurring from aesthetic or reconstructive surgery that requires placement fo breast implant. 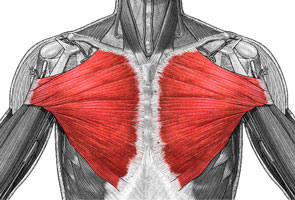 Pectoral Major
The pectoralis major muscle is a broad muscle that extends from its origin on the medial clavicle and lateral sternum to its insertion on the humerus. The thoracoacromial artery produces its major blood supply, while the intercostal perforators arising from the internal mammary artery provide a segmental blood supply. The medial and lateral anterior thoracic nerves present innervation for the muscle, opening posteriorly and laterally. The activity of the pectoralis major is to flex adduct and rotate the arm medially.

The pectoralis major is extremely critical in aesthetic and reconstructive breast surgery because it provides muscle coverage for the breast implant. In reconstructive surgery, the pectorals major muscle covers the implant, providing a reduction in risk of exposure of the implant, because the skin and underlying subcutaneous tissues are often thin subsequent mastectomy, the muscle also provides additional tissue between implants and skin, in turn, depressing palpability of the implant. 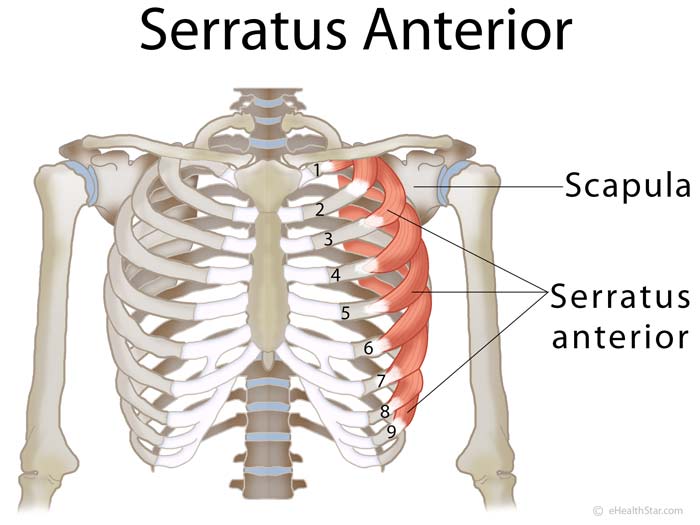 The serratus anterior muscle is a broad muscle that runs along the anterior chest wall. Its origin is the outer surface of the upper borders of the first through eighth ribs, and its insertion is on the deep surface of the scapula. It is vascular supply derived allay form the lateral thoracic artery and form branches of the thoracodorsal artery. The long thoracic nerve assists to innervate the serratus anterior, which acts to rotate the scapula, raising the pint of the shoulder and drawing the scapula forward toward the body. Transection of the long thoracic nerve is carefully avoided through an axillary lymph node dissection because it;s loss result in wringing as the scapula is released from the chest wall and moves upward and outward,
Because the serratus anterior bears the lateral aspect of the breast, in aesthetic surgery, blunt elevation of the pectorals major laterally indirectly elevates a small portion of the serratus muscles. Often the serratus anterior must be elevated sharply to obtain a sufficient muscle layer to provide coverage of the implant.

Rectus Abdominal
The rectus abdominal muscle demarcates the inferior border o the breast. It is an elonged muscle that runs from its origin at the crest of the pubis and interpubic ligament to its insertion at the xiphoid process and cartilages of the fifth through seventh ribs. It acts to compress and abdomen and flexes the spine. The 7th through 12 the intercoastal nerves provide sensation to the overlying skin and innervate the muscle. Vascularity of the muscle is mounted through a network connecting the superior and inferior deep epigastric arteries.

When placing an implant for breast reconstruction, in attempting to achieve complete converge with muscle, the rectus facia must often be elevated to lace the implant sufficiently caudal. This dense, thick facia is often intimately adherent to the ribs below it. Once the facia is elevated and released, proper positioning and expansion of the implant can proceed. 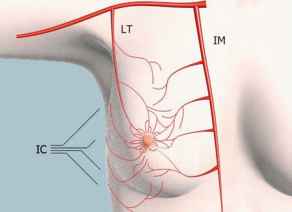 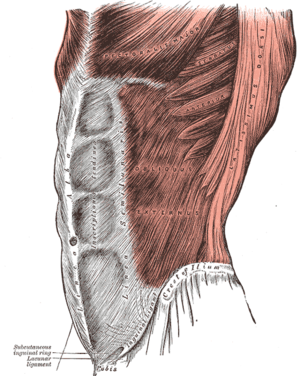 External oblique
The external oblique is a broad muscle that runs along the anterolateral abdomen and chest wall. Its origin is from the lower eigExternal obliqueht ribs, and its section is along the anterior half of the iliac crest, and the aponeurosis of the linea alba from the xiphoid to the pubis. It serves to compress the abdomen, flex and laterally rotate the spine, and depress the ribs. The 7th through 12th intercostal nerves help to innervate the external oblique. A segmental blood supply is maintained through the inferior eight posterior intercostal arteries.
The external oblique muscle abuts the breast on the interior lateral aspect. Elevated along with the rectus abdominal fascia to provide inferior coverage of the breast implant during reconstructive surgery, its faica, like the faica of the rectus abdominal muscle, must be related adequately to accommodate for proper placement and expansion of the implant. In aesthetic surgery, placement of the implant inferiority is usually not below these facial attachments. IF the implant is placed be the facia, the implant often “rides too high” and may reduce in a
“double bubble” effect, where the best parenchyma slide over an off the implant.