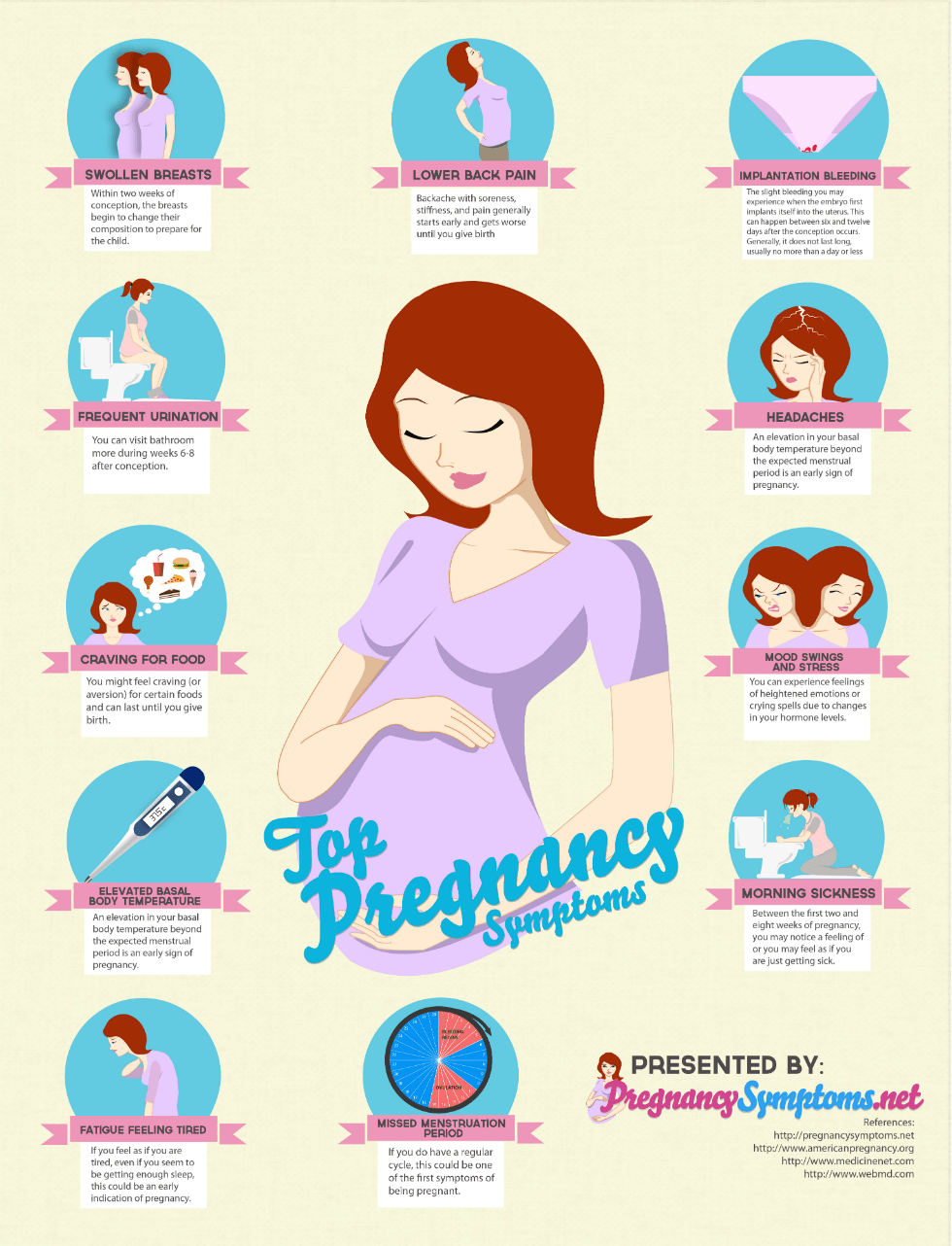 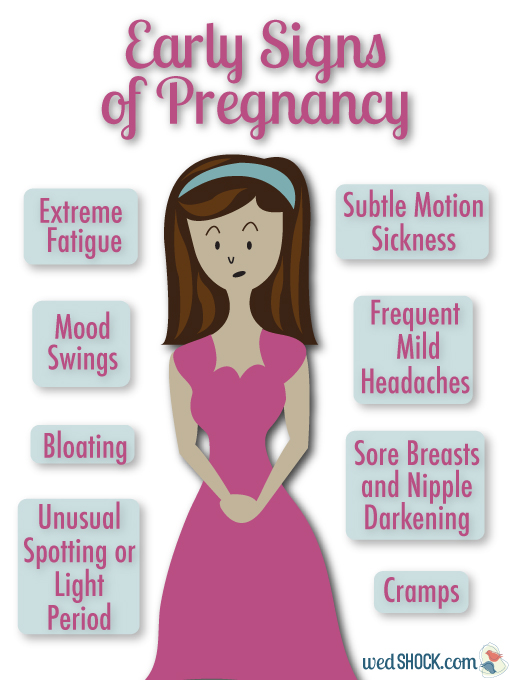 Different symptoms appear at various stages of pregnancy. The earliest symptoms appear in the first few weeks after conception. These initial experiences may be nausea, tender breast, dizziness and mood swings.

The classic Symptoms of pregnancy:

Tender Swollen Breast – Due to hormonal changes, the breast might become tender, sensitive or sore. Breast also my fell fuller or heavier.

Nausea with vomiting and without. This is often called morning sickness. However, it can strike at any time, either day or night. This nausea could begin as early as three weeks after conception. The exact cause of this during pregnancy is not clear though pregnancy hormones most likely a key reason. Pregnant women may find certain smells bothering them, which can lead to nausea.

Increased Urination – You may need to urinate more often than normally.

Fatigue – Fatigue is one of the symptoms that most women experience in early in the pregnancy process. This is due to the hormone progesterone levels soaring, causing you to feel tired.

Food Cravings and aversions. When you are pregnant, you find yourself desiring individual foods or combinations that you may not normally. Alternatively, you may turn away from foods that you loved previously. The exact cause of this is unknown, but these food preferences are due in part to changes in hormonal balances.

There also may be less familiar symptoms such as:

Light Bleeding – Small amounts of bleeding may occur from the vagina as one the first signs of pregnancy. This type of bleeding is called implantation bleeding, which happens when the egg is fertilized and attaches to the lining of the uterus. This process occurs around 10-14 after conception. Implantation bleedings normally last short times and occurs during menstrual periods. Although bleeding from implantation, is usually lighter than regular menstrual bleeding.
Cramping – You may experience mild uterine cramping early within the pregnancy process.
Mood Swings. Hormonal changes occurring in the body during the initial stages of pregnancy can may you feel unusually emotional, where you may start crying for no reason. Mood swings are common symptoms.
Dizziness. Pregnancy causes your blood vessels to dilate causing your blood pressure to drop. This will result in feelings of lightheadedness and dizziness.
Constipation – Changes within your hormonal balance may prevent your digestive system from normally operating, causing it to slow down.
You may also experience changes in your body basal body temperature. Your temperature early in the morning may provide some insight into pregnancy. The Basal body temperature will slightly increase soon after ovulation takes places, and will remain at the heighten level until your next period. If the elevated body temperature lasts more than two weeks, it could indicate your are pregnancy.

Unfortunately, these signs and symptoms do not only indicate pregnancy but may indicate something else. Some of these signs may be that you are getting sick or that your period is about to start. Also, you can be pregnant without experiencing any of these symptoms.
So, if you miss your period or notice that you are having any of these symptoms, you may want to get a take home pregnancy test – specifically if you do not keep track of your menstrual cycle or if it differs each month.

If your home pregnancy test is positive, you should see your doctor to confirm. The sooner you find out, the sooner you can begin prenatal care.

One thought on “Am I Pregnant? What are Pregnancy Symptoms?”